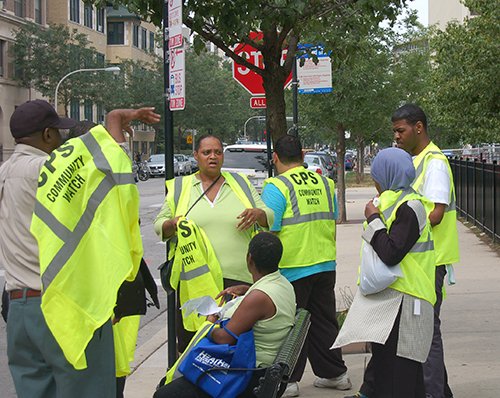 Parents at Brennemann Elementary responded with measured optimism Monday to increased security after multiple shootings along Safe Passage routes within a week of the first day of school, calling into question the pathways designed to give students protected routes to and from school.

The most violent incident occurred on Aug. 20 when five people were shot near Uptown Baptist church at 6 p.m. at the intersection of North Sheridan Road and West Wilson Avenue – just blocks away from Brennemann along the school’s CPS Safe Passage route.

“You can never have too much security,” Stephen said, although she has never felt unsafe in the neighborhood. “But how long will it last?”

After three months of living in Uptown, Frank Maldonado, a father of a kindergartner at Brennemann, said he thinks the neighborhood is a safe environment.

“I saw the workers out early in the morning, they seemed like they were doing a good job,’ Moldanado said as his picked his daughter up after school.  “We’ll see how it goes.  So far, so good.”

“To me, I think it’s great,” said Edna Owusuah, a Brennemann parent of three. “I saw people on every route at every intersection.”

At Brenneman, the workers directed students from the school to waiting parents and buses while keeping an eye on traffic. When one student hurried across Clarendon Avenue to meet a parent waiting in a car, a Safe Passage worker called out for the parent to meet the student at the school instead.

By some accounts, Monday seemed like a typical first day for the 400,000 CPS students returning to school. But, scenes outside schools like Brennemann – where dozens of police and Safe Passage workers lined the streets for blocks – bore the results of a summer of transition and turmoil for Chicago schools.

That transition began when CPS shutdown 49 elementary schools in May, laying off 3,000 teachers and displacing thousands of students in a move meant to combat with a $1 billion deficit, and underperforming and under-enrolled schools.

For parents like Marshell Travis, who’s student transitioned to Brennemann after Stewart Elementary was closed, the first day of school came as a relief.

“I’m just glad they had a school to go to,” said Travis, who said she will wait to see if Brennemann is a good fit for her family.

A number of groups began monitoring the transition progress of students Monday after the historic closings last May.

At Brennemann, Kristen Klanow, a volunteer with the Independent School Monitoring Project, spoke with parents like Travis about their transitioning students. The ISMP is a partnership between Loyola University and the Chicago Lawyers’ Committee tasked with assessing the progress of transitioning students. The group sent about 30 volunteers to talk with parents and students on Monday.

Klanow said the feedback, which the group solicits exclusively from parents, had been generally positive, but it is still far too early to tell how successful the transition will be.

A hotline at 773-916-7484 has been set up by Parents 4 Teachers for parents from closed schools to report problems at the receiving schools.

The organization issued a press release Monday stating that “the Accountability Line will track conditions in the receiving schools so that parents, teachers and community members can hold CPS and the mayor accountable for those promises – and for any harm that befalls students because of the school closings.”