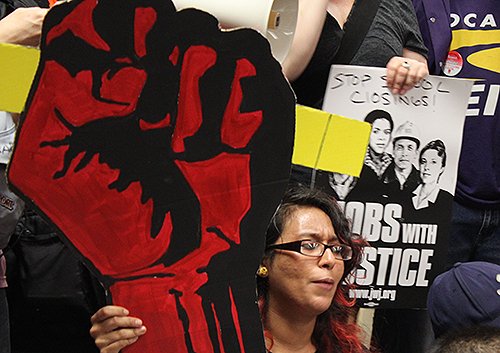 Protesters gather outside of CPS headquarters during the school board vote.
(Photo/Josclynn Brandon)

Board Votes to Close 50 CPS Schools

As angry protestors chanted outside, the Chicago Board of Education voted Wednesday to close 49 elementary schools and one high school, the highest number of schools the city has shut down in a single year.

The CPS board room was packed with 200 people, and even more people watched from an overflow room as angry parents, aldermen and other members of the community spent three hours making final pleas to the board to spare their schools.

It was mostly for naught. In the end, the board voted to close 50 of the 54 schools on its final list, allowing four to remain open: Ericson, Garvey, Mahalia Jackson and Manierre.

Most of the closings came on the South and West sides, many in poor neighborhoods. In the past two months, at least eight large protests and rallies have taken place on the South Side or at the CPS South Loop headquarters.

The final protests came on Wednesday, when hundreds of protesters, parents, teachers and staff poured into CPS headquarters. Some were allowed in, others waited outside under police watch as the board room filled and the overflow room for the public and many media members remained only half full.

Security removed some parents and others who tried to address the school-board out of turn during the three-hour open forum. Some had to be physically restrained as they were pulled away from the microphone and shouted at the school board.

Among those who spoke was Chicago Teachers Union President Karen Lewis, who told the board she would be behind them with their decisions if they pertained to education. Lewis begged the board to not focus on the number 50, but instead focus on creating a better education plan for CPS students.

The teacher's union and a group of parents are challenging the closures in federal court. A four-day hearing is scheduled for July.

Outside, other protesters carried signs and chanted in opposition of Mayor Rahm Emanuel and CPS CEO Barbara Byrd-Bennett. Emanuel and Byrd-Bennett say the closings will save CPS billions, and many of the schools were under-performing or had declining enrollments. Opponents argue that the closings will force many young children to walk farther -- and through dangerous neighborhoods -- to get to school.

Aldermen who had schools closing in their ward were also attended the meeting, including Ald. Bob Fioretti (2nd Ward). After attending public hearings for the past several months, he almost didn’t show up to Wednesday’s board meeting.

“I’m worried that all those hearings were a charade. The decisions were already made,” he said. “The pending proposal to close these schools places an inequitable burden upon African American and Latino communities. It will improve neither the school it closes nor the school that receives these students.”

Despite the public’s plea, the board voted unanimously to close 49 of the schools. The board voted 4-2 in favor of closing Von Humboldt Elementary. At the end of the current school year, 48 of the schools will close and two others will shut down within two years.

The closings will impact nearly 27,000 students.