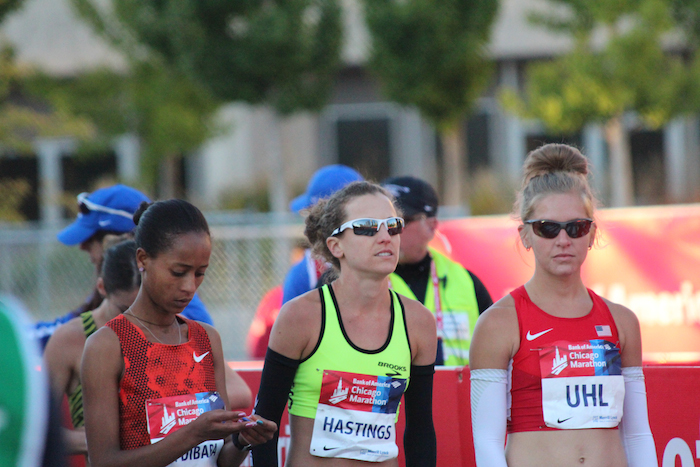 Rita Jeptoo got off to a slower-than-usual start but was still able to win her second consecutive Chicago Marathon in convincing fashion.

Coming into the race, the defending champion was one of the favorites, but it wasn’t until about the 23rd mile that she broke away from her competitors and glided to the finish line.

She knew that at some point, she was going to have to switch to another gear.

Perhaps Jeptoo’s slower start can be attributed to the weather conditions, which had mixed reviews from the athletes. The temperature at the beginning of the race was 46 degrees, with 8 mph winds. By the end of the marathon, the temperature rose a bit to 50 degrees, which many runners described as, “perfect.”

“The weather was not good, because it was windy,” Jeptoo said.

Fellow Kenyan Florence Kiplagatm was not very fond of the weather either: “It was very windy.”

Others didn’t have an issue with the wind, like, the United States' Amy Hastings.

“It was a little windy, but you really can’t ask for better conditions,” Hastings said.

Hastings was promising during the early stages of the marathon. She was in the lead until about the nine-mile mark.

“I was feeling really good for the first bit,” Hastings said, “the crowd kind of got me going.”

Hastings was content with her performance, as she knew she was a bit of an underdog heading into the marathon.

“Just being close to them at any point during the race, gives you a boost,” she said.

Hastings was the top American finisher. She came in fifth place and ended up tying her personal best marathon time of 2:27:03, which she set in Los Angeles, back in 2011.

Jeptoo did not break any persona or course records, as many expected. But she did admit to having the possibility cross her mind.

“When you are training, you feel like you have to try for the world record,” Jeptoo said.

After today’s win, Jeptoo was rewarded handsomely with $575,000, including $500,000 for clinching the World Marathon Majors competition. In all, she took home about $1.6 million, factoring bonuses she received from her sponsors.

A late scratch to the women’s race was Atsede Baysa (Ethiopia), who edged Jeptoo at the finish line in 2012. Race officials did not disclose a reason for her scratch.