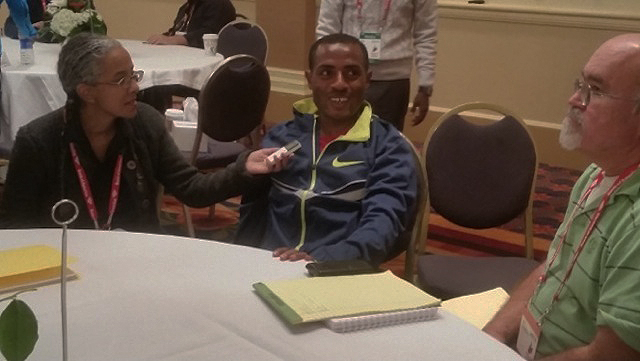 Kenenisa Bekele shares a laugh with the media. (Photo/Kevin Martinez)

One message was clear during the Chicago Marathon’s elite runners press conference on Friday at the Hilton Chicago -- as Sunday's race approaches, all those involved are eager to run.

Race Director Carey Pinkowski mentioned how he was proud of the race because it has improved every year through the collaborative efforts of the athletes and sponsors.

The Chicago Marathon’s course is flatter than the typical race, which is great for the runners. They won’t have to worry about running uphill, meaning are they cleared for smooth sailing. A flat and fast race will can mean records broken, though likely course records and not world records.

Kenya’s Eliud Kipchoge was optimistic about the chances for a record to be broken. But when asked if a runner could ever complete the race in under two hours, he admitted it would take someone truly special to accomplish that feat.

Last year's Chicago winner, Kenya's Dennis Kimetto, set the world record of 2:02:57 on Sept. 28 at the Berlin Marathon. He won't be running in Chicago.

Local Phenom: Tatyana McFadden, a recent graduate from the University of Illinois at Urbana-Champaign, has dominated the women’s wheelchair race in recent years. She has won four out of the last five years since her debut in 2009. The year she didn’t win, in 2010, she placed third overall.

Although McFadden is originally from Baltimore, she loves to be able to race in the state she calls her, “second home.”

“I just found a love for Illinois,” explained McFadden, “My coach is there, my teammates are there, and also a great academic program.”

Health and Nutrition: These elite runners are some of the world’s top athletes. But, in order to compete at a high level during each race, they must make sure to take care of their bodies. Along with training, the runners need to rest and eat properly.

Loading up on carbohydrates a few days before a race is a method that is used to make sure their bodies don’t hit a wall during a marathon. Some popular forms of carbs include, whole grain breads, oatmeal, potatoes and pastas.

McFadden said their meals must include vegetables and protein as well, in order to keep a good balance.

Kipchoge also agreed that nutrition is important. He said, “My agent always has a sports drink for me.”

Silver Anniversary: Pinkowski is celebrating his 25th year as the Chicago Marathon race director. Asked about the growth of the race over the last quarter century, Pinkowski cited partnerships and corporate sponsorships as keys to the event.

"Chicago has become a running city, no doubt about it," he said. "We have a real team atmosphere here.

"We built it from the ground up. We never lost sight of the fact that the race day experience is so important."

CTA Options: Thirty-four bus routes in the vicinity of the marathon will be affected with intermittent reroutes or delays related to lane closures, and the CTA recommends that customers allow extra travel time. Also, the Grand, Monroe, Addison and Chicago Red Line stops are all within a few blocks of prime viewing areas for the marathon. Read more

Fast Facts: Race introductions and ceremony start at 7 a.m., wheelchair race at 7:20 a.m. and elite runners at 7:30 a.m. This is the 37th year for the marathon. It passes through 29 Chicago neighborhoods and attracts an estimated 1.7 million spectators to watch a field of nearly 45,000 runners make the 26.2-mile journey. ... The Nike Training Club marathon pre-party is scheduled for noon Saturday at NTC Studio Chicago, 675 N. Michigan Ave. ... Family and friends can reunite with runners at the 27th Mile Post-Race Party at Butler Field in Grant Park (open 9 a.m. to 3:30 p.m.)