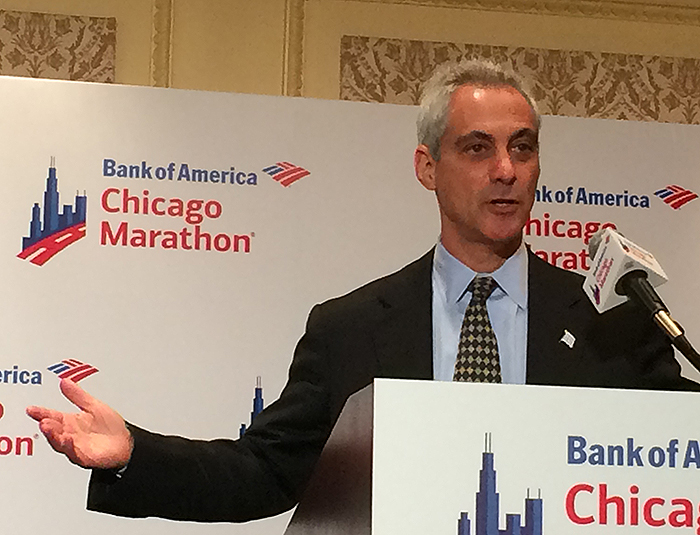 The 37th annual Chicago Marathon kicked off Thursday with its customary pre-race press conference at the Hilton Hotel. Though the race isn’t until Sunday morning, there was plenty of discussion surrounding this year’s event and what it will mean for Chicago.

The theme of this year’s race is “Life is better when we’re connected,” something that Mayor Rahm Emanuel said fits the the idea behind the marathon “perfectly.”

Men’s Elite Field Down This Year: Although there will be five men that have eclipsed the two-hour and five-minute mark in this year’s elite field, including Ethiopia’s Kenenisa Bekele and Kenya’s Eliud Kipchoge, the real story is who won’t be there.

Most notably, Dennis Kimmetto of Kenya will be sitting this one out after he competed in a revamped, more runner-friendly Berlin Marathon two weeks ago, where he set the world record of 2:02:57. A small bit of irony here is that this comes on the 30th anniversary of Steve Jones’s 1984 world record, the first world record to be set during the Chicago Marathon.

Economic Impact: The numbers for this year’s race obviously won’t be in for a while, but the numbers for the economic impact of last year’s marathon are downright impressive. Overall, the event created some $253.5 million worth of economic impact for Chicago. For every dollar one of the 40,900 runners last year spent, $1.29 went through the Chicago economy. That translated into $85.94 million in total wages during that weekend.

This year, Race Director Carey Pinkowski hopes a new partnership with healthcare giant Abbott will help boost this already huge economic influx. But the buck didn’t stop there. Charitable giving was huge, too, and this year 194 charities will be receiving money from the race.

“The marathon is a phenomenal platform for charitable giving,” Pinkowski said. He added that the race’s 12th mile will be called the “Red Mile” in honor of the AIDs charity RED.

Security: In the aftermath of the Boston Marathon bombing in 2013, security was amped up considerably for the Chicago Marathon. The same is to be expected this year, with a heavy police presence all around the course, which goes through 29 different neighborhoods.

On Monday, city officials said there were plans in place to address any issues with Ebola surrounding the marathon, although there was no imminent threat. The deadly virus from west Africa has only been found in a few people in the U.S., with only one fatality. EMS acting district chief Mary Sheridan told NBC Chicago that all of her medical personnel are trained and prepared for dealing with communicable diseases, even Ebola.

“As far as runners that are coming from areas where Ebola has struck, our runners are all coming from east Africa,” Marathon Medical Director Dr. George Chiampas told NBC.

Milestones: This year’s race marks a few special milestones worth noting. As previously mentioned, it is the 30th anniversary of Steve Jones setting a world record in the Windy City. This year’s race also marks 30 years since the first Wheelchair competition was included in the marathon. That year (1984 if you’re doing the math) only five men and one woman competed in the Wheelchair competition. This year, that number will be in the thousands.

Pinkowsi is also celebrating 25 years at the helm of one of the world’s six major marathons. During Thursday's press conference, he was given a huge frame filled with photos of all of the world records that had been set at the marathon during his tenure, as well as photos of a much younger Pinkowski running the race himself.

“He may not be running on the streets, but he’s running the show," said Tim Maloney, Illinois President of Bank of America, a race sponsor.