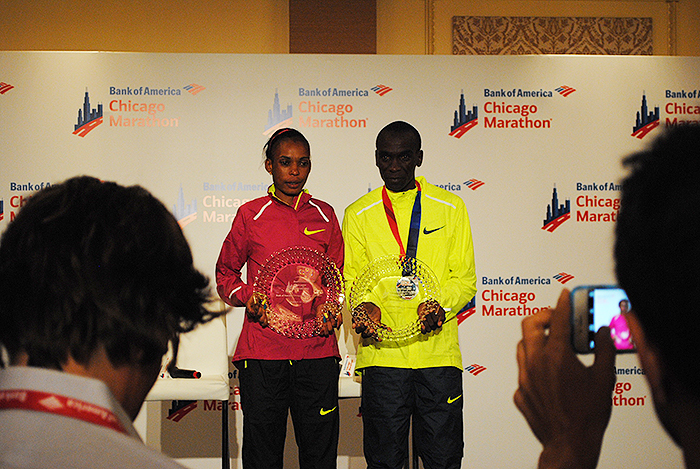 Winners Rita Jeptoo (left) and Eliud Kipchoge pose for the media with their trophies.
(Photo/Scott Sutton)

Race Notebook: U of I Sweeps Men's, Women's Wheelchair Divisions

Josh George and Tatyana McFadden made the University of Illinois at Urbana Champaign proud on Sunday with victories in the wheelchair divisions at the Chicago Marathon.

McFadden continued her dominance by winning the event for a fourth consecutive year. She finished with a time of 1:44:50. “The beast,” as McFadden is proudly referred to as, has now won the city’s marathon five out of the last six years.

George has not always completely destroyed the competition, like McFadden, but he has had his own share of success. George’s win today, with a time of 1:32:12 was his fourth overall victory in Chicago. He also took home a $12,000 check.

Although both were impressive during the race, those victories did not come easily.

George’s race finished with about 15 racers near the finish line.

“This is the biggest pack sprint I’ve ever been a part of,” George said.

“It was a bit insane,” he said, “anytime someone tried to move, there was a score of guys ready to respond to it.”

McFadden was in a similar situation. “I looked back and got very, very nervous,” she said.

In the end, both athletes praised the U of I for its training program, which focuses on wheelchair athletes. Adam Bleakney is the leader of the school’s wheelchair track and field program. He was named the United States Olympic Committee (USOC) Paralympic National Coach of the Year in 2014.

“I just love doing it,” McFadden said. “I’m always thinking ways of how to get faster and how to get stronger.”

Three out of the four top finishers in the women’s wheelchair race, were U of I alumni.

A Party in Lakeview 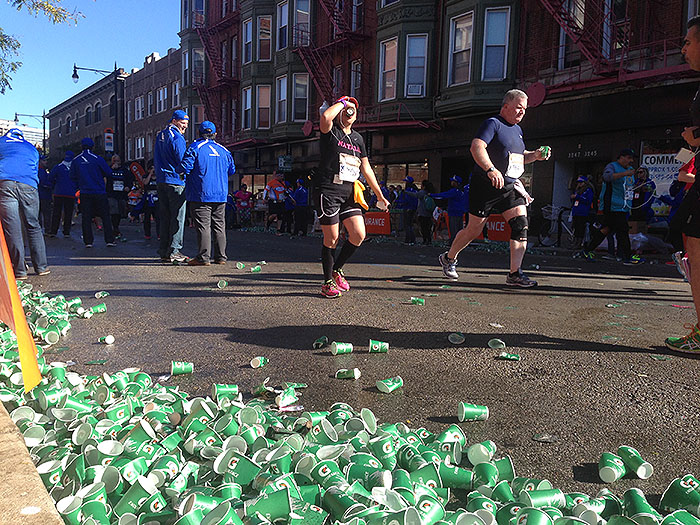 Gatorade cups stack up along the curbs in Lakeview. The city has to clean it up. (Photo/Alex Johnson)

An estimated 1.7 million spectators lined the streets of Chicago Sunday morning to show their support for the participants at the Chicago Marathon.

While the marathon runs through 29 of Chicago’s neighborhoods, the hub of excitement always seems to be in Lakeview.

Lakeview, or the 44th Ward of Chicago, is home to both Wrigley Field and Boystown, and has earned a reputation for being one of Chicago’s most wild, fun and diverse neighborhoods. The marathon crowd in Lakeview made sure it lived up to the reputation.

From colorfully worded signs, to men dressed in drag, participants of the Marathon were warmly received and celebrated for the three-mile stretch that ran through Lakeview on North Broadway Avenue. 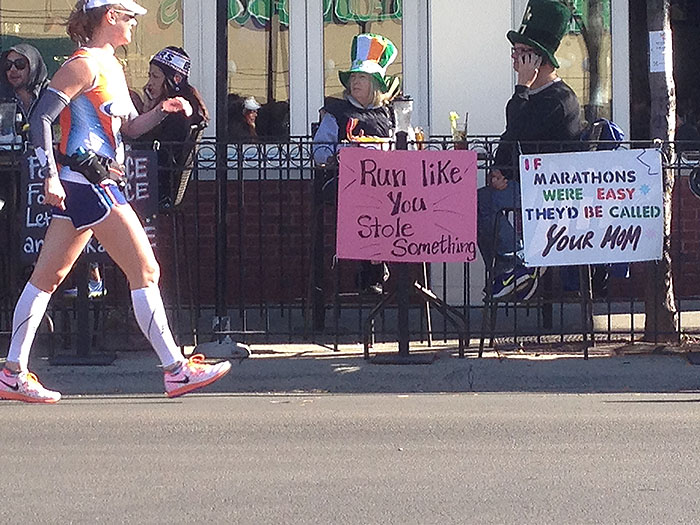 Signs mocking the marathoners are a tradition in Lakeview. (Photo/Alex Johnson)

Loud boom boxes on each corner and cheerleaders dancing in the streets set the precedent for what would ultimately become a block party. Many local businesses even closed for the day to join the festivities.

Dominic Johns, 23, has lived in Lakeview for four years. He said that the marathon has become one of his favorite days of the year. Johns, who was wearing face paint and ringing a cowbell, woke up at 5 a.m. in order to get ready and make it to the route in time to support the runners.

“It’s days like today when you realize how awesome the people of Chicago really are,” Johns said. “There’s so much love and encouragement from everyone around you. It’s something else.” 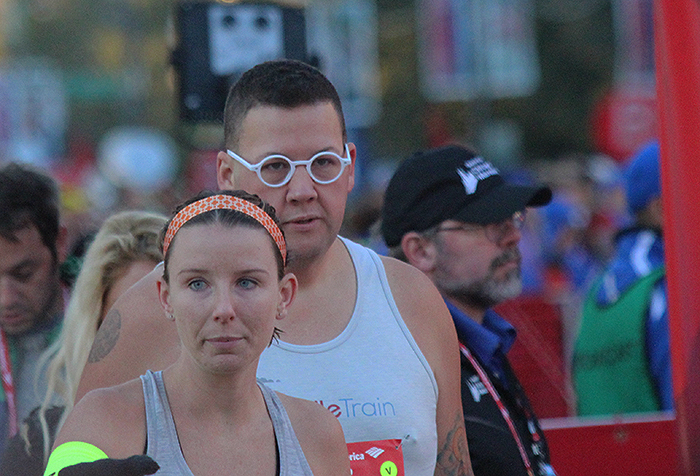 Fast facts: Chicago celebrity chef Graham Elliot ran his first marathon with his wife, Allie. Elliot said he ran the race to become more healthy. He's lost 150 pounds in the process. ... Temperatures were at 46 degrees with 8 mph winds at the start of the race. Temperatures hovered in the high 40s and low 50s for much of the race. ... Reports from the race course had one runner competing barefoot and another dribbling two basketballs -- one with each hand -- as he ran. No report on whether he was called for traveling.

Elite runner Wesley Korir of Kenya has a breakfast ritual for each race -- a tuna fish sandwich. ... The men's elite field was, on average, much younger than the open men's field, which averaged 39.5-years-old. But for 29-year-old winner Eliud Kipchoge, the third oldest top-10 finisher, having that experience was helpful. "To run a marathon you need good preparation and experience," Kipchoge said. "I am now fully experienced."