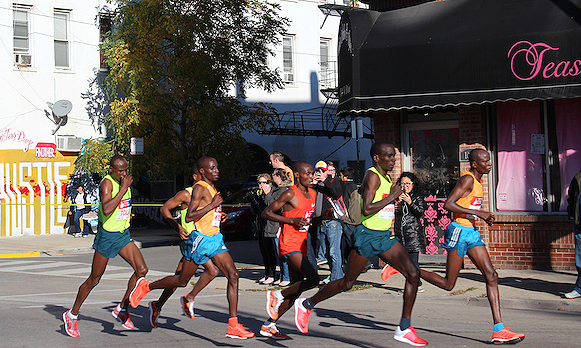 It was a brilliant Sunday for Kenyan runners as they swept the top three spots in the men's race and took the top two spots for women at the Chicago Marathon.

With clear skies and temperatures in the mid 40s, 29-year-old Eliud Kipchoge paced the men's elite field, finishing the 26.2 miles in 2 hours, 4 minutes, 11 seconds. His win came among a slightly down men's elite field, but was still an upset with perennial pros like fellow Kenyan Sammy Kitwara (second, 2:04:28) and Ethiopian Kenenisa Bekele (2:05:51), who placed fourth.
"I enjoyed the race from start to finish," said a beaming Kipchoge.
He has good reason to smile, as both the men's and women's winners each receive a $100,000 prize out of a total purse of $550,000.
But the race was far from jovial as the top four runners stayed within one minute of each other's pace for the entire run. In fact, at the 25-kilometer checkpoint the top 10 men's runners at that point were only two seconds apart. Only a few kilometers after that, at around the 28-kilometer mark, a group of three men -- Kipchoge, third-place finisher Dickson Chumba and second-place finisher Sammy Kitwara  began to leave the pack and Bekele behind.
"Maybe it was the time difference," said Bekele, referring to the eight-hour time difference between Chicago and his home in Ethiopia. "Also, I was tired because I couldn't sleep because of [the time change]."
Multiple runners and wheelchair racers noted that there were sections of the course, especially when heading East, where headwinds were an issue, causing them to slow and hunch together. But the wind never seemed to be a problem for Kipchoge.
"After 30 kilometers it was not easy," Kipchoge said. "I kept pushing, but Kitwara was still there. After 40 kilometers, I pushed harder and I succeeded."
That final push in the 24th mile as he rounded into Grant Park was enough put Kipchoge ahead of Kitwara once and for all and allowed him to win his first major marathon.
Bobby Curtis was the top American finisher, coming in ninth place with a time of 2:11:20. He averaged a five-minute mile and 11.98 mph for the day, well behind Kipchoge's 4:44 mile  pace and 12.67 mph speed.
"All in all, it went really well this morning," Executive Race Director Carey Pinkowski said. "You know it's the marathon, and it became tactical racing. You had the women watching each other a little bit and making moves. And with the men it became more gamesmanship."