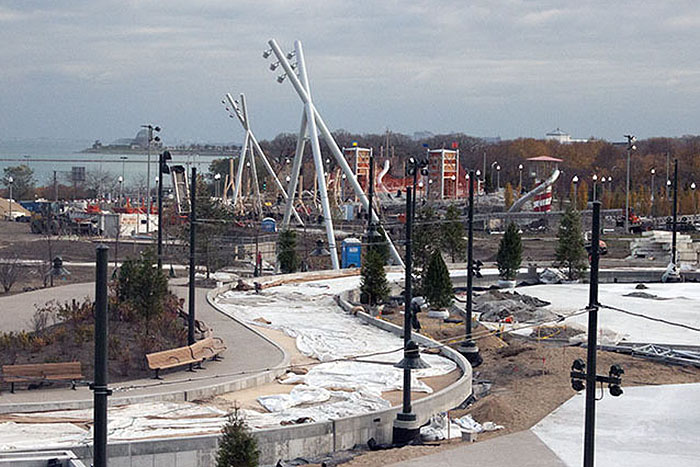 Maggie Daley Park Soft Launches, to be Completed in Spring

By Anita Lukacs and Clare Edlund

Chicagoans are expectant of the city’s latest project and new addition to the Loop, the Maggie Daley Park, however they don’t know much about it.

Kiersten Logan, who lives in the area, walks by the park daily with her two children.

“Since we’ve been here in August I have not gotten a lot of information,” Logan said. “Even here where I think the marketing would be prevalent and whoever is in charge of the marketing for Maggie Daley Park would be promoting it, but perhaps the marketing department is waiting for it to open before they start talking about it.”

Although multiple news sources and media have covered the construction of Maggie Daley Park, some Chicagoans who work and live nearby are unaware what the park will have to offer, when exactly it will open and what it will mean for them.

“I did a little bit of research about how much it cost, I just climbed the fence a little bit took a peek over, and aside from that [I know] very little [about Maggie Daley Park],” said Andrew White resident of Chicago living in the Loop.

“I really don’t know anything about the park; I just know probably what I see, namely that there’s a lot of construction going on and there appears to be a large area that will be a children’s playground,” said Sigmund Getz who lives in the greater Chicago area and likes to visit Millennium Park with his family. 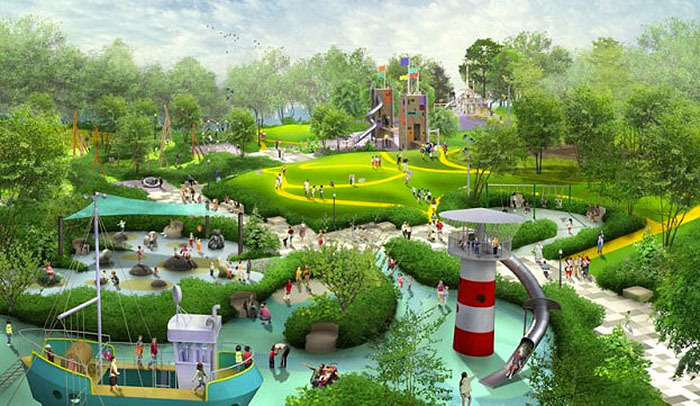 Rendering of the park. (Courtesy graphic)

Maggie Daley Park cost $55 million, which is being paid for by public and private money as well. Payment on the public’s behalf is covered through the leasing of parking garages underneath the park and other capital funds from the park district budget.

The park had a soft opening in November. Construction is expected to be finished by early next year and the park will be accessible to the public in the spring of 2015.

The concept park, named after Chicago’s former First Lady, Maggie Daley, takes after the same idea that was behind Millennium Park.

“If you brand parks, create some excitement, put some marketing behind it you create kind of a new urban identity,"said Joe Schwieterman director of the School of Public Service at DePaul University. "Now Maggie Daley Park is the second installment of that; great success with Millennium Park, now let’s catch on that enthusiasm and have a second companion park."

Schwieterman, also pointed out that unifying the underappreciated green space into a more consistent, activity-rich destination will allow more interaction with the community.

“Grant Park is one of Chicago’s great parks, but it has always been underutilized; it’s been criticized for being kind of a ghost town,” Schwieterman said.

Formerly standing in place of Maggie Daley Park, were the Daley Bicentennial Plaza, the Cancer Survivors’ Garden and Peanut Park, which were all part of Grant Park. According to Chicago Park District, the new park will not only synthesize those three individual areas, but will also create a cohesive, universally accessible space with entrances from the north-south and east-west axes.

Maggie Daley Park promises to offer a variety of activities, according to a Chicago Curbed review. In contrast to Millennium Park, it will have a flowing grassy landscape with hills and valleys designed to eliminate road noise and to offer better views of the city and lake. Sporadic play structures with water features, mini-golf facilities, climbing walls, and an ice skating ribbon around the park will all be available for the enjoyment of the public.

“We’re really excited. I think most families that are living in this area are thrilled,” Logan said. “I haven’t seen the rendering so I don’t know the full scope of what it’s going to be or what it’s going to look like, but [with] the caliber of talent that is going into the landscaping and architecture in general, I got to think it is going to be amazing.”

Laurie Marston, planning consultant at Laurie Marston and Associates, said she believes it will not only cater to locals, but also the suburban neighborhoods and tourists.

“As a planner, I have seen that it serves several different purposes,” Marston said. “With a park that’s well-used and well-liked, it is also a spin-off to the city." 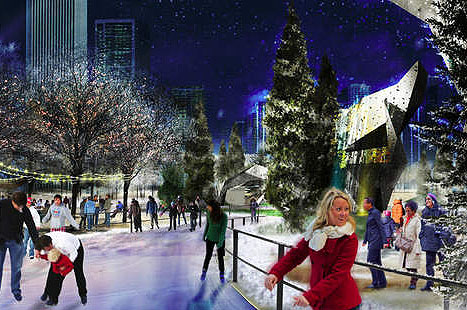 Rendering of the ice skating ribbon around the park. (Courtesy graphic)