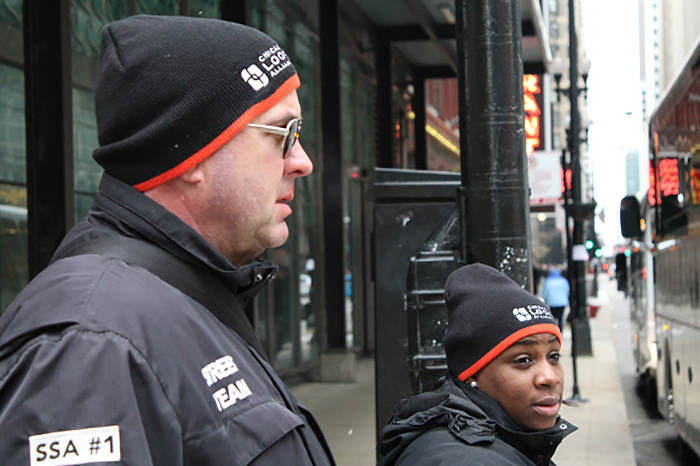 Paul Guthrie (left) and Dominique Mitchell (right) stop at every street corner on State Street, looking to help anyone in need.
(Photo/Joseph Troiano)

By Cheyenne Bowers and Joseph Toriano

For many Chicagoans, State Street is merely a path they take during their morning commute or a crowded sidewalk filled with tourists. But for the Street Team Ambassadors of the Chicago Loop Alliance, State Street serves as their office.

For a little over a year, the six ambassadors have taken to the streets to assist with “quality-of-life” issues including directions for tourists, reporting areas in need of cleaning, and providing aid to the homeless, directing them to resources like food, clothing, shelter, transitional housing and employment.

In doing so, the Chicago Loop Alliance collaborates with the City of Chicago and many organizations to ensure the homeless receive the support they need.

“We work in conjunction with the department of Family and Supportive Services. We attend their monthly meetings, talk about different outreach programs, they try to reach out to people, like on Lower Wacker Drive or in desperate situations, trying to get people off the streets,” said Program Manager Paul Guthrie.

The ambassadors patrol the streets everyday providing “extra eyes” and assisting anyone that comes their way.

While on duty, the ambassadors realize that many of the issues that the homeless on State Street deal with go beyond a place to rest their head at night. Guthrie says substance abuse is also very prevalent among the homeless in Chicago

“It is not a secret that a lot of people are out there, they are addicted to drugs and that is probably the number one issue that people are dealing with out there,” Guthrie said.

Other homeless Chicagoans may be suffering from mental illness, putting Street team ambassadors like Dominique Mitchell to the test.

“You have to have patience to do it. You have to have a passion I believe too,” Mitchell said. “If you don’t have that then you get easily frustrated and you want to give up, yourself.”

That patience and passion allowed the six ambassadors to move 13 people off the street last year through counseling and the arrangement of resources. However, even with success, Guthrie says the problem still persists.

“Those 13 people have left, but there’s people who step right in to take their places,” Guthrie said. “For everyone who leaves the street, there is always going to be someone new coming in who needs assistance. It is very sad.”

Heartbreak may be a part of the job, but Mitchell says the moments of happiness make it all worth it and she is looking forward to who they can help in the future.

“Some of the people who were out there, they have moved on to apartments, received Supplemental Security Income benefits, and living a much happier life, “ Mitchell said. “I can tell you that one person has benefited from being out there for 24 years and now he has a stable place where he’s living.”

An August 2014 analysis by the Chicago Coalition for the Homeless estimated a 19.4% hike in the population totaling to 138,575 homeless Chicagoans during the course of the 2013-2014 school year. With these numbers, winter can be a trying time for those without shelter, and the street team ambassadors endure the elements to try and help the homeless, even when they refuse.

“As the weather gets worse, a lot of people take advantage of shelters, but there are still those hard core individuals who live outside and they refuse to get any further assistance,” Guthrie said. “We were out there in the 40 below windchills last year. Through the hectic weather, we were out there with the people that were still out there.”

Michael Edwards, President and CEO of the Chicago Loop Alliance, knew there was more that could be done to help reinvigorate downtown Chicago and decided to create what has become a successful source of assistance and support.

“The Street Team is a natural evolution of our ongoing efforts to cultivate and manage a consistent, high-performing experience in the Loop,” Edwards said in a Chicago Loop Alliance press release announcing the launch of the Street Team Ambassador program.

Chicagobusiness.com reported that funds for the program provided by the Chicago’s Special Service Area (SSA) program total close to $485,000. The budget includes the Street Team ambassadors’ salaries and uniforms.

The funds also cover the team members’ radios and iPads, which Guthrie says have made a positive impact on their work.

“One individual, his wife was arrested, and he was trying to find information on where her location was. With our tablets and smartphones, we were able to find where she was being held and when the court date was,” Guthrie said.

“We were able to give him that information, where he may not have been able to find that without someone else’s assistance.” 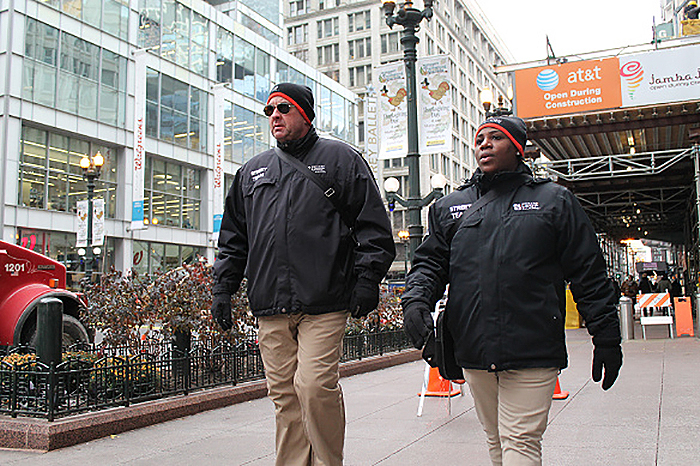 Each of the ambassadors has a background in social service, and is trained to communicate with other people, but Guthrie says that doesn’t make the job any easier.

“It takes a while to develop a report with people,” Guthrie said. “We worked the streets for a while just getting used to people’s faces, they got used to ours.”

Building those relationships with the less fortunate is why Street Team ambassadors like Guthrie say they stay on patrol.

“We slowly, one by one got to know people and they would start getting more personal with us, telling us what their issues were, what drew them to the streets, and what tragedies have happened to them,” Guthrie said. “That is the main reason they are out there.”

Both Guthrie and Mitchell say the public sees the homeless that line the street as a nuisance to the public, but as ambassadors, they see who these people really are and who they want to be.

“I fully anticipate the State Street Commission to extend the initiative for another year when they meet in December,” Jones said.

After a year of work, Guthrie and Mitchell say their mission has not and will not change. The Chicago Loop Alliance State Street Team will continue to make positive changes to a city in need of renovation.

“We still want to assist these people who are out here,” Guthrie said. “There are a lot people that don’t want help. It takes a lot to get to know people. We can’t change them, they need to change themselves, and we are here to support them, and we want to get in touch with more of the people.”

Added Mitchell: “Hopefully we can encourage somebody else this winter to get off the streets. That is what I am looking forward to this winter.”