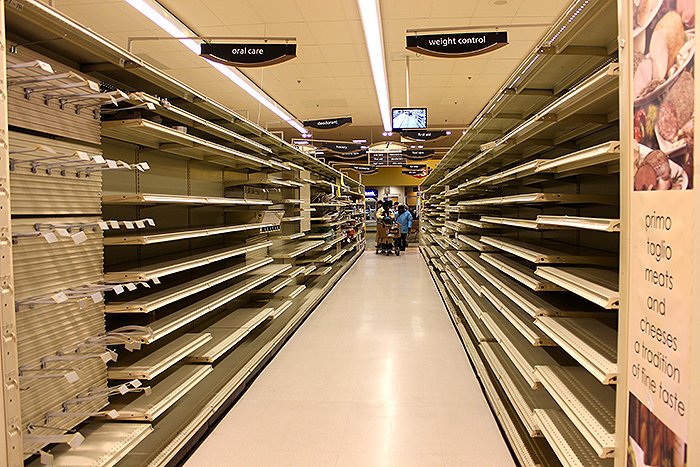 Barren shelves at a Chicago Dominick's. The grocery chain closed its Chicago stores in late 2013.
Whole Foods will take over the Dominick's spot near DePaul University. (Photo/Emily Brosious)

Preparing the night’s dinner used to be a quick enough task for DePaul University students who live on or near campus. After class, anyone heading toward the Fullerton El station could make a brief stop at the Dominick’s adjacent to it.

The grocery trip that used to take all of 10 minutes can now take up to two hours.

Ever since the Dominick’s franchise closed on Dec. 28,  the DePaul student body has been struggling to find a replacement for the conveniently located go-to grocery store. A Whole Foods is scheduled to open there in 2015, but the year-long gap between Dominick’s closing and Whole Foods’ opening has put a dent in the wallets of students and some Lincoln Park residents.

“Since I’m a commuter, Dominick’s was really useful for me,” said Ymn Ghalyoun, a sophomore at DePaul. “I’m out from early morning until night, and I can’t pack a day’s worth of food with me. Now I have to figure out where to get good food from that isn’t as expensive as the places around here.”
A few grocery stores, such as Aldi, Jewel Osco and Treasure Island, are located at the very edges of Lincoln Park’s borders – more than half a dozen blocks away, at the least. The rest of the neighborhood is rife with branches of 7-Eleven, Walgreens, and CVS. In fact, within half-mile of DePaul’s campus, there are seven convenience stores and zero grocery stores.

Most people interviewed for this story shared a similar description of their shopping experience after the closing of Dominick’s. A trip to one of the grocery stores on the borderlines needs to be planned out meticulously. On average, it takes about 20 minutes to get a grocery store via CTA from the DePaul campus. But students have to plan for extra time in anticipation of delayed buses, which is a common phenomenon for some of the routes.
Since people can carry only so much, students also must make sure to bring along a cart of their own to carry the groceries back home. This also limits how much stuff can be bought – students like to buy a lot of groceries in order to make fewer trips, but they can only buy what can fit into the cart before it collapses.
There you have it: 30 minutes to change and get ready, 30 minutes set aside to get to the grocery store, an hour for shopping (which entails constantly exchanging items and figuring out what can fit into the cart), another 30 minutes set aside to get home, and a final 30 minutes spent to put away the groceries and recuperate from the tiring trip. There goes three precious hours out of the hectic day of a busy college student.
Dollars to Doughnuts
While a new place has opened relatively closer to DePaul than the other grocery stores, Mrs. Green’s Natural Market is still a bit pricey for students like Jill Theile, a DePaul sophomore.
“I know Whole Foods will be opening up next year, but I don’t think I’ll be going there,” Theile said. “I heard that they only sell organic food and are expensive, so I don’t think that will solve the grocery issue for me.

Not everyone can afford high-quality food, especially when on a tight student budget.
(Photo/Nabila Rizvi)

Others, like junior Samreen Ahmed, are lucky enough to go home each weekend, stocking up on home-cooked meals to last them until the next trip.
“But I still used to get milk or other small things like that, not realizing how great it was having Dominick’s right here and not having to pay much,” Ahmed said. “Now I have to do so much planning beforehand for these stuff.” To hold her over until she can go home, Ahmed ends up going to the student center’s cafeteria more often.
Besides the fact that getting basic items like milk, eggs, and bread at a Walgreens is significantly more expensive than shopping at an Aldi, there is also the issue of health to be considered.
Health Takes a Hard Hit
For the student tight on time, taking a long trip on the CTA to a distant grocery store – only to buy as much as can be carried during the journey back home – is not a viable option. The only alternative is to buy highly-processed foods from convenience stores or to order out.
The result may be delicious, but it’s also detrimental to the consumer’s health.
A study by the Mari Gallagher Research and Consulting Group has found clear links between living in a food desert and increased health risks. The 2006 study saw an increase in cardio-vascular diseases, cancer, and death rates among Chicago neighborhoods that were declared “food deserts.” Mari Gallagher herself did in-depth research, and her work was recognized as being valid by organizations nationwide.
“I wouldn’t classify Lincoln Park as a food desert,” said Gallagher in a phone interview. “I know Dominick’s closing has made life difficult for a lot of people though, and that is an issue because people are hurting themselves by eating unhealthy.”
With the current situation, the cost of time, travel, and healthy food becomes more expensive for residents. It’s much more convenient and cheaper to go for the quick-and-easy bag of Cheetos versus the laboriously-attained carrot sticks. But ultimately, the health hazards catch up to those who consume more unhealthy food as a result of the food desert.
“I’ve been living here over the past two years,” said Zargham Abbass, a medical student from Spartan Health Sciences University who frequents the DePaul library between clinical rotations. “I can see the difference that Dominick’s has made – without any place nearby, I end up ordering pizza more often or going to Potbelly.”
Abbass went on to explain the lasting effects of eating unhealthy food. For students, fatigue and under-performance in school is common if the only diet they follow is made up of take-out. The students’ health then takes a toll on their grades and personal lives, landing them in a tough spot that they wouldn’t have been in if they simply had a grocery store nearby.
Food in the Future
Until the Whole Foods opens up off of the Fullerton stop, people have been sharing stories that have a common theme: going farther for healthy, inexpensive groceries is difficult so they end up going for fast-food. The long-term effects on health and wealth are detrimental, even if they are habitual for just this year. For some, the Whole Foods won’t make a difference in their problems since it can get expensive.
The expert on food deserts, Gallagher, gave some advice for those trying to get through this difficult time. “There is no one solution to this, because there is no one single problem causing this situation for you,” Gallagher said. “So try different things – gardening individually and as a community is a big help in moving forward, eating healthy, and not having to pay huge amounts of money. Not only will your personal situation get better, but your city’s sense of community will too.”