Eating food for a living is a dream job for many. While Chicago Tribune restaurant reporter Kevin Pang agrees that it’s pretty awesome, he describes it as a bit of a curse, too.

“It’s like if you were ever caught smoking when you were a kid and your father made you smoke the whole pack as punishment. That’s my life,” Pang says half jokingly.

Part of the three-person team that covers food in Chicago for the paper, Pang spends his days sampling everything from charcuterie boards to fried chicken and french fries with gravy, cheese and bacon. He’s been nominated three times for a James Beard Foundation Award.

The Chicago Tribune has been his home since he moved to the city nine years ago after starting his journalism career as a hard news reporter at the Los Angeles Times.

Pang made the jump from covering the courthouse to cooking when the Tribune was looking to expand their features staff. But he was hesitant to make the move.

“If I went to features, the road to getting back if I wanted to would be hard,” he said, admiring the adrenaline rush of election night reporting or breaking news stories.

“You can take all the tenets of hard news reporting and apply it to features,” Pang said. “I’m not just writing 100 words about quinoa. Any time I get to be a real journalist, I savor that.”

His assignment is broad: to fill the dining section every week. He recently covered the opening of Chicago’s first Shake Shack, National Sandwich Day, and new Michelin stars for Chicago’s top restaurants.

“The great thing is we have so much freedom to write about whatever we want,” Pang said. “But sometimes it’s good to have parameters because there’s such a vast food scene here in Chicago. I could write about cheese mongers, wine producers, people who keep honeybees on their decks. But I can’t get around to all of them.” 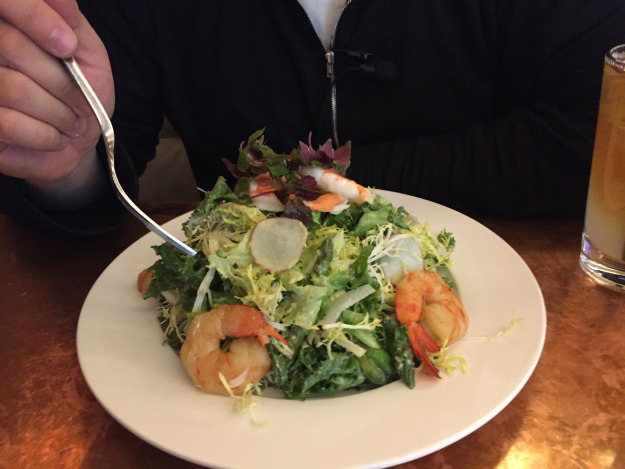 This is Kevin Pang's salad. He doesn't like to be photographed so he can keep a low-profile
when reviewing restaurants. (Photo/Lindsey Nemcek)

Pang says that he tends to write about things that he’s naturally interested in, which happens to be cheap food, barbecue, and Chinese.

He likes writing about food, but he loves a good challenge.

Pang recently premiered a 90-minute documentary about 3-star Michelin Chef Curtis Duffy. “Grace” is the culmination of hundreds of hours spent shadowing the chef to document the creation of his new restaurant. It unknowingly turned into an emotional story about the challenges Duffy overcame, including the murder-suicide of his parents. Pang’s extensive profile of the chef in the Chicago Tribune article, “His Saving Grace,” is a piece of art.

“Right now, food is a lot of fun,” Pang says. “I understand that this is a dream job for a lot of people and it is a great, great job, but it can also be unchallenging because its just going out to restaurants – and that’s great, I’m not complaining. A lot of people would kill for this job. But I like the challenge of doing more involved projects like being able to work on a documentary for three years.”

Since he’s just finished a documentary, Pang hopes to write a book one day.

“It’s about finding outside things that keep you fascinated and curious,” he says. “Having that is really important.”

While most people consider dining out a novelty, Pang has to eat out three to four times a week. He’s been assigned to visit six restaurants in the next two weeks, which he says sounds awesome, but it’s a lot of dining out. He considers cooking at home with his wife a treat.

Pang loves “dude food;” the easy recipes that translate into manly meals, which he admits is often the lazy way out. One of his favorites: sour cream mixed with a ramen noodle soup seasoning packet as chip dip.

“It’s unbelievably good,” Pang says with a smile as he exposes his less sophisticated self. “I don’t want to be a foodie facist.”

To him, it’s never about how food tastes, but he admits that’s a big component of it.

“The least interesting part of eating is the act,” Pang says seriously. “Eating is communal. That’s what I like about food: the cultural act, the social interaction.”

Pang shared this concoction for crispy, cold Kentucky Fried Chicken Salad in Lucky Peach, and he says he heard more feedback on this recipe than anything he’s ever done.