Audio Slideshow: Street musicians Sheldon Harris and  Kevin A. Martin talk
about their experiences playing in the subway. View in full screen

Many people walk by a street musician with a preconceived notion that the performers are homeless or drug addicts with no talent.

Harris performs in the Jackson Red Line subway stop, often playing nineties acoustic rock. He doesn’t make much money, but he said it is better when he travels to Europe to play.

Harris said he does not play for the money. For him, misconceptions are placed aside and people go to play their music just to present it to an audience of commuters, tourists and passersby.

The musician has the chance to connect with his audience on an entirely different level than that of other artists. He sees people’s true emotion throughout the day. 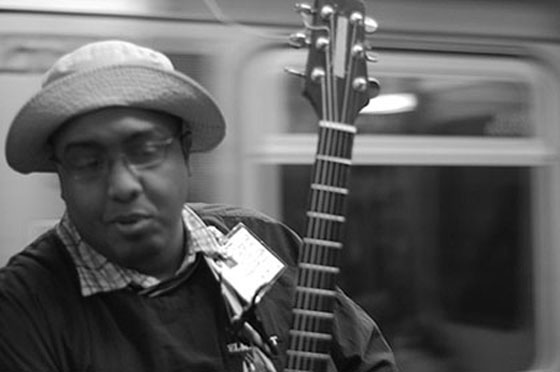 Harris said, “Come into the subway, you will get every human experience in the world, you’ll get the good and the bad and everybody.”

Some take the time to stop, listen and appreciate the music. Others donate some cash. Especially the tourists who come to Chicago.

Kevin A. Martin, who also plays at the Jackson Red Line stop, said the performers are passionate about the music.

Martin plays jazz on his electric guitar and is a new to the subway, finally gaining a street musician license on Oct. 29. Martin is also a licensed electrician and plans to travel to either Iraq or Afghanistan to land contract work.

But Martin's and Harris' ability to share their passion of music comes with some restrictions.

Kevin A. Martin plays jazz on his
electric guitar. (Photo by Forrest Davis)

These $10 permits allow the musician to play in the designated areas for an entire year. Performers are also required to buy a $100 city street musician permit that allows them to play in other areas of the city.

There are only three subway spots for musicians to play throughout the CTA rail system: Red and Blue Line Jackson stops and the Washington Blue Line stop.

Not only are Chicago’s street musicians in competition with each other but they also are competing for their audience’s attention span in a busy commuter city. Creativity counts, from banter with the audience to the choice of songs – are all part of the decisions performers such as Harris and Martin must make to draw an audience.

Harris said he wants commuters to break from their regular schedules, and relax while they wait for their train and listen to the music.