By Clarissa Corrall and Felix LaFortune |

Reflecting on her move from Humboldt Park to Berwyn in 2019, Patricia Prado remembers the bittersweet feeling of having to say goodbye to the neighborhood she lived in for 22 years.

“I miss everything being so close to me,” Prado said. “I miss my neighbors, I miss being able to walk to my favorite store.”

Prado said her relocation was on account of her family outgrowing their home, along with the increase in property taxes due to the ongoing gentrification in the Humboldt Park neighborhood. She lived a short walk away from the 606 Bloomingdale Trail.

“I didn’t have the financial means to do what I needed to do and so because the area was so hot and gentrification was still going on, people want the land,” Prado said. “They didn’t care about my house. It’s all about location.”

According to a 2020 study conducted by DePaul University, prices for one- to four-unit buildings near the 606 have more than quadrupled — more than quadrupling since 2012. The 2.7 mile-long trail and park system opened in 2015 and connects four Chicago neighborhoods: Wicker Park, Bucktown, Humboldt Park and Logan Square.

In an effort to address the pressure of gentrification surrounding the trail, the city council approved a six-month ordinance freeze that began on Feb.1. The ordinance freeze has banned demolition permits along the western portion of the trail, according to an article by The Daily Line.

Mayor Lori Lightfoot rejected the initial ordinance proposal, which called for new construction permits and zoning changes near the trail, in addition to a 12- to 14-month pause for demolitions, according to an article by Curbed Chicago.

Daniel Jacinto Buie, a UIC undergraduate student who has lived in Humboldt Park his entire life, said the 606 has had a positive impact on his community.

“It’s brought a lot of opportunities for us to embrace the park, it makes it more beautiful and attracts more people into our community to come in and just tour our culture,” Jacinto Buie said.

In contrast, Betancur said the 606 is one of the many contributions of the city to enhance gentrification in the Humboldt Park and Logan Square neighborhoods. 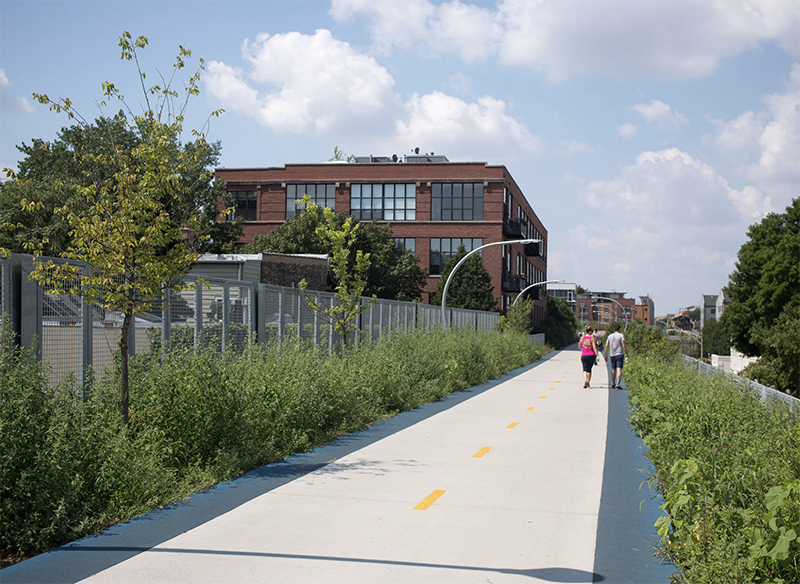 Richard Salinas, a UIC undergraduate student who resides in Logan Square and lived walking distance from the 606, had to move because his family could no longer afford the rent of their apartment.

“They [property owners] were getting more people to move in that were willing to pay those prices, whereas we’re a family of four and a one room apartment for that much that the owner wanted to charge us for; so we just ended up moving farther away,” Salinas said.

In addition to increase in rent and housing prices, Salinas said the 606 trail brought significant change to the Logan Square neighborhood where he has lived in all his life.

“There used to be a lot more family owned businesses, now there are a lot of bars, literally every block is a bar,” Salinas said.

According to Betancur, the flipping and demolition of homes has aided the gentrification in the Logan Square and Humboldt Park neighborhoods, which has led to an increase in property values.

Rent is also slightly higher than the median rent is in Chicago. The median rent price in Logan Square is $1,800, compared to $1,761 for the rest of the city. The website has predicted that this tendency is likely to continue, forecasting an increase of 4.1% in home value over the next year.

Despite the consequences that gentrification has brought on these neighborhoods, both Salinas and Jacinto Buie said it has brought new and attractive opportunities.

In addition to having new opportunities and new businesses, Salinas said that his neighborhood has an increased feeling of safety. He attributed it to gentrification.

“Since gentrification started, it got safer to walk around than when I was younger because I know my parents wouldn’t let me go out much because it was bad,” Salinas said, “and ever since more people started getting pushed out, it’s gotten safer.”

“I look at it in terms of who are the winners and who are the losers, and basically you have the cities as winners because they get more money [and] property taxes,” Betancur said. “So taxpayers that don’t get their share are losers, definitely people that are displaced from their neighborhoods are losers, because they have their lives there, their neighbors, their networks, their support organizations.”

This is the experience that a number of residents have been the victim of. Jacinto Buie said that he would be devastated if he had to move from his neighborhood because of increase in prices as a result of gentrification.

“I would be broken because I grew up here, I took my first steps here,” Jacinto Buie said. “I would be super numb to the fact that I’d have to move and I’m getting kicked out because property values would be raised. This is my home— I’ve never called anywhere else home— it would be life changing.”