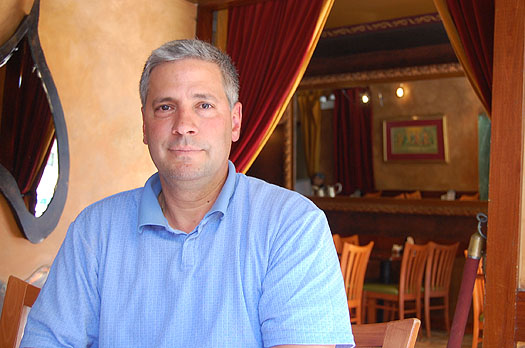 John Harris found himself in charge of O'Hare International Airport on 9/11.
(Photo by Rachel Metea)

John Harris was on his way to the airport when he learned a plane had hit one of the World Trade Center towers.

Harris did not turn around and he did not call his loved ones. Instead, he headed straight for O’Hare International Airport.

At the time of the Sept. 11 attacks, Harris, who later served as the chief of staff to former Illinois Gov. Rod Blagojevich and resigned with him in 2008, was Chicago's first deputy aviation commissioner.

With many of the top airport executives stranded at a conference in Montreal that day, Harris was left to run one of the busiest airports in a country under attack by hijacked airliners.

“It was the first time in U.S. history that all airports closed,” Harris said. “Airports from time-to-time close for security reasons or for mechanical failure, but never had the whole system shut down.

“It was somewhat eerie to look up in the sky and not see any planes or any contrails in the air … very quiet. An eerie quiet.”

By the time Harris arrived at O’Hare 30 minutes after the first attack, a second plane had struck a second World Trade Center tower. Using a desktop application called Flight Tracker, Harris was able to monitor all of the flights inbound and outbound from Chicago airports.

“According to the Federal Aviation Administration (FAA), I was told there was one more hijacked plane unaccounted for,” he said.

By this time, a third plane -- American Flight 77 out of Washington Dulles International Airport headed to Los Angeles-- had crashed into the Pentagon. The fourth plane was United 93.

“United [93] was over Ohio and headed toward Chicago,” he said.

Harris was in touch with Mayor Daley's office informing the staff that the plane was still headed toward Illinois. With the flight out of contact with the FAA, it was assumed to have been hijacked, he said. The Sears Tower and the central Loop business district were ordered to be evacuated.

Minutes later, the plane turned east and, after eventually falling off the radar, was presumed to be down.

After Harris was notified that the plane had crashed in rural Pennsylvania, Harris said he kept thinking about whether or not there was a continuing threat and if all of the hijacked planes had been accounted for. With many thousands of planes in the sky at any one time and dozens landing in any given minute … how do would officials know if one is missing?

“It was stressful,” Harris said. “But everyone performed in a calm and deliberate manner.”

All four hijackings occurred before 10 a.m., at the height of the morning arrival bank, which Harris descibed as "the morning rush hour for airports."

“It was an extraordinary situation,” he said. We were used to dealing with snowstorms or bomb threats, “but a hijacking had been very rare and within a couple hours we were aware of four.”

After the FAA ordered all planes to be grounded, the threat of an additional attack surfaced as one more issue in a sea of many. O’Hare is one of the largest airports in the nation, with long runways that can accommodate any jet aircraft at any time. Consequently, many of the international flights anywhere near Chicago -- including Canada and the Midwest region, were diverted to O’Hare.

At 9 a.m. on a Tuesday, O’Hare typically executes as a high-tempo operation, and on a few minutes notice, a large number of aircraft across a wide region suddenly banked and pointed their noses straight at it.

“We worked closely with the FAA to bring down as many planes as we could and get the people out of the airport as quickly as possible, not knowing whether more attacks were coming,” Harris said, “whether maybe by land, sea or air.”

According to Harris, there was “not much panic” among travelers.

“Most people weren’t fully aware of what was going on,” he said, “they were just told to leave the airport.”

Harris attributed this to the era's now-archaic flow of communication.

“The Internet was not as widespread as it is today,” he said. “Media wasn’t as accessible. People were gathered around televisions in the terminals or in the hold rooms. People reacted rather calmly.

“Within a few hours, the airport was like a ghost town.”

If the attacks were to happen today, Harris said he believes it would be much more difficult to safely evacuate the terminals. With the spread of news through social media and other Web tools, Harris said, “I think there would be more panic.”

In the weeks following the attacks, a debate in Washington, D.C. led to the creation of the Transportation Security Administration (TSA). Prior to 9/11, security passenger screening was done by the airlines. According to Harris, many people thought this led to a competing interest between security and efficiency.

“Some people question how effective minimum wage security screeners working for private contractors under contract with the airlines can be,” Harris said.

Consequently, TSA put this task in the hands of the federal workforce.

People were very willing to deal with the slower security screening, Harris said. He said he that witnessed that patience among passengers until he left the aviation industry in 2004.

“It was only after several years did people’s patience begin to wear,” he said. “As time passed, it’s natural that people demand faster, more efficient and less intrusive ways” when dealing with security.

“I think people say that after all these years, we should figure out a way to build a better mousetrap,"

There is a lot of debate about selective screening at airports, he said.

“Back then, everybody was willing to accept everybody being screened,” he said. “The more people learned about who carried out the attacks and what the motivation was, they naturally asked, ‘Why can’t we target the threat instead of screening everybody?’ ”

Harris said the threat isn’t “that easy to put a face on.” History has shown, he said, that terrorists “come in all shapes and colors.”

“The world changed that day and it’s never going back,” he said. “It’s a new reality, it’s here to stay and hopefully it won’t be tested again.”