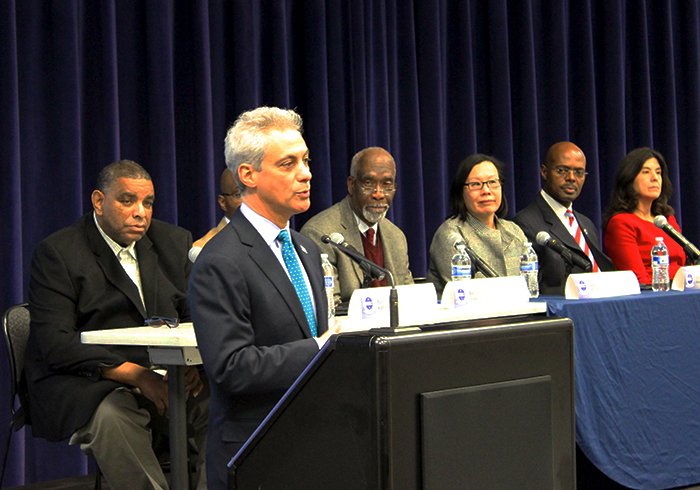 At a nearly packed town hall meeting on Friday, Mayor Rahm Emanuel, Police Supt. Garry McCarthy and a panel of community leaders and officials discussed solutions for reducing gun violence in Chicago -- with a focus on youth.

Mayor Emanuel opened the meeting with nod to a separate meeting being held simultaneously in the next room for youths affected by gun violence.

“Everything we’re doing in this room is only as relevant as the kids in that room; that they know they’re front and center with us,” he said. “I want them to have a positive thought that they have a future.”

The city is working to put more police on the streets, quantitatively and strategically, and get more kids, guns and drugs off the streets, Emanuel said.

Preventative measures are critical, he said, using the example of his own push to tighten curfew laws and empower police to enforce those laws.

“Our attendance is up and our infractions are down because we’re learning how to deescalate situations so that kids can focus on classwork,” Chou said.

The mayor said the city is making notable progress reducing gun violence, with overall shootings down 25 percent and youth shootings down 40 percent.

He urged utilizing a more “comprehensive strategy” to get at the roots of the problem. Policing is important, but parenting, schools, after school programming and tougher gun laws are equally important parts of the equation, he said.

In addition to universal background checks and mandatory minimum sentencing for illegal firearm possession, he proposed a ban on assault rifles and extended magazines. He also stressed a need for legislation requiring gun owners to report the loss, theft or transfer of firearms in Illinois.

Everybody wants to skirt around this issue, particularly down in Springfield. But the bottom line in a gun case is a year sentence, which amounts to only six months time served or less.

All five of these measures are already law in New York State, he added.

“Mandatory minimums are a little bit controversial, especially in the African American community, but it’s something we need to talk about,” McCarthy said.

McCarthy pointed to New York, where “draconian” drug laws were repealed, alleviating pressure on the system, and penalties for illegal gun possession were increased to three-year mandatory minimum sentences. As a result, gun crimes, homicides, gun seizures and incarceration are all going down in New York, he said.

“I know what I’m talking about is something outside the scope of policing,” McCarthy said, “but this is a failed system when there’s too many guns coming in and not enough punishment coming out.”

“Everybody wants to skirt around this issue, particularly down in Springfield. But the bottom line in a gun case is a year sentence, which amounts to only six months time served or less.” Alvarez said. “So we see these guys on the streets arrested for illegal gun possession, they do four months and they’re out. And what do they do? They possess more guns. And you see this over and over again.”

At the tail end of the nearly two-hour long panel discussion, moderators Robin Robinson and Vance T. Henry opened the floor up for a couple questions from the audience. Rather than an open question and answer session, audience members were instructed to write their questions on provided flash cards that moderators read aloud to panelists.

There was only time for a few questions and some audience members were vocally dissatisfied with the evening’s course of discussion.

Henry closed the event by asking the crowd if this time had been time well served.

The overwhelming response that resounded from the audience was “No.”