In November 2011, a man’s body lay in an alleyway in West Woodlawn with gunshot wounds to the head and torso. A passerby walking his dog spotted it and called 911. The police responded to the scene in the 6200 block of South Eberhart Avenue and later identified the body as 17-year-old Carlton Archer.

Less than a week later, Archer's funeral was held at New Beginnings Church on South Martin Luther King Drive. As friends and loved ones gathered at the church, gunfire from rival gang members erupted outside.

At that point, New Beginnings Pastor Corey Brooks had seen enough. Archer's was the 10th funeral he had officiated over in less than a year, all for black males under the age of 25.

A few days later, Brooks rode a construction lift to the roof of an abandoned, crime-infested two-story motel across the street from the church in an effort to raise the funds for its demolition as well as to protest the violent trend that was tearing his neighborhood apart.

“I think it's all of our responsibility,” Brooks said. “It's up to all of us politicians, pastor, preachers, police, teachers to try to collaborate and make sure that we fix the problem.”

The motel has since been torn down, and last summer, Brooks walked from New York to Los Angeles, collecting donations along the way, to build a community center on the motel's former site.

But even with efforts from Brooks and other community leaders, there are more and more victims like Archer, young black men, dying from gunfire.

Last year, Chicago’s murder rate was four times that of New York City and twice that of Los Angeles. Since 2001, more than 2,000 U.S. citizens – soliders, contractors and others -- have been killed in Afghanistan and more than 5,000 in Chicago.

In 2012, 433 people were killed by a firearm in Chicago, 65 of whom were under 18. January 2013 was Chicago’s deadliest month in more than a decade. And, according to Chicago crime statistics, 75 percent of Chicago’s gun-death victims in 2012 were African-American or Latino.

The city's escalating violence has politicians on the national, state and local levels scurrying for solutions.

On Jan. 16, under the shadow of the massacre in Newtown, Conn., President Obama put forth a 23-point proposal in an initiative to increase restrictions on the sale and possession of firearms.

A day later, Mayor Rahm Emanuel introduced proposed ordinances to the City Council that would increase penalties for weapons and ammunition violations.

The long wait in the judicial process does little to help protect victims of gun violence immediately, and so Madigan and other Illinois officials are left with the task of putting legislation in place that can help curb the violence that is spreading through many of Chicago’s communities.

Yet, in many of Chicago's poorest neighborhoods, where guns are omnipresent, action by elected officials can only go so far.

A History of Violence: Chaotic Turn
Byron Nelson, 59, works out in the gym at New Beginnings Church. He is a former member of the Black P Stones gang, and has witnessed firsthand the way in which violence and gangs have evolved on the South Side over the decades.

“Back in my day, it was nothing like this,” he said. “You wouldn't even think about doing the stuff that they're doing. This is chaos out here.”

Nelson, who moved into the Cabrini Green housing project with his family when he was 2, said that tearing down the housing projects did not help reduce the city's crime, but only made it harder to combat.

“They let the animals out of the zoo and locked up all the leaders,” he said.

The leaders that Nelson references are those of the gangs that once controlled vast portions of the city. Over the past 20 years, the Chicago Police Department has been so effective in incarcerating many of the city's gang leaders that it has transformed the gangs into “cliques,”  small groups that occupy small, two or three-block stretches. If someone walks along a street corner or even plays basketball with a neighbor, then they are automatically affiliated with a clique and therefore become a target of rival cliques.

When Nelson was growing up, it was an honor to be in a gang.

“Back in the day when I was a Stone it was a privilege to be a Stone,” he said. “You had to be asked to be one.”

Today, there is no initiation, but is simply an element of the geography. Many cliques do not even sell drugs, and many of the shootings begin with petty incidents. It has reached a point where it is nearly impossible to be neutral, Nelson said.

“You can be neutral but you can't try to stand out at the same time,” he said. “You can't hang out on the corner and be neutral. You are either with these people or you're not. You can't just be with somebody when it's convenient.”

The breakdown in gang hierarchy has left crime unorganized, unchecked and without leadership.

“We used to have laws in the street,” Nelson said. “You had consequences when you took matters into your own hands without talking to somebody first.”

Now, cliques lack the leadership that imposed such consequences, which gives way to young men picking up firearms without proper foresight.

“Youth violence is very impulsive,” said Harold Pollack, co-director of the University of Chicago Crime Lab, during a conference at East-West University in February.

The impulsive nature of youth violence is connected to truancy and dropout rates, said Rachel Johnston, director of the Youth Shooting Review at the University of Chicago. In many of the city's poorest neighborhoods there is a clear connection between high school drop out rates and violent crime.

For black males in Chicago, the high school graduation rate is just 39 percent, a rate that has remained flat for the past 40 years, according to the Crime Lab.

“Theoretically, the more pro-social attachments an individual has, the less likely they are to engage in criminal activity,” Johnston said. “A lot of times you see that the [murder] victim and the offender are not attached to school.” 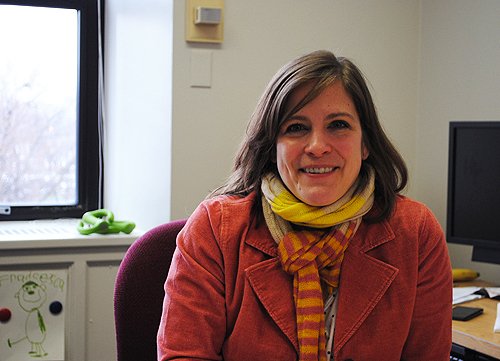 Rachel Johnston is the director of the Chicago Youth Shooting Review.
(Photo/Clayton Guse)

With under-performing schools, sweeping school closings, budget cuts among other measures, it can be difficult for communities to foster those pro-social attachments.

“In the neighborhood I’m in, there’s 30 percent unemployment,” said the Rev. Michael Pfleger in a Huffington Post online interview. “There are more guns than computers.”

A Clear Turnaround
Fenger High School officials in Roseland have made a concentrated effort to endorse pro-social attachments and keep students on a path toward graduation.

In 2009, the school attracted national attention for a brawl that left Derrion Albert, 16, dead. Since then, Fenger has experienced a tremendous turnaround in both incident and dropout rates, which can be largely attributed to the work done by the school's Peer Jury program.

In the program, student mentors meet with other students after an incident or altercation and attempt to resolve whatever conflict that was taking place. Here, the Peer Jury members are held in the same regard as athletes.

“Peace is infectious just as violence is infectious,” said Robert Spicer, the Culture and Climate Specialist at Fenger who runs the Peer Jury program. “When you have a whole community of young people whose needs are not being met, you have a powder keg.”

Latriana, a Fenger student and a Peer Jury member, said that “every act of violence has a reason behind it. Sometimes that reason is that kids and adults need someone to talk to.” 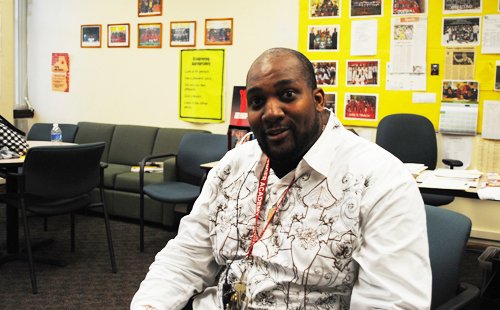 One thing that Johnston, Spicer, Nelson and others alike made clear is that there is no single solution to the plague of violence that blankets the city.

“This is not just a gun issue,” said President Obama in an address at Hyde Park Academy on Feb. 15. “It is also an issue of the kinds of communities that we are building and for that we all share responsibility as citizens to fix it.”

Building the kinds of communities that Obama speaks about has become an increasingly difficult task for many of Chicago’s leaders. The money is not there.

After spending four months last summer walking between New York and Los Angeles, Brooks is still a long way away from being able to build his community center. In the meantime, he has resorted to hosting classes and programs at New Beginnings Church.

One program that Brooks and others at New Beginnings Church are working on is “Project Choices,” which mentors young girls and boys on the weekends, and boys in the Cook County Court system during the week. This program is one of 12 programs being launched out of the church.

“We have to figure out a way to educate young people and provide them with more opportunities,” Brooks said. “Ultimately if they’re not provided people will slide back into what they came out of.”