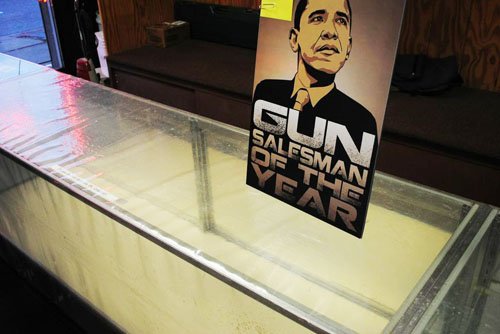 One of many empty cases that line the inside of Illinois Gun Works.
The Barack Obama salesman posters  sold for $6. (Photo/Scott Sutton)

Customers who first walk in to Illinois Gun Works in Elmwood Park may be surprised by what they see -- or don’t see.

The gun shop is just blocks outside of Chicago, a city that has outlawed gun shops and gun shows. It does not have any AK-47s hanging on racks, AR-15s or other intimidating weapons within arm’s reach.

In fact, there are only seven guns on display – two rifles and five hand guns – which may seem odd for one of the area’s largest gun stores.

The air is filled with the pop, pop, pop of gun enthusiasts shooting targets on the range in back, but the glass cases that line the storefront are barren.

But the store’s owner, Don Mastrianni, 58, is anything but worried. For him, the empty cases mean one thing and one thing only: Business is good, very good.

Along with the rest of the nation’s gun suppliers, Mastrianni has seen a huge increase in sales since President Barack Obama announced his proposed 23-point plan this past January to put restrictions on weapons and stem gun violence in the wake of the Newtown massacre. Although Mastrianni orders from five different national suppliers, orders are so backlogged right now that keeping a full inventory is nearly impossible.

“Everything in here was full at one point,” Mastrianni said. “If they wanted to control guns that was the worst way to do it. Everyone went out and bought everything they could. We’re out of ammunition, out of guns. “

Although it is difficult to determine the exact number of firearms sold recently, one statistic serves as a telltale sign that sales in Illinois are especially high.

With each application to buy a firearm in Illinois, a background check through the FBI’s National Instant Criminal Back Ground Check System (NICS) is processed. The FBI reported 149,608 background checks processed through the NICS in January 2013 for Illinois. That was the third highest in the nation, with Texas coming in second and Kentucky leading the way at 238,510.

The heated national debate over guns hasn’t been all about the weapons that are being bought legally through Federal Firearms Licensees, like gun shops. Much of the attention has centered on the so-called gun show loopholes and illegal weapons.

“Forty percent of weapons are bought outside of the system that requires background checks,” said Harold Pollack, co-director of the University of Chicago’s Crime Lab.

Although the amount of background checks processed through the NICS may seem staggering, it is not a clear indicator of the true volume of weapons being sold, sources say. That is where the gun show loophole comes in.

The Gun Show Loophole
Earlier this year the Chicago Tribune reported that Chicagoans Levaine Tanksley and David Lewisbey had been federally indicted on charges of selling 43 weapons in 26 hours to a government informant.

The weapons, before being illegally sold to the informant, had been purchased legally with cash 40 miles from Chicago in Indiana, where a private dealer at a gun show only needs to see an Indiana state ID to sell a weapon. No background check required.

Had there been a background check, it would have revealed that Tanksley had served seven years in prison on drug charges and Lewisbey had been convicted of using a fake credit card.

“We need universal background checks at gun shows,” said Jeff Shaman, a professor of constitutional law at DePaul University. “It’s as simple as that.”

Background checks have been recognized as one of the primary lines of defense in the battle to keep weapons out of the wrong hands. In fact, Obama’s gun control proposal contains five points that pertain to the subject of background checks. This includes a provision that would make universal background checks mandatory for all firearms sales, including those through a private dealer.

The thought is that with proper background checks the authorities will be able to prevent straw-buyers – people like Tanksley and Lewisbey who purchase guns legally and give them to someone illegally – from helping to fuel gun violence, especially with gangs.

“Gang members or their affiliates don’t just come in here to buy a gun and say, ‘Gee, I belong to so-and-so gang,’” he said. “They send in someone who checks out, who is perfectly legal and I’m sure they would do the same at a gun show.”

A well regulated Militia, being necessary to the security of a free State, the right of the people to keep and bear Arms, shall not be infringed. -- The Second Amendment

The national debate is underscored by the legality of Obama’s proposal. Pro Second Amendment groups such as the National Rifle Association strongly oppose the restrictions in the proposal on the grounds that they violate their constitutional rights to bear arms.

“Most of what’s in there is only going to affect law-abiding citizens,” said Richard Pearson, who has been the executive director of the Illinois State Rifle Association since 2004. “I mean AR-15s are rarely used in a crime, hammers are used in more crimes.”

However, an unprecedented number of Americans have shown support for the proposed restrictions. According to an Associated Press and GFK poll released on Jan. 16, 84 percent of adults would like to see the federal government step in and create a standard for background checks at gun shows.

“People who make the assertion that these proposals are unconstitutional are clearly unfamiliar with supreme court rulings on the matter,” said Shaman, referring to McDonald v Chicago. In the 2010 case, the U.S. Supreme Court ruled that the right to bear arms applies to state’s rights and, most notably, that the Second Amendment allows for restrictions and the right to bear arms is not unlimited.

But while the gun debate rages on a national scale, Chicago is racing toward a new era of gun laws. This era, in a sense of irony, will allow more guns.

Illinois, Chicago Gun Laws
Illinois’s history, specifically Chicago’s, is steeped in gun violence dating back to the gangsters of the prohibition when horror shows like the St. Valentine’s Day Massacre painted the town red and Tommy guns were the brush.

Illinois currently has some of the nation’s toughest gun laws in place, yet Chicago, a city that does not allow gun shows or gun shops within its limits, has the highest murder rate of any U.S. city by far. According to the University of Chicago crime lab, between 2006 and 2010, there were 2,210 people killed by a firearm and 12,000 more were assaulted by a gun.

Juxtapose that with the 2,770 active duty U.S. military servicemen who were killed by hostiles during the same period of time, according to statistics from the Defense Casualty Analysis System.

Illinois is on a collision course with a key date -- June 9, 2013 -- the last day lawmakers have to put legislation in place for concealed weapons. After the Dec. 11, 2012 verdict that overturned the long standing ban on concealed weapons – the only one like it in the nation – Illinois legislators were given 180 days to prepare to allow its citizens carry concealed handguns in public.

Effecting Change
While changes are taking place through legislation high on Capitol Hill, others are calling for social change to combat gun violence on the ground level.

At a recent seminar, Roseanna Ander, director of the University of Chicago Crime Lab, and Pollack said that the best way to stop gun violence in Chicago, and around the nation, is to start with youth education. They noted that Chicago children between the ages of five to 14 suffer from a 17 times higher rate of gun homicides.

“We need to emphasize a change in culture and how we view guns,” Pollack said. “We need to spend money on developing social cognitive skills relating to this.”

Even Mastrianni, a gun shop owner for 11 years, agreed that a change in how society views guns is needed.

“All firearms are inherently dangerous,” Mastrianni said. “But it’s more about the mentality that people are willing to kill each other over a loaf of bread or a dollar bill or bag of dope.”

President Obama has also acknowledged the need for a social change, adding that one of the executive actions he would take as part of his proposal would be to initiate a national conversation about safe and responsible gun ownership.

Pearson, however, says it’s less about the social aspect and more about enforcing the laws that already exist.

“We can’t make a person learn about gun safety,” Pearson said. “We need to prosecute people who violate laws. Throw the book at them. In fact, drop the book on them.”

But whether it is legislation, enforcement or education that will stop gun violence is unclear.

“There will never be a vaccine to violence,” Pollack said. “We need a portfolio of interventions.”