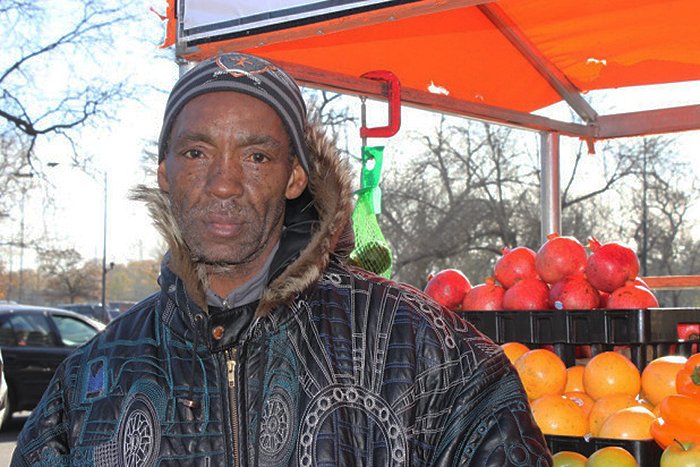 Neighbor Carts is a collaboration between Neighbor Capital, a social enterprise aiming to empower communities with sustainable solutions, and StreetWise, a local street publication sold by at-risk Chicagoans.

While the initiative has moved beyond vendors selling magazines, the program’s core aim remains the same — helping homeless, unemployed and other at-risk Chicagoans achieve personal stability.

Darryl Williams is one of the 14 street vendors selected and trained to spearhead Neighbor Carts. After battling with a drug addiction, he found himself homeless and without a viable source of income. Now, the 53-year-old Chicago native has turned his life around, finding success as a street vendor.

“Coming up, I guess I went the wrong track and started using drugs,” Williams said. “When I went to Safe Haven, I got myself cleaned up.”

Williams has been drug-free for 18 months as of Nov. 1. He said being involved with Neighbor Carts changed his life and helped him start going in the right direction.

“It’s great," he said. "It’s keeping money in my pocket. I don’t have to ask nobody for nothing, and also I got my own apartment now.”

A tidy array of oranges, bananas, plums, strawberries and grapes line the stainless steel cart sitting on the southeast corner of Chicago Avenue and State Street. Here, an orange costs $1.

Williams said his affordable prices, ripe bananas and various fruit packs attract most of his customers near the Red Line’s Chicago stop.

“Jewel and Dominick’s they sell it, but the price I sell it for people can afford to buy it,” Williams said. “My hot sellers are my bananas and my fruit packs.”

A customer checking out the fruit on Williams’ fruit cart. (Photo/Gabriel Charles Tyler)

The Neighbor Carts business model allows the fruit vendors in the program to control their prices and keep 100 percent of their earnings. The fruit, supplied by the Chicago International Produce Market, is brought to the vendors at each location around 6 a.m., the beginning of their day.

Williams wakes up every morning at 3 a.m. to prepare for his day. He said there are times where he is tired, but he still loves what he does.

“[It's hard] standing out here all day on your feet,” Williams said. “Sometimes I’m up hollerin’, ‘Fruit. Fruit packs.,’ all day for nine hours. That’s a lot.”

Like Williams, John Piercy, President and Founder of Neighbor Carts, is invested in his work and combating Chicago’s social issues. The fourth-generation retailer said working with clearing companies downtown exposed him to the extreme degrees of poverty plaguing the city’s South and West Sides.

“I became aware of the social challenges,” Piercy said. “I left the Chicago Mercantile Exchange industry to work for a non-profit that addressed a lot of the issues surrounding poverty. I ran the operations.”

Although Piercy began working to combat the issues surrounding poverty in Chicago, he said it was not enough. He wanted to do more.

“I bought a flat in Humboldt Park. I wanted my work to be connected to addressing poverty. My daily life wasn’t just about providing affordable housing, but also living there and dealing with the challenges,” Piercy said. “That kind of became a defining shift for me because clearly the problems that exist and the challenges that exist are overwhelming.”

Piercy said experiencing the effects of living in an impoverished community led him to start Neighbor Carts in 2009. The goal was two-fold — addressing the lack of quality food and good business retail, and providing the nutritional needs of citizens in these neighborhoods.

An amended city ordinance granted an unlimited number of licenses for movable outdoor fruit stands, opening the door for Neighbor Carts to emerge last June. A little over a year after its inception, Neighbor Carts has 14 locations throughout the city in high foot-traffic locales and under-resourced neighborhoods. Fifty percent of the fruit carts are in food deserts, areas where the access to healthy foods is limited, as a condition of the city ordinance regarding fruit carts.

As Chicago’s weather grows colder and more unpredictable, the number of fruit carts operating decreases. In the month of November, 12 fruit carts are operating, but that number will drop to four or five carts in December, according to Piercy.

“The prime season for fresh produce retail outdoors is March through December. Next year, we want to have 25 to 30 neighbor carts and build those carts’ profitability,” Piercy said.

“The fruit carts that we see around various neighborhoods in the city are a very convenient way to grab fresh fruit and produce,” Bowser said. “More importantly, they put the idea of eating something fresh and healthy in our heads when we are on the go, reminding us that there are healthy snack options besides chips, candy and chicken nuggets.”

Fruit carts in metropolitan cities are not exactly a new concept — fruit carts were wildly popular in the 1800s and the first half of the 20th century. Vendors sold from carts in New York City and Chicago up until the ’60s.

“Chicago’s not a city with a rich history in sidewalk sells like New York or Boston,” Schwieterman said. “We used to have those downtown, and I would love that. I don’t see those anymore.”

Farmer’s markets have popped up in many food deserts, but their days and hours of operation are very limited. Schwieterman said he believes that fruit carts could definitely fill that void.

“With convenience stores, let’s face it, fruit, especially fresh fruit, is just an absent product,” Schwieterman said. ”[Having fruit carts in food deserts] is more realistic than thinking we could put a big grocery stores in those areas.”

The display of fruit on William’s cart. (Photo/Gabriel Charles Tyler)

The number of Chicago food deserts dropped by 21 percent — from 100,159 in June of 2011 to 79,434 on Aug. 16 — over the past two years, according to a two-year progress report by the mayor’s office. However, citizens are facing a number of food-related issues, including the recent federal cuts in the food stamps program. Therefore, any solution to curbing Chicago’s food problems must be centered in the city’s communities.

“In addition to making fresh fruit available, [fruit carts] puts [them] front and center in neighborhood life, and that’s invaluable. Having people walk by fresh fruit everyday entices them to give it a try,” Schwieterman said.

Schwieterman said he believes that fruit carts are the most feasible solution for eradicating Chicago’s food deserts and other food-related issues afflicting citizens.

“Having food carts in food deserts is a win-win situation. When you buy fresh fruit from outside, you feel like you’re engaged with the neighborhood.”

Williams said providing Chicagoans with healthy food is very important to him, and he hopes to continue selling fruit to people permanently.

“In the next five years, I hope to have my own business. I wouldn’t mind doing this right here because it’s a good thing to do, plus you’re feeding people healthy food,” Williams said.

Interactive Map: Find a Neighbor Cart in your community.

Audio Slideshow: A day in the life of Neighbor Carts vendor Darryl Williams. Watch the slideshow below or in full browser.