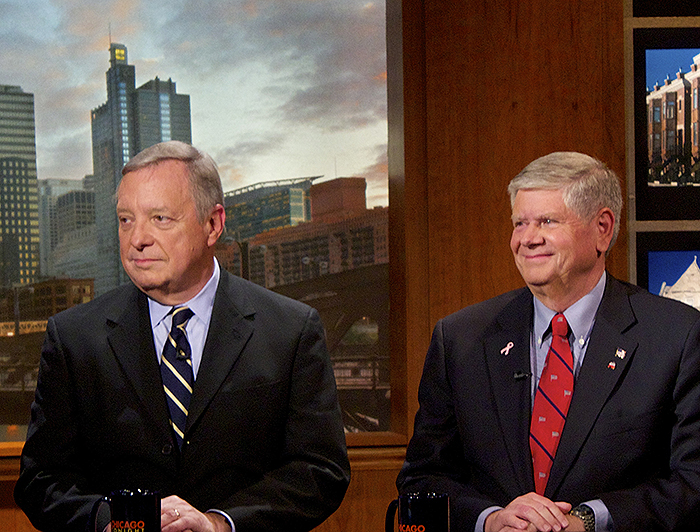 The rapid-fire forum covered a lot of ground and started off with the question of Ebola travel bans.

Sticking to party lines, Durbin opposed the ban and Oberweis supported it. Both men said they favored precautionary measures for people who have traveled to Ebola affected countries in West Africa.

Tensions flared around the topic of minimum wage. Oberweis said he supported raising minimum wage to $10 for people “over a certain age.” He slammed Durbin’s plan as a job killer and said his plan would help “younger, entry-level workers who are starting in the employment area” find jobs.

Durbin fired back and said Oberweis’ plan to raise minimum wages for people only 26 or older “defied common sense.” Durbin, who is a co-sponsor of the Minimum Wage Fairness Act that would increase hourly minimum wages to $10.10, criticized Oberweis’ plan for discriminating against a large segment of younger voters.

On health care, Oberweis criticized Obamacare for not “working 100 percent.” He said the plan was too costly for taxpayers and called to reduce overall health care costs.

Moving to the topic of NFL concussions, the candidates were asked what government could do to increase player safety.

“It’s not something I spend a lot of time thinking about, but it is an important issue,” Oberweis said.

When questioned how the government could reduce gun-violence, Oberweis fell back on an economic approach. He blamed failed policy and insufficient job opportunities for driving gun-violence in low-income communities.

Durbin accused Oberweis of “dodging” the question because he doesn’t support common-sense gun control measures such as a ban on assault weapons.

Durbin refuted Oberweis’ claims of failed economic policy at the hands of congressional Democrats. He held up his own job-growth record and said he worked hard to keep big businesses in America.

Oberweis likened his opponent’s job growth tactics to “bullying” and said the right thing to do is simplify the tax code to make America more business friendly.

Durbin, who has served in the U.S. Senate since 1997 and seeks a fourth term this election cycle, said that’s a decision best left to voters.