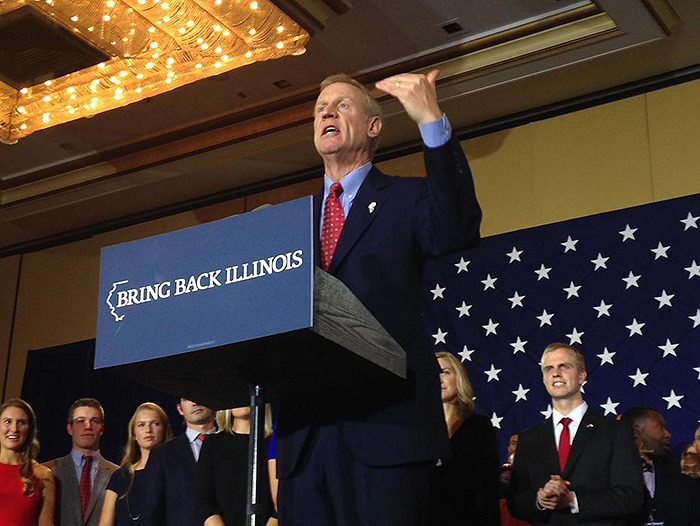 Analysis: The Good, the Bad and the Ugly of the Rauner Party

The Illinois governor’s race results weren’t called until nearly midnight, but two things were clear right away on Tuesday night -- there would be no free drinks and no free Wi-Fi access at Bruce Rauner’s election-night party.

There was fair warning about the Wi-Fi issue, but still -- it’s 2014, people. Some reporters shelled out $50 for the Chicago Hilton’s Wi-Fi access. Others made do using iPhones as personal hotspot. There were some reports of all Internet access going down for a few moments around 9:30 p.m., but it recovered shortly thereafter.

People might assume a billionaire who ponied up millions for his gubernatorial campaign would foot the bar tab at his election-night party. They would be wrong. It was a cash bar. Cocktails and wine went for $10 a pop and soda for $5.

The night’s theme seemed to be about a businessman with a plan to “shake up Springfield.” Enthusiasm toward Rauner’s business know-how was a common sentiment among partygoers Tuesday evening.

One Rauner supporter at the party, Kayla Hoppla, said she thinks Rauner has the chops to create a better environment for Illinois’ small businesses.

“We need someone to support the people there instead of highing up the taxes, because that doesn't work with middle class,” said Hoppla, whose family owns a business. “He will take action with his win.”

Partygoer and Rauner supporter Nick Bart Smith emigrated here just four years ago from England. He said he admires Rauner’s business success and thinks the soon-to-be governor will do a better job creating opportunities for people than his predecessor did.

“Bruce really personifies the American dream for me and he is someone who has achieved a great deal,” Smith said. “I feel he shares the aspirations of a lot of people who do well for their families, have good schools, balance budgets -- To me, that’s what America is.”

Partygoer John Kettman stood out from the crowd of people wearing Rauner T-shirts and toting Rauner signs. He opted instead to bring a poster-sized framed illustration of Bruce and Diana Rauner to the party. Kettman said he made it as a gift for Rauner.

Then he distributed business cards and photocopies of some other examples of his political caricatures and portraits. He also does life-sized cutouts, private parties and school functions, in case you were wondering.

As expected, it was a long night. Press were mostly set up by 6 p.m., and attendees started rolling in around 7 p.m.. The Hilton ballroom filled up by 10 p.m. or so. By 10:30 p.m., the room was  packed and the crowd began gathering around the stage, waiting for Rauner and Sanguinetti to arrive.

Winners were called just past 11 p.m., and soon-to-be Lt. Gov. Evelyn Sanguinetti took to the stage. During her victory speech, she proudly announced that she would be the first Latina lieutenant governor in Illinois and called Tuesday’s win a win for all women and for all people of color.

It was nearly 11:30 p.m. when Rauner arrived and made his victory speech. He kept it short and largely boilerplate, thanking his supporters and family.