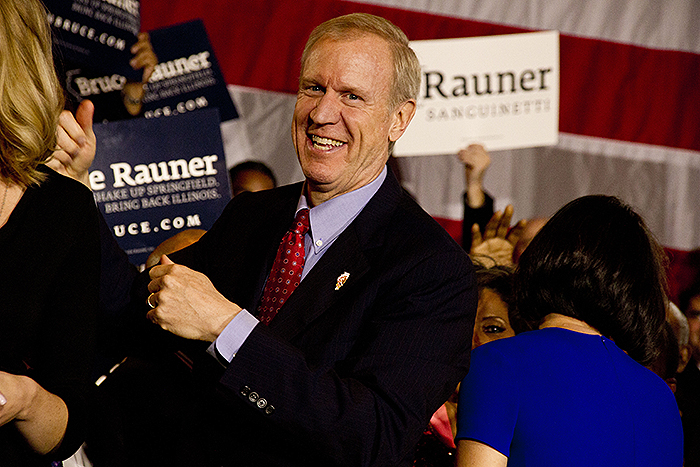 Bruce Rauner is all smiles as he makes his way to the podium. (Photo/Roxane Pahldad)

By Marc Filippino and Roxane Pahldad

Bruce Rauner took to the podium early Wednesday morning to address a restless crowd and claim his title as Illinois’s next governor.

He took the win and dedicated to the people, even though his opponent, incumbent Pat Quinn, refused to concede the race.

"This victory is for our students, our children who deserve to have the best education in American. And this a victory for our citizens who deserve a government without corruption by putting term limits on our elected officials.”

Rauner held a commanding 168,000-vote lead with 45,000 votes left to be counted late Tuesday night, but Quinn refused to concede the race. He said he would wait one to three days until "every vote was counted." Some voters around the city were waiting until after 1 a.m. to vote after polls extended hours.

Rauner’s supporters at The Chicago Hilton got louder as the separation between he and Quinn grew. But they had to wait roughly an hour after most of the major news outlets called the election for Rauner’s acceptance speech while Quinn pondered what to do.

Many who attended at Rauner’s campaign party painted Rauner, a 57-year-old investment firm founder, as a beacon of hope for Illinois.

“I think Pat Quinn has really failed Illinois several times,” said Michael Anthony Richardson, the chief of staff of the 6th Ward Republican Organization. “[Rauner’s] been successful with his businesses. He knows how to bring businesses out of debt and that’s what Illinois needs.”

Rauner’s business savvy and wealth have come under fire in the months leading up to the election. In a midterm year where candidates nationally spent a record breaking $4 billion on campaigns, Rauner funded $26 million of his own money to a $66-million campaign. Quinn raised roughly $30 million.

But his wealth doesn’t deter his loyal followers.

“Bruce has money and people like to slander him because he has money,” said Rauner’s entertainment liaison, John Hill. “But he’s built his money through hard work and dedication.” 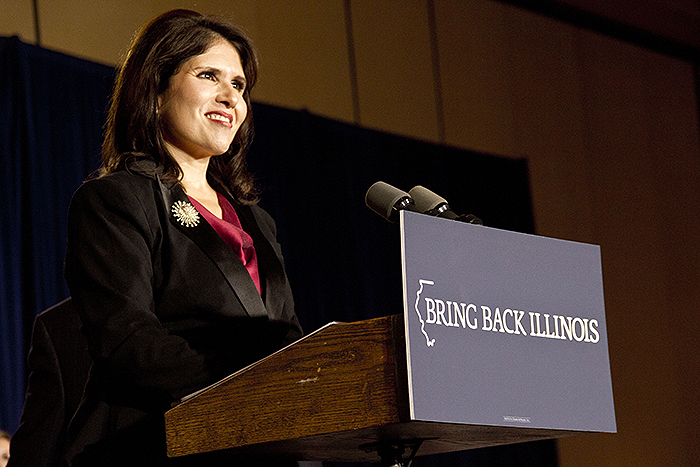 Many Rauner supporters weren’t just supportive of Rauner’s political aspirations; they were ready to see a Democrat out of office.

“I thought it was a good opportunity, and to be a honest, it’s been a long time since a Republican has been in office in Chicago,” said Rauner campaign volunteer Jack Ovington. “I think it’s time. I don’t think Pat Quinn has done his job very well and that the Democrats have done very well.“

Others found the issue to be nonpartisan. Among the well-dressed, upper-class supporters that filled The Conrad Continental Room in the Hilton, Tom Westhoff and his wife Sue, stood in modest clothes watching the crowd.

The Westhoff’s have spent the better part of seven decades living in Elmhurst and made the trek to Chicago to see the election night in action. They feel that regardless of his party lines, Rauner was the best candidate. And though they think having Rauner in office is a gamble, he’s a bet worth taking.

“The state is broke, maybe a businessman can turn this around,” Tom said. “Who knows? We’re taking a chance voting for him, lets face it. We know what we don’t like. We don’t like Pat Quinn’s policies. So let’s try something different. If it doesn’t work, we’ll try something else in four years.”