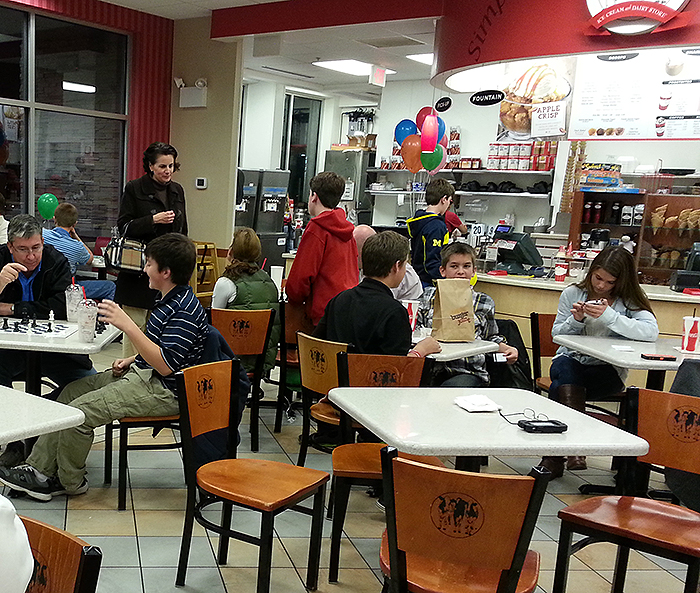 Notebook: Oberweis Party a Family Affair, Even in Defeat

The turnout was low at U.S. Sen. hopeful Jim Oberweis’s election night at the Oberweis Dairy & That Burger Joint in Glen Ellyn.

Those present were mostly families who started arriving in the building around 6:30 p.m. While the kids were enjoying ice cream, parents stayed glued to the TV watching the numbers as they were coming in.

Late start to the program

The event was planned to start at 7 p.m. but it was delayed for one hour as results continued to come in. Even then, news was already pouring in on social media and on TV projecting U.S. Sen. Dick Durbin’s victory to serve his fourth term. Supporters remained unmoved by this information as they said these were only “projections” and that they will wait for the official announcement.

Once Durbin's victory was confirmed, Oberweis stepped to the podium, thanked his wife and family for their unending support.

“I could never have endured the ups and downs of the tough statewide race,” he said.

He also thanked the network of volunteers throughout Illinois, saying they are the unsung heroes of his campaign including, the African-America pastors who pledged their support to his candidacy as a way to shape the lethargy of leaders who run the state and nation.

“They were taking charge of a destiny and not accepting the spoils of a political system that was short-changing their neighborhoods,” Oberweis said.

“Disappointing,” said Rory Hoskins from Forest Park. “This is a time for change.”

“Mr. Durbin had plenty of time in office. I think it’s time to have him move on and bring in some new ideas,” he said.

Hoskins added that it was unfortunate Durbin out-fundraised Oberweis four-to-one. “The wrong guy won,” he said.

Jim Tobin, president of the Tax Payers United of America, said although it was not surprising that Durbin had been re-elected, Oberweis is still a state senator.

“He had not nearly enough money to spend up against Dick Durbin and going up against an incumbent is always difficult,” she said.

Henry said as a supporter, she appreciates the fact that he [Senator Oberweis] stepped forward and did that. “He’s a good man,” she said.

“He works well with Springfield still and he would have done a good job in Washington, D.C.”

“We are disappointed,” Henry said.