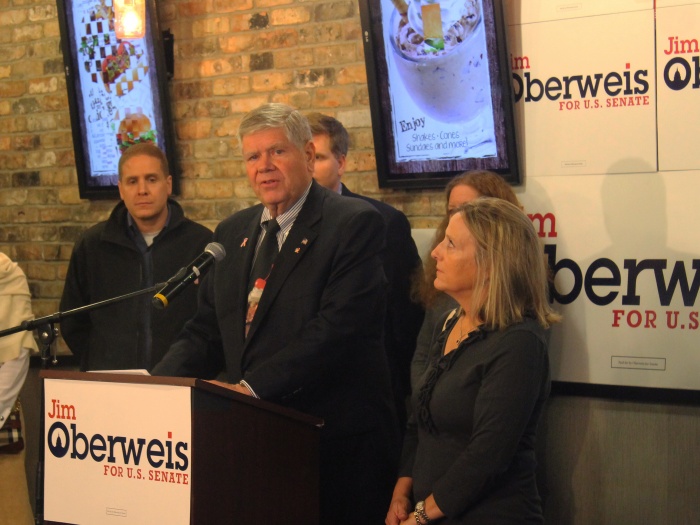 By Kiersten Sinko and Bree Stitt

Oberweis was considered a longshot in the race as Durbin built a huge fundraising and ad campaign in the closing weeks. He was trailing Durbin 51 percent to 45 percent with 30 percent of precincts reporting when he conceded.

“It’s very difficult to defeat an incumbent Senator,” said Oberweis after announcing his conceded defeat to Durbin. “It’s even more difficult to do it in a state that has the same predominant political philosophy as that incumbent, and especially where I was outspent four to one.”

After the polls closed and the numbers started to roll in, Durbin took about a 20 percent lead, proving that the amount of money in a campaign can make a significant difference in results. Durbin outspent Oberweis by raising over $9.88 million for his campaign, while Oberweis raised around $2.36 million.

“It’s not impossible, but it’s very difficult to overcome,” said Oberweis on being beat more than three-to-one in raising money for the campaign.

But Oberweis still had a positive attitude as he gave his speech. He said he still wants to bring more growth, change, and prosperity to the people of Illinois by continuing his work as Illinois State Senator.

“It’s the same fight,” said Oberweis. “To bring more growth and prosperity to the people of Illinois, and give all Illinoisans a voice, in a society where government is becoming a larger and larger role in our lives.”

Oberweis, an Illinois native, claims he has lived in the same home for 37 years, but questions have arisen over his wife living in Florida to avoid paying Illinois state taxes. The issue led to a terse exchange between he and Durbin during their third and final debate.

Over four decades he has helped create several jobs in Illinois, according to the campaign site. He is currently serving as the Secretary of the United Republican Fund.

On the other hand, Oberweis does more than just politics and work in entrepreneurship. He is also known for his family business, as well as his philanthropic work. His grandfather founded Oberweis Dairy, where he serves as the chairman.

Under his leadership, the company has grown to about 1,200 employees, when it started as a small home delivery company. He also founded the Oberweis Foundation, which is a charitable trust created to help children and adults in difficult economic circumstances.

Along with his successes in small business entrepreneurship and philanthropic endeavors, Oberweis is also an active supporter of the Republican Party, along with many other conservative organizations.

Oberweis had many intentions if he won election. He is committed to bringing down taxes and creating more jobs. In the forum on Chicago Tonight, he said he wanted to get kids off the streets and bring down the violence. However, despite his efforts to create more jobs, he has many sharp disagreements with his Democratic opponent in the race, Dick Durbin. These issues include gun-control, same-sex marriage, and the abortion debate, which Oberweis has been recognized greatly by the “pro-life” community for his support.