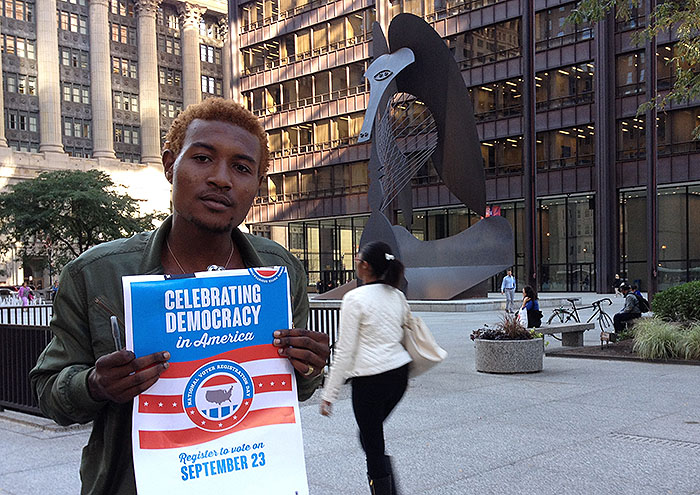 Online registration and extended grace period registration are two new referendums making it easier to vote in Illinois during the upcoming midterm elections.

Grace period registration and voting gives extra registration time for voters who miss the standard Oct. 7 registration deadline. A new provision for this election allows voters to register or update their registration and cast their electoral ballot in the same visit starting Oct. 8 up to and including Election Day.

Every early voting site will conduct grace-period registration from Oct. 20 through Nov. 1. Five regional sites will remain open only for same-day and grace-period voters on Nov. 4.

This means that voters who forget to register can still vote on Election Day.

Many other states, including Wisconsin and Minnesota, offer same day registration and voting. They are typically among the top states for voter turnout. In 2011, voters in Maine passed a “People’s Veto” referendum to overturn the governor’s repeal of their same day voting law.

“It’s one of those things that build over time,” said James Allen, spokesman for the Chicago Board of Election Commissioners. “It’s been in Wisconsin for over 30 years. Voters expect to be able to do this.”

“We’re dipping our toes in the water and testing it out,” Allen said. “This pilot program will essentially be a test to see if Illinois wants to move in the direction of full scale same day registration.”

Illinois saw low voter turnout for the March gubernatorial primaries. Statewide turnout was near 19 percent, including as low as 9 percent in some Chicago locations.

The idea of this program started when the Chicago Board of Elections organized the 2012 Voter Engagement community forum at the University of Illinois at Chicago. More than 100 people from all demographics around the city spoke about election concepts. People called for online registration, same day registration, and universal vote centers where anybody can vote at any location. Of the three concepts, two have become a reality.

Allen said that the new laws will have an impact on the midterm election but only time will tell how big of an impact.

“Laws passed this spring make it easier to vote in this election. But just this election,” said Sean Healy, a McCormick Foundation civic learning and engagement scholar. “Why not make these things permanent?”

Healy, who studies how public policy affects young people and voting, said that the Center for Information and Research on Civic Learning and Engagement (CIRCLE) has research that shows same-day voter registration laws have a positive impact on youth turnout.

“The new laws will affect both ends of the spectrum: young, old and working class folks,” Healy said. “These laws tend to have a positive impact for non-white voters. These folks tend to lean democratic.”

He said the jury is still out on whether early voting has increased voting. He says historically, the window for registration closes pretty early, about a month out from the election. Early voting usually stops a week before the election.

“It can have a real impact,” Healy said. “There have been lots of good efforts in recent years to make voting easier.”