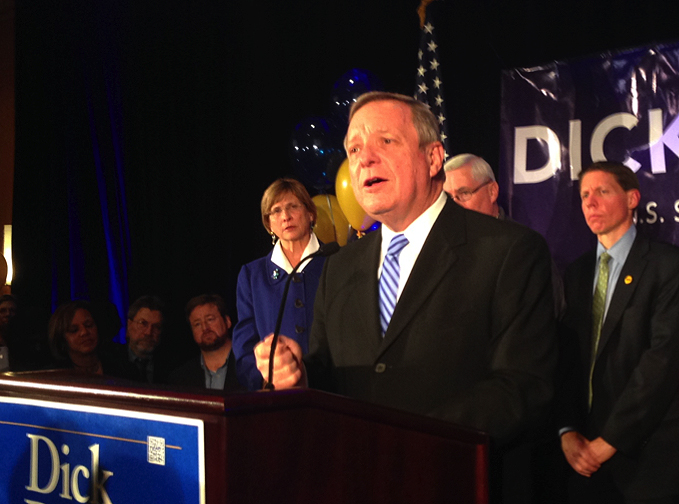 By John Zaccari and Delaney Lux

Joliet resident Andrea Simone kicked off the celebrations at U.S. Sen. Dick Durbin’s election night party, giving an emotional introduction to the man she says has “done nothing but support” her and her family after her husband, Tony, was injured in Afghanistan.

After the election results were called, Simone and her family were beyond thrilled.

“I feel overjoyed that we have a senator in the state of Illinois that, you know, whose values are in the right place and who wants to do the best for the people of Illinois,” Simone said.

Tony Simone suffered multiple injuries and brain trauma when his helicopter was shot down while on duty in Afghanistan.

Since meeting Durbin over a year ago, Andrea Simone has had no doubt in his abilities to win a fourth term.

“I felt pretty confident about the outcome,” Simone said. “I was hopeful.”

Although many media outlets called the race early in the evening, press assistant Camille Padilla said Durbin “would never” have considered the race in the bag until the votes had been counted.

“He’s been a senator for quite some time, but he brings this whole type of class that is unimaginable,” Padilla said.

Durbin came out to give his acceptance speech, close to 9:30 p.m. only after Republican opponent Jim Oberweis conceded.

“Some people may say this was his race, but he deserves it, he worked for it,” she said. “He was a true candidate, and he wanted to win the true way.”

Soon after Oberweis’ concession speech, Durbin reached the podium to give a short, to-the-point acceptance speech.

Before addressing his own family and staff, Durbin recounted the call he had received from Oberweis moments before.

“I thanked him and I told him, I made a promise that if I won this election, starting tomorrow, I’d be buying Oberweis ice cream,” said Durbin.

Durbin went on to thank his wife, his son and staff for all of their hard work in the election process.

Durbin finished his speech by outlining his goals and hopes for success in Illinois.

Durbin, who is now the first Democrat in Illinois to have successfully won a fourth term as a U.S. Senator, celebrated with guests after while listening to Van Morrison’s “Brown Eyed Girl.”