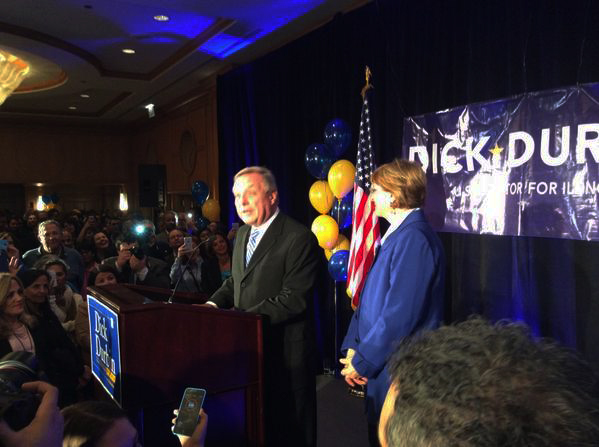 U.S. Senate: Durbin Will be Back for Fourth Term

By Sarah Perkins and Jackson A. Thomas

Jim Oberweis campaign ads painted U.S. Sen. Dick Durbin (D) as a career politician who had spent more than three decades in Washington D.C. and more than a decade in the Senate.

They're about to get six more years of Durbin.

Durbin earned his fourth term in the senate Tuesday night in a convincing way by winning 51 percent of the vote, with 30 percent of precincts reporting. Oberweis, his Republican challenger, had 45 percent when he conceded the race.

Durbin’s campaign party celebrated at the Westin River North hotel, anxiously anticipating the results for the evening. Many news sources reported Durbin won as election polls closed at 7 p.m., although the race wasn't officially over until Oberweis delivered his concession speech around 8:45 p.m.

Durbin appeared to make his speech around 9:30 p.m. to a crowd of several supporters. Andrea Simone, and her veteran husband, Tony, who served in Afghanistan and sustained injuries, introduced Durbin with a testimonial. Simone said Durbin provided her family with great help, reflecting his supportive veteran values.

“The word politician often has gotten a bad connotation in this area, and I can certainly say that Senator Durbin does not meet that idea,” Simone said. “Every time that I interact with him, he not just is creating laws to gain votes, he is doing what he is doing because he wants to see my family succeed.”

Durbin was greeted with uproarious cheers of “Durbin, Durbin!” as music played across the Westin’s Astor Ballroom. His wife, Loretta, joined him on stage, beaming as they waved to the crowd. Durbin thanked Andrea for her introduction and recounted an anecdote referencing a conversation during the Oct. 29 debate on “Chicago Tonight” at WTTW Channel 11.

“A few minutes ago, I got a phone call from State Sen. Jim Oberweis, conceding the election and congratulating me on this victory,” Durbin said. “I thanked Senator Oberweis … and I told him that I made a promise that if I won this election, starting tomorrow I would be buying Oberweis ice cream.”

Entering the final days of the campaign, Durbin held a commanding lead in both the polls and in fundraising.

The incumbent Democratic senatorial candidate, Durbin was first elected to the U.S. Senate on Nov. 5, 1996. He is the 47th U.S. Senator from Illinois, serving as the state’s senior senator and the convener of Illinois’ bipartisan congressional delegation.

After Durbin thanked his opponent, he thanked those who provided him great help throughout his campaign.

Durbin mused about what he took away from his campaigning and what he hopes to bring in his upcoming term.