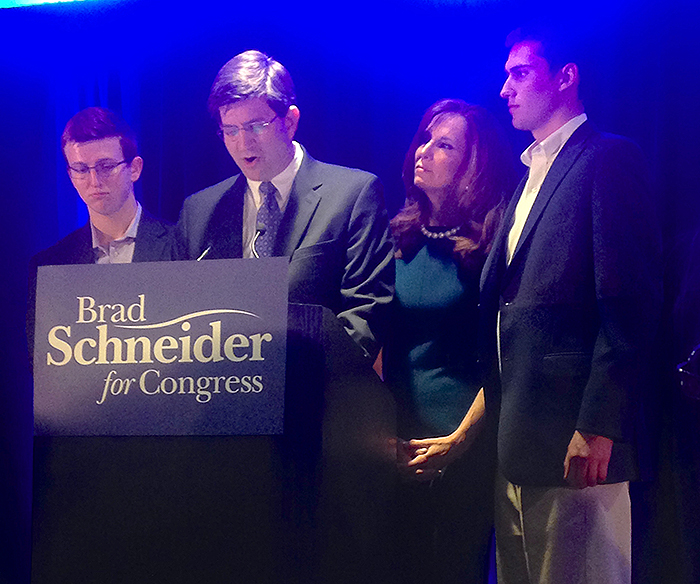 Schneider spoke to his supporters at the Hilton Hotel in Northbrook just after 9:30 p.m. Two years ago, Dold lost to Schneider by less than 3,400 votes. This time, Dold received a total of 92,903 votes to Schneider’s 86,325.

Schneider took to the stage in front of about 100 people for a congressional speech alongside his wife and two sons. While thanking those who have helped with his campaign and supported him, he mentioned that the campaign “fell short of our goal but came incredibly close.” He also dedicated a portion of his speech to his wife, Julie, whom he kissed and said is his “best friend.”

With a number of polling places remaining open past the 7 p.m. deadline by as many as two hours, results of the race were delayed. Final results began to roll in after 9 p.m.

In a small banquet room at the Hilton Hotel in Northbrook, nearly 100 guests gathered and left with heavy hearts. Among those in attendance were many family members and friends, most of which were sporting “Team Brad” baseball T-shirts and a “’14” on the back, with a grammar faux pas with the inward facing apostrophe. Some just showed their patriotism by wearing red, white and blue, while others just simply put on a “Brad Schneider for Congress” sticker.

Many party-goers frequented the media tables where journalists were stationed on their laptops and cell phones and had access to the county clerk’s office websites. Although everything was available to the public via the Internet, attendees kept asking media what the results and predictions were.