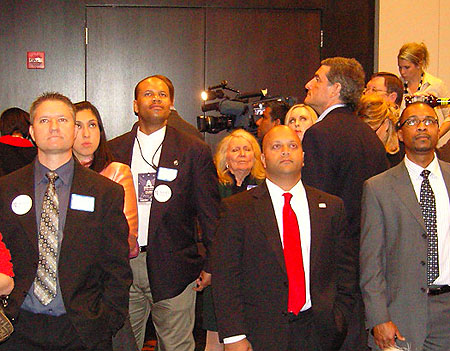 Illinois Republicans look on as results are announced. (Photo by Julian Zeng)

By Julian Zeng and Eva Green

An exuberant crowd of Gov. Mitt Romney supporters who gathered at the Chicago Republican Party at theWit Hotel became dispirited as incumbent president Barack Obama was reelected for a second term Tuesday night.

Party attendees in theWit Hotel third floor ballroom were optimistic about a Romney election early in the evening – Jason Wynn, a student and supporter, said, “I thought since the get-go that it’s going to be Romney all the way.”

Others were equally hopeful, their eyes glued to the many TV projection screens around the ballroom that broadcasted up-to-the-minute voting results from networks like ABC and Fox News.

“I’m here just because of what the sign says, because I believe in America,” said supporter Suanna Lynn, referring to the red, white and blue signs emblazoned with the Romney/Ryan ticket that lined the cream-colored walls.

Lynn said she thinks corporations should have a lower tax rate and thinks this will build incentives for job creation domestically. Higher taxes will push businesses overseas, she said.

Yet, as more polling returns were reported, the atmosphere became tenser. As both candidates were tied in electoral votes, each holding 153 just after 9 p.m., Romney’s supporters stood in angst.

Later, only a smattering of applause and cheers broke out when projections showed Romney winning states like North Carolina at about 10 p.m. Obama’s electoral vote count jumped to 244 following a win in California, and his projected victories in swing states like Florida and Ohio, as reported by a number of outlets, drew audible groans.

32nd Ward Committeeman John Curry remained optimistic for a late surge in Ohio votes for Romney, citing a remaining “26 percent plus of the vote and a 50,000 vote margin out of millions cast” to be accounted for.

“Anything can happen the rest of the night, so I’m not throwing in the towel yet,” said Curry.

28th Ward Committeeman Shawn Walker agreed with his colleague, saying it was “a little bit too early to call it. Although we’re down, it’s not over yet.”

At 10:20 p.m., a number of outlets finally projected President Obama to win re-election with 275 electoral votes — five more than the requisite 270, as opposed to Romney’s 201 votes.

Romney supporters in the ballroom had mixed expressions of shock and dismay upon hearing the results, which were shortly followed by State Treasurer and Chairman of the Romney Illinois Campaign, Dan Rutherford, taking the stage to address those in attendance.

“It’s not over til it’s over, but I think we all know what’s going to happen here in the pivotal states,” said Rutherford in the closing speech of the night. “Thank you very much for your energy and your spirit and for helping keep a good two-party system alive in the state of Illinois, and particularly in the city of Chicago.”