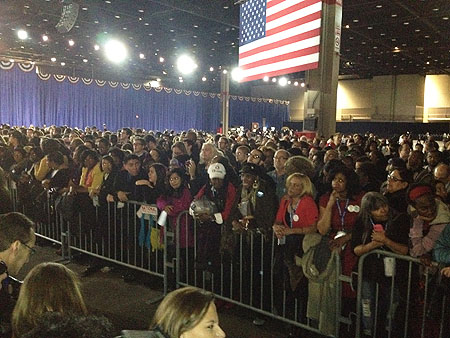 By Josclynn Brandon and Angelica Robinson

Among the list of high profile politicians and celebrities, were campaigners. The everyday people who volunteered their time to ensure the re-election of President Obama.

Ben Finkenbinder, a Midwest Press secretary for the Obama Campaign, said the volunteers on the ground are, “the engine of this campaign.”

Understanding that Wisconsin would be a key state in helping him win re-election, supporters went door to door Nov. 3-5 to help increase voter turnout.  For doing this, Obama offered supporters an opportunity to a ticket to his Election night watch party in McCormick Place.

“We invested in a strong ground game well over a year ago across the entire country,” said Finkenbinder. “And making sure that they have all the tools they need to make sure they can go forward.”

Finkenbinder said it was important to make sure the volunteers had the resources they needed to talk to their neighbors and their friends about the election.

William Ocasio went out to campaign for President Obama because he believes Obama will look out for the middle class.

“I think major issues [like] Obamacare is probably the most important thing for me,” Ocasio said. “On the economy on taxes he’s the best person.”

Raw video: The crowd gets pumped as results come in.

Ocasio was able to attend the election night watch party because of his help canvasing Iowa and Wisconsin—two of the battle ground states.

The key factor in the president’s re-election was his ability to pull swing states including, New Hampshire, Pennsylvania, Wisconsin, Iowa, Virginia and Nevada.

“I think the president ran a really good campaign, especially in the last few weeks,” said Gov. Pat Quinn.. “This was a battle for the soul of America.”

The audience erupted after it was announced that President Obama had been re-elected for a second term in office. People in the crowd cheered, danced, hugged, and shed tears of joy.

Before taking the stage for his acceptance speech, Obama addressed his supporters on Twitter and said, “This happened because of you. Thank you.”

“Coming from Illinois I think we are all proud of Obama,” Quinn said. “He has a Philosophy that I think will move our country forward and a program that will make America better.”