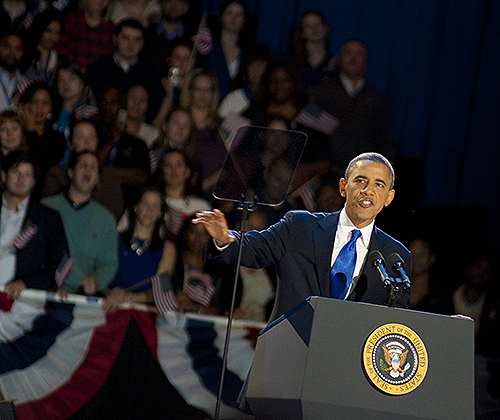 By Jeremy Mikula and Ryan Moye

As the final projections came in and supporters at McCormick Place erupted in applause Tuesday night, the news became clear: President Barack Obama had been reelected for a second term.

In giving his victory speech, the president said, “I return to the White House more determined and more inspired than ever about the work there is to do and the future that lies ahead.”

Around 10:15 p.m. local time, NBC News declared the president had won a second term. That projection was quickly followed by similar ones made by Fox, CNN and ABC.

After the projection, the president’s campaign tweeted, before releasing a longer statement on BarackObama.com:

“I want you to know that this wasn’t fate, and it wasn’t an accident. You made this happen… Today is the clearest proof yet that, against the odds, ordinary Americans can overcome powerful interests.”

Meanwhile, the Republican Party was projected to retain control of the House of Representatives.

Just after 12:37 a.m. Central Time, the president and the First Family took the stage at McCormick Place to momentous applause.

“America, I believe we can build on the progress we’ve made and continue to fight for new jobs and new opportunities and new security for the middle class,” Obama said in his victory speech. “I believe we can keep the promise of our founding, the idea that if you’re willing to work hard, it doesn’t matter who you are or where you come from or what you look like or where you love. It doesn’t matter whether you’re black or white or Hispanic or Asian or Native American or young or old or rich or poor, abled, disabled, gay or straight. You can make it here in America if you’re willing to try.

“I believe we can seize this future together because we are not as divided as our politics suggests. We’re not as cynical as the pundits believe. We are greater than the sum of our individual ambitions and we remain more than a collection of red states and blue states. We are, and forever will be, the United States of America.”

Obama, who by 8 a.m. Wednesday held a 2.6 million lead in the popular vote, cited immigration reform and stopping a “reliance on foreign oil” as two goals he hopes to work on in his next term.

The president also congratulated his counterpart in what he called a “hard-fought campaign.”

“We may have battled fiercely, but it’s only because we love this country deeply and we care so strongly about its future,” Obama said. “In the weeks ahead, I also look forward to sitting down with Governor Romney to talk about where we can work together to move this country forward.”

Key to the president winning reelection was his success in a number of swing states – particularly Pennsylvania and Wisconsin, which combined totaled 30 electoral votes for Obama, as well as victory in Virginia and a projected win in Ohio.

Obama won New Hampshire, Pennsylvania, Wisconsin, Iowa, Virginia and Nevada while Romney picked up North Carolina and Indiana. By 11:00 p.m. local time, results in Ohio and Florida – 18 and 29 electoral votes respectively – were still too close to call, however the president was later projected to be the winner in Ohio, while also having a slight advantage in the Sunshine State.

Gov. Romney initially declined to concede the election, according to the Chicago Sun-Times. Natasha Korecki reported Romney’s campaign wanted to see “firm numbers from Ohio, which was still tallying some precincts late Tuesday. Numbers in Florida were also still out.”

Romney would however concede the election to the president shortly after 11:55 p.m. Central Time. Speaking in Boston, Romney offered his congratulations to Obama.

“This is a time of great challenges for America, and I pray that the president will be successful in guiding our nation,” Romney said. “The nation, as you know, is at a critical point. At a time like this, we can’t risk partisan bickering and political posturing. Our leaders have to reach across the aisle to do the people’s work.”

Romney also spoke of looking to teachers, religious figures, parents and guardians, “job creators,” and also Democrats and Republicans to “put people before the politics.”

Those in attendance – mostly supporters and volunteers on the president’s campaign – began filing into McCormick Place around 7:30 p.m. The convention center was euphoric as each of the results came in – the president’s supporters cheering loudly when projections were made in his favor and booing for projections that favored Romney. Songs such as “Signed, Sealed, Delivered I’m Yours” by Stevie Wonder and “We Take Care of Our Own” by Bruce Springsteen received considerable play over the PA system.

Some supporters came from all over, including Ivo van Sprosen, who is from the Netherlands.

“Well first of all it’s good for the United States I guess to have this president, but for the rest of the world because of his foreign policy,” said van Sprosen, who said he works in local politics. “The atmosphere was really electric and he had a great speech”