By James Fegan and Steve Wojcik

The Democratic incumbent congresswoman was sporting 65.4 percent majority over Republican challenger Timothy Wolfe at the time, with over 70 percent of precincts reporting, so the decision was far from rushed.

Yet cheers for the dominant showing were subdued at Schakowsky’s victory party in Evanston, if they were present at all. After all, the guest of honor had departed an hour earlier.

Rather than revel in a victory that granted her an eighth consecutive term in the House of Representatives, Schakowsky offered a short statement of gratitude and encouragement to an audience composed mostly of staffers and colleagues, before heading out to President Obama’s reception at the McCormick Place in downtown Chicago. She barely touched the topic of her own re-election.

“I’m very hopeful my election will go just fine,” Schakowsky added at the end of an approximately two-minute long address before departing to celebrate a far more hotly contested race.

The party Schakowsky left behind was equally focused on other elections, as loud cheers rang through a crowded private room in the Prairie Moon restaurant in Evanston with every announcement of a state being called in favor of the President, or for a congressional victory for a Democrat. The official confirmation of Schakowsky’s triumph over Timothy Wolfe, which never hinted at a margin of victory under 30 percent from the moment the polls closed, yielded no such explosion

“I’ll be mad if we don’t get 70 percent” said one party attendee to another. As of  Wednesday morning, reports indicated that Schakowsky’s supporters will have to make due with 66.1 percent. 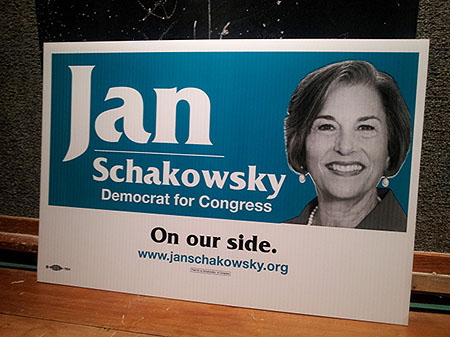 Rep. Schakowsky actually cleared 70% of the vote in her first six Congressional elections, and the 66.1% represents one of her weakest showings, despite the lack of political experience of her opponent. Yet her campaign does not see this as reason to think her string of overwhelming victories is coming to an end soon, especially not on a night filled with Democratic gains.

“We expect to continue to improve,” Alex Armour, Political Director for Congresswoman Schakowsky, said, “as these voters in this district get to know Jan, and get to know how well she represents her constituents.”

More blowouts like Tuesday’s can certainly be expected for Schakowsky if she continues to enjoy fundraising advantages like the one she held over Wolfe in the 2012 campaign. According to OpenSecrets.org, the more experienced Schakowsky organization raised over $1.2 million, whereas Wolfe, a CPA entering into politics for the first time in response to a vacuum of Republican candidates, failed to eclipse $50,000 in total campaign contributions.

That financial advantage contributed to a campaign that overcame an endorsement from the Chicago Tribune, which backed the Republican Wolfe ans praised his “fiscal restraint.” But to Schakowsky’s campaign, the ease of Wolfe’s defeat testifies to the irrelevance of endorsements from the famed newspaper.

“Whatever point [The Tribune was] trying to make fell upon the deaf ears of the voters of the state of Illinois,” Armour said, “Probably because of lot of them don’t subscribe or read the Tribune anymore.”

An unchallenging rout back to Washington allowed everyone to move quickly away from campaign-related drama. For Tuesday night at Prairie Moon, that meant tracking and cheering for other races across the nation while campaign signs reading “On our side.” sat idly against walls and on tables, but it also allows for Schakowsky’s staff to look forward to getting back to work in Washington.

“There are a lot of big issues that face this country that we haven’t been able to tackle due to Republican obstructionism,” Armour said, “Hopefully, if the President prevails tonight we will see a new spirit, and a new understanding.”