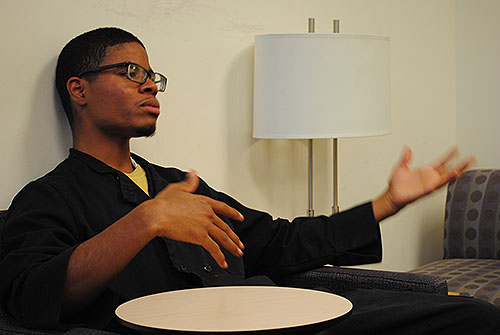 Henry J. Williams, a homeless registered voter and advocate
for the Chicago Coalition for the Homeless. (Photo by Nikara Johns)

By Scott Sutton and Nikara Johns

For Henry Williams, registering to vote has been part of a hard-fought battle of transforming from teenage drug dealer to advocate for the homeless.

Williams, who has been homeless in Chicago for two years, works side-by-side with  advocate Dollie Brewer, the woman who encouraged him to register to vote.

“To be homeless and in the situation I’m in, having a voice in the community is so important to me,” said Williams, 22. “I don’t fight for myself, I fight those people who don’t have a chance to speak and who don’t know what to say.”

President Obama and Mitt Romney have campaigned hard for the last year, making sure to touch on every demographic they could. But, according to the Chicago Coalition for the Homeless there are 105,338 people in this city that do not fit either candidates’ typical target audiences.

They are not likely to watch the televised debates or receive political literature through the mail, they do not donate to any Super PACs. And they are not subject to political ads. This is not out of apathy, or lack of desire or radical political views. It is simply because they are homeless.

Brewer, an election judge and CCH’s Senior Community Organizer for the Women’s Empowerment Project, serves 11 homeless shelters within Chicago’s city limits. Her efforts alone have registered at least 600 homeless voters in the past year.

“Voting is another means of empowerment,” Brewer said. “That voter registration card is another form of ID you have in your pocket that you can feel good about.”

For many homeless people, such as Williams, voting is more than just empowerment. It is a necessary step to enact personal and social change.

But the process is not as simple as just registering. For many homeless people, simply getting the paperwork to register to vote is a challenge. Brewer had to hand-deliver the 600 voter registration forms that she got filled out -- not only to the shelter, but back to the Chicago Board of Election Commissioners.

For shelter residents, the price of a mailing stamp can be the difference between being able to mail in their registration form and forgoing voting in an election.

Cost is not the only issue, though. Being homeless presents the unique problem of having no address to use on a voter registration form. But then what about those 600 homeless voters Brewer registered? According to her, the CCH and its lawyers have found a way around this particular challenge.

Because every voter registration form has a valid home address attached to it, it is impossible to truly know how many homeless voters are actually hitting the polls.

Regardless, Brewer and Williams agree that the energy and enthusiasm among homeless voters that was present during President Obama’s 2008 campaign simply isn’t there this time around. Williams points to a lack of advocacy for voting in the communities that need it most.

“We need more advocacy in those communities where people don’t feel like they have a voice,” Williams said. “Some people just don’t know where to go to vote or how to register to vote because they become so caught up in poverty it just doesn’t seem important.”

This sentiment, according to Brewer, is how the cycle of homelessness equating to voicelessness begins. The people who often are affected the most by -- and rely the most on -- government policy are the ones who have the hardest time voting.

In their attempt to empower and give a voice to the homeless, Brewer and Williams have lobbied for homeless rights in front of Illinois senators and congressmen, and even at a City Council budget meeting last month. But their message doesn’t apply only to the homeless. It resonates far beyond any class distinction.

“I think every young individual in Chicago should vote,” Williams said. “One day older people are going to sit down to watch TV and see us running for president, or congressman or senator.”