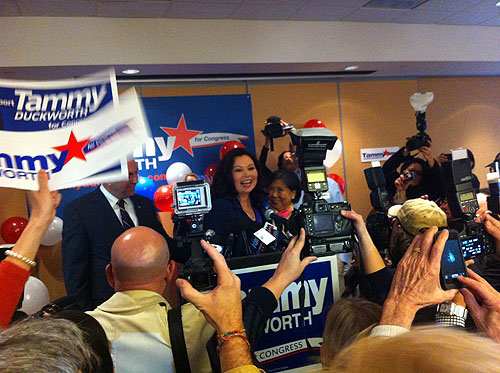 By Monica Kucera and Hazelmarie Anderson

After a long run of tense and competitive campaigning between Democrat Tammy Duckworth and Republican Rep. Joe Walsh, Duckworth came out on top Tuesday night in Illinois 8th Congressional District.

Duckworth won 55 percent to Walsh's 45 percent, according to election results. Duckworth led in all three counties in the district: Suburban Cook, DuPage and Kane.

“I am so honored to be here. So humbled,“ Duckworth told supporters at her election night rally in Elk Grove Village. “As a nation we have many challenges but I am ready to face them.”

Duckworth is a native of Thailand and is an Iraq military veteran. This was her second run for Congress after losing to Republican Peter Roskam in 2006.  Since then, she has been an official in the Illinois Department of Veterans Affairs and former undersecretary in the federal veterans agency.

Their congressional race gained nationwide attention for months, highlighted by their debate Oct. 9 on WTTW. Candidates’ discussed issues ranging from immigration to abortion – both brashly disagreeing on topics across the board.

Duckworth supports Medicare while Walsh believed the program, along with social security, needed a lot of amending. He also opposed gay marriage and abortion rights, whereas Duckworth believes women have the freedom to make their own decision and should be “appalled” by Walsh’s comments on this issue.

Walsh insisted Duckworth used her military service and disability to her advantage. Since many knew she lost both her legs after her Black Hawk helicopter was shot down in Iraq, Walsh believed she sought out sympathy and used it to gain followers.

He fired at her saying she isn’t a “true hero.” Duckworth didn’t take his remarks to heart, but feared it might hit home to fellow veterans.

“She knows how tough it is to talk about service,” said Anton Becker, Duckworth's press secretary. “She wasn’t worried about herself, she was worried for other veterans.”

Tom Keenan, a former Marine, said, “He’s [Walsh] not a hero so he wouldn’t know one.”

In response to Walsh’s negative television advertisements, Duckworth called Walsh out on his lack of child support payments. She personally called him a “deadbeat” dad, which caused Walsh’s oldest son to speak out on his father’s behalf. “Please, Ms. Duckworth, try to win this campaign by focusing on issues where you disagree with our dad. But don’t attack him as a father,” said Joe Walsh, Jr.

“Walsh wanted to make this about character,” Becker added. “He’s a bully.”

As days led up to the election, Conservative Super PAC “Now or Never” pulled nearly $2.5 million from Walsh’s campaign. This money meant to “bury” Duckworth was then put elsewhere.

However, Duckworth’s true supporters were able to see through the harsh advertising and money-fueled campaigning done by Walsh.  Many came out to support Duckworth at her election night rally. They had no problem expressing their feelings for Tammy as most shouted, “I love you Tammy!” when she walked in the room.

Octavia Mitchell, a fellow war veteran, got emotional when she explained she wouldn’t be where she is today without Duckworth’s encouragement. The two met at a veteran’s event in 2010. When Mitchell found out Duckworth was running for Congress, she was thrilled.

“She renewed my strength,” Mitchell said after explaining how a stroke left her in a wheelchair. “She gave my life a new perspective.”

Duckworth inspired Mitchell to keep moving after her stroke. And, as a result of her positive support, Mitchell now scuba dives, rock climbs and kayaks among many other physical activities.

Duckworth continued that positive message to her supporters at her election night rally. She didn't take any jabs at Walsh, but promised that on her first day in office she “will remind the Congress we are here [for] service, not to obstruct.” 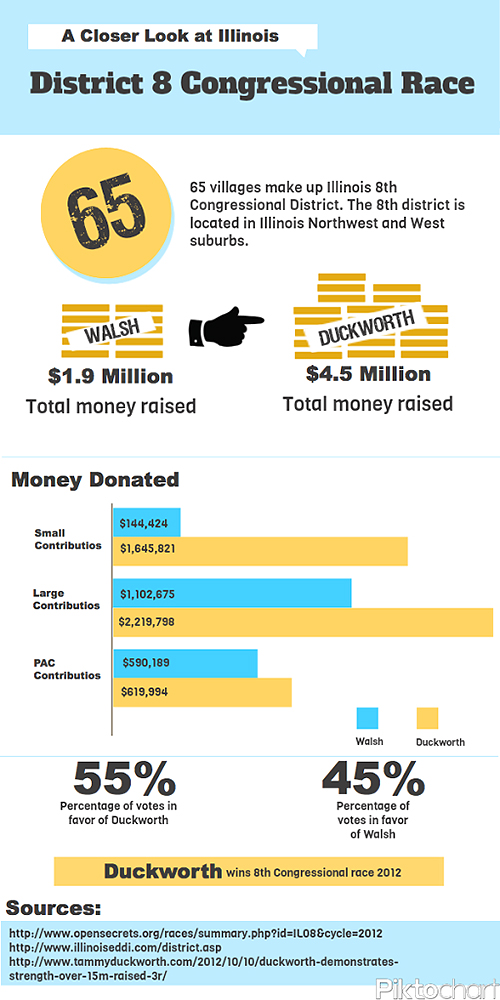