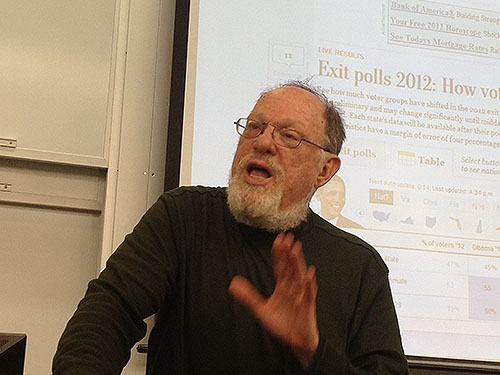 President Obama was re-elected and the House and Senate didn't get the extreme makeovers that some expected. But DePaul University Political Science professor Michael Mezey told students Wednesday night that there was one big surprise on election night.

“This was the first time that I remember that the presidential vote was called for a candidate at a time when he was trailing in popular vote,” Mezey said. “When they called the election for the president he was behind by 300 or 400 thousand popular votes.”

Obama earned 303 electoral votes to Romney’s 206, and captured several key battleground states -- Ohio, Wisconsin, New Hampshire, Iowa, Virginia, Nevada and Colorado. Mezey said that with Obama capturing these battleground states, it is “in some respects the most convincing part of his election.”

“As it turned out, the president could have won without either Ohio or Florida by taking the somewhat smaller states by relatively comfortable margins," Mezey said. "Even had the two closer states of Florida and Ohio gone the other way, he [President Obama] still would have had a majority of the electoral votes.”

Video: Mezey talks prior to the election about the effectiveness of the electoral college.

What happened with Ohio and Florida was a question that was on everyone’s mind in the room. Both states tend to fall Republican, but have what Mezey refers to as swing counties -- counties located near major metropolitan areas that go back and forth from one party to the next. He said Obama did well in those areas.

He also said there are a couple things that explain what happened in Ohio, one being the auto bailout.

“The auto bailout was very important in that state. Ohio and Michigan are two states that do the most in regards to the auto industry. The President’s decision to do that combined with Romney’s public opposition to it, really hurt him [Romney] in Ohio.”

Florida's race is so close that the huge amounts of absentee ballots still need to be counted. Mezey said that issues with Florida are common.

“It wouldn’t be an election unless we had something going on in Florida,” he said.

At one point, Mezey referred to an exit poll that was posted by the Washington Post. It broke voters down by categories and stated which candidate gained the higher percentage.

“It seems to suggest from the exit polls that the president was relatively successful in depicting himself as the moderate candidate,” Mezey said. “The candidate who could attract people who thought of themselves in the middle and that Romney’s attempt to do that was not entirely successful.”

One of the top issues on the exit poll was the economy. Mezey said those who thought that the national economic condition was excellent or good would vote for the President, and those who thought it was not so good voted for Romney.

“I take this with a grain of salt. I’m not sure if people’s perception of the economy determines their vote as much as their vote tells them how they should view the economy.”

Although looking at the map from this election shows a sea of red, Mezey said the argument could be made that Romney lost because he wasn’t a true conservative, and was unable to convince cultural conservatives that he was.

“When you look at the map of this election, you will see a huge sea of red with little dots of blue throughout much of the country,” he said. “The sea of red is where, for the most part we have cows and trees and bushes, and the dots of blue are where the people live. The cultural conservatives appeal is to rural America, and it’s becoming a decreasing portion of the American population. “