According to the Illinois Liquor Control Act of 1934, voters in any precinct in the City of Chicago can vote an entire precinct dry through a local option referendum. No liquor licenses can be issued in a precinct that has been deemed dry.

There have been 1,329 assaults that had occurred during the month of April according to the City of Chicago data portal. They range from simple to various forms of aggravated assault. This searchable map compares the assaults that occurred in April to the dry precincts in Chicago to see if there is any correlation between the two.

The assaults fit in between the dry precincts like a puzzle piece in some areas of the city, while in other areas there is no inverse relationship between assaults and the sale of alcohol. In fact, the map illustrates that the majority of dry precincts are on the south side of city, where several of April’s assaults occurred. 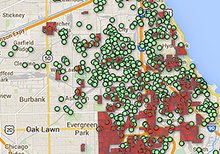