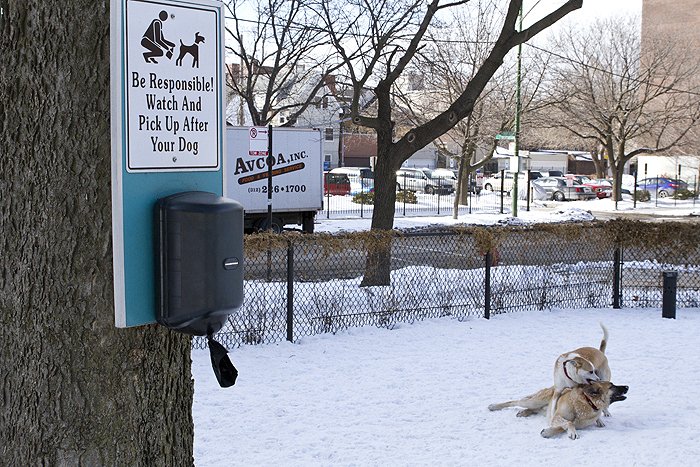 Waste bags and signs are posted in parks to encourage cleanup. (Photo/Brianna Kelly)

Editor's note: Ald. Bob Fiorietti (2nd) recently talked about the explosion of the rat population in Chicago after the long winter. In discussing it, he mentioned the role that dog waste plays in attracting the vermin. This story explores the issues that Lakeview -- and the rest of the city -- has been dealing with regarding dog waste.

By Brianna Kelly and Arlyn Crabtree

After a long, frigid winter, Chicagoans are looking forward to warmer temperatures. But the melting snow has revealed an unpleasant sight -- piles of dog waste that irresponsible owners abandoned throughout the season.

“There’s always a problem, but there’s real seasonal problem,” said Rodd Zolkos, a Lakeview resident and dog owner. “It seems like in the winter for some reason a lot of people stop picking up after their dogs, and when the snow melts away it really becomes quite apparent.”

Spring brings forth excessive dog poop that’s littered among commercial and residential sidewalks, parkways, streets and public parks. But many people believe the problem is significantly worse this year due to the record snow accumulation and subzero temperatures, including two polar vortexes.

“Given how harsh the winter was, I think probably there was even more irresponsible dog owner behavior going on than normal,” Zolkos said.

When people fail to pick up after their dogs they’re not only doing a disservice to their community, they’re also directly violating the local law.

The citywide Removal of Excrement ordinance states that “no person shall appear with a pet upon the public ways or within public places or upon the property of another, absent that person’s consent, without some means for the removal of excrement; nor shall any person fail to remove any excrement deposited by such pet.”

Of course, the ordinance excuses legally blind people who are unable to clean up after their guide dogs. Everyone else is subject to a fine between $50 and $500 when they fail to follow the ordinance.

And there also are many health risks associated with excessive amounts of it, including the spread of disease.

“We get our dog good veterinary treatment, and it concerns me that people are irresponsible enough to not pick up after their dogs,” Zolkos said. “I wonder if they are getting adequate care for their dogs and whether their dogs might not have some types of parasites they are passing on.”

The poop piles are dormant landmines that are easily tracked through by unsuspecting pedestrians and other animals, creating the potential for bacteria and parasites to spread in a variety of ways and cause illness.

“For obvious reasons the dog feces is problematic,” said Marta Juaniza, assistant press secretary at the Chicago Park District. “People step in it. Recreational equipment, like baseballs and footballs, roll in it. Children fall down in it.”

It also can have adverse effects on the city’s efforts to contain the rodent population because rats are attracted to feces, according to Chicago’s Rodent Control Services. If there’s an excessive amount of dog waste for them to feast on, they will breed at an alarming rate. This brings up more health concerns because rats can carry pathogens.

“Not picking up after your dog is not only unsightly, it is unhealthy for the city,” said Molly Poppe, director of public affairs at Chicago’s Department of Streets and Sanitation. “It is a public health risk, and it does pose a threat risk to the community because [dog waste] can attract rats and it can attract some other issues that you might not think of if I just don’t pick up after my dog this one time.”

Many dog-friendly areas, such as Lakeview, post signs and waste bag dispensers to encourage dog owners to clean up after their animals, though it’s not always effective. Lakeview residents have easy access to some of the city’s most prominent dog-friendly areas, including the dog beach at Belmont Harbor and Wiggly Field, which was the first dog park to be established in Chicago.

“ZIP code 60657 is home to one of the largest populations of dogs in the United States,” said Erin Duffy, director of communications and community outreach for Ald. Tom Tunney (44th).

Her office includes reminders of the importance of curbing dogs in its weekly newsletters and offers signs to residents that read, “Pick it up!” to post on parkways.

Melissa Berkshire, who owns a small dog-walking company, frequently cleans up abandoned poop when she takes her charges to a dog park. She said she has noticed excessive dog waste at some dog parks more than others. She thinks Montrose Beach is the worst, especially because it’s an area shared by dogs and beachgoers.

The city’s 21 dog-friendly areas rely on concerned residents, such as Berkshire, to help keep it clean, when dog owners initially decline to do so.

Nicole Hrycyk, president of the Portage Park Dog Park Committee, organizes monthly cleanups to keep her neighborhood dog park clear of excessive dog waste. Her committee also does a lot of fundraising to pay for poop bags and pee gravel.

To establish a dog-friendly area in Chicago, the city’s Park District requires the formation of a dog park committee that promises to pay for, maintain and clean the area within the park. Hrycyk said once a committee is established, it must get signatures from residents of the neighborhood and raise approximately $150,000 to pay for the park’s construction. After the city designs and builds the dog-friendly area, the dog park committee is solely responsibly for its upkeep.

However, Hrycyk and others agree it is ultimately the dog owners’ responsibility to clean up after their pets.

“In the park there certainly is an issue,” Hrycyk said. She sees poop left behind frequently, especially during the winter months when the ground is covered in snow.

She believes most people think someone will come and clean it up, which is not the case. Even her committee’s monthly cleanups are voluntary. They are not required by the Chicago Park District to keep the dog-friendly area open. However, Hrycyk said the cleanups are necessary to keep waste levels at a minimum and encourage dog owners to continue bringing their animals to the park.

Back in July, the Movies in the Parks series at Fulton River Park had one sponsor pull out of the event because of irresponsible dog owner behavior and an extreme amount of dog waste in the park, outside of its designated dog-friendly area.

Hrycyk said she realizes there could be consequences if these areas aren’t properly maintained, which first and foremost means cleaning up after the animals that utilize the space.

“This is our area,” she said. “We are responsible for this. If we don’t keep it up the Park District could shut us down, and nobody wants that to happen.”