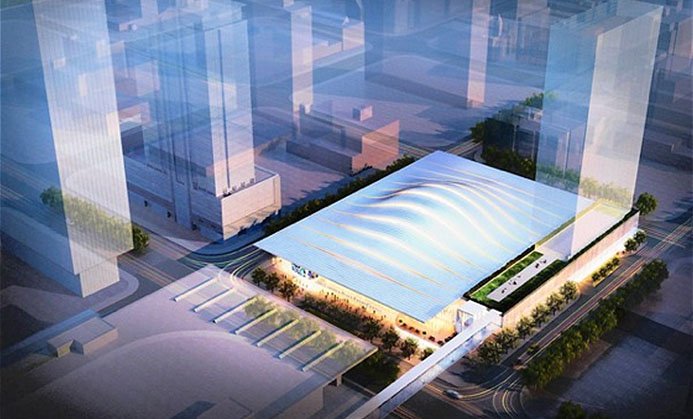 Jim Reilly, chief executive of the municipal corporation known as McPier, said there was no argument over the selection of the final six candidates vying for the design rights.

“All agreed that Pelli’s was the design to go with,” Reilly said.

The Connecticut-based firm, made famous by its work on the World Financial Center in New York and the Petronas Towers in Malaysia, recently designed DePaul's theater school.

The design that won the firm the $7.2 million contract for the McCormick event center features elegant glass walls, an undulated roof and a sunken arena that will be visible to pedestrians. A chief concern was choosing a design that minimized adverse impact on the surrounding neighborhood as the community feared a concrete box of dead space on the area bound by Cermak Road, 21st Street, and Prairie and Indiana avenues.

“We have designed a light, luminous event center that we hope will be a good neighbor and a dynamic expression of the events that it will house,” Fred Clarke, senior principal of Pelli Clarke Pelli Architects, said in a press release.

Reilly praised the design as “complementary to the neighborhood” and emphasized that the sunken arena ensures that at 45 feet high, the event center will not impose on the surrounding buildings.

“I think the neighbors have to feel good about it,” said Jack Greenberg, McPier chairperson.

The building, scheduled for completion in the fall of 2016, will also host professional meetings, concerts and special events, including 60 events its first year. The winning design includes opportunities to expand for retail, dining, entertainment and two hotels as part of a future entertainment district.

Rev. Dennis Holtschneider, C.M., president of DePaul, said in a statement: “Pelli architects were terrific about addressing faculty input into the final design of DePaul’s Theatre School and in projecting an accurate budget. I am confident Pelli Clarke Pelli will design an equally special event center that will make the South Loop proud.” 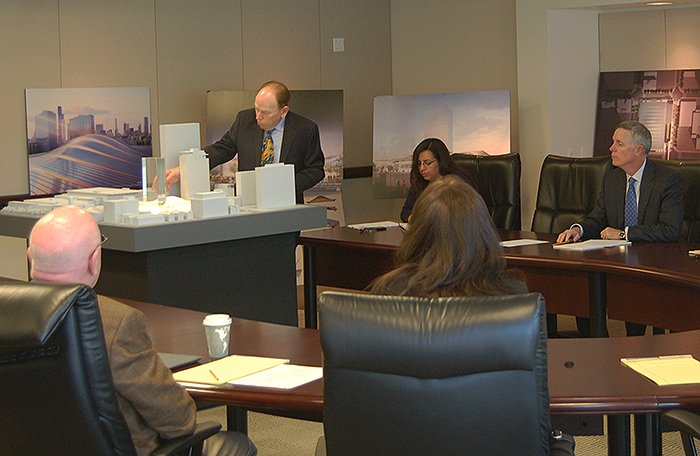 McPier board members look at scale models and renderings of the DePaul arena and McCormick Place area.
(Photo/Joe Ruppel)

Controversy has swirled around the event center since its announcement in May. Critics have questioned the city’s $33 million commitment in tax-increment financing for the $173 million facility–which will also require $70 million apiece from DePaul and McPier–amid fierce cutbacks in other areas.  The city has also pledged additional millions for future development.

“Using our TIF dollars for this arena completely saps our ability to get the things our community needs,” said John Jacoby, vice president of the Prairie District Neighborhood Alliance. “These are public dollars and they should be answerable to the public.”

The planned facility borders the Prairie Avenue Historical District, a city landmark and the site of the Battle of Fort Dearborn that later became a fashionable neighborhood following the Great Chicago Fire.

The city has argued that the facility will create thousands of jobs–both temporarily for the building’s construction and permanently for its operation–and will serve as an economic jolt to the South Loop.

Other concerns include traffic, loading areas -- McPier assures they will be underground -- noise and light pollution, and space issues.

“This is a monumental hotel and a 10,000-seat arena that’s being thrown smack-dab in one city block,” Jacoby said.

Reilly said that even with the chosen design, there would still be more opportunities for community engagement and tweaking.

“There’s still some nuts and bolts to work out,” Reilly said.

Jacoby criticized the city’s attempts to involve the community with “innocuous details,” such as preferred restaurant types.

“It’s great to be called into a meeting and see models, but it’s the nuts and bolts that really need to be explained.”

Another point of concern has been the profitability of DePaul basketball games. The discrepancy between attendance estimates for the event center and DePaul’s actual attendance for home games over the past years has been widely reported. In May, Crain’s reported that DePaul would have to more than triple its annual attendance to meet the estimates made by McPier. 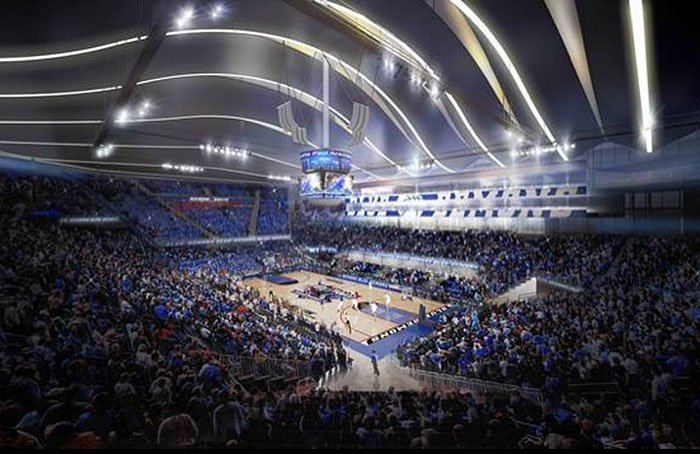 A rendering of what the interior of the new arena could look like. (Courtesy/Pelli Clarke Pelli Architects)