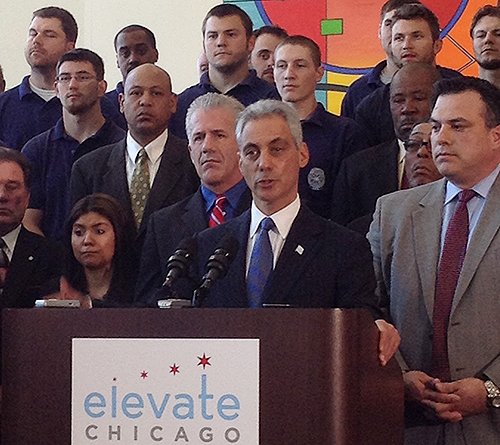 Mayor Rahm Emanuel talked about the long-term benefits the arena would have on the city.
(Photo/Josclynn Brandon)

Mayor Rahm Emanuel introduced a plan Thursday to build a state-of-the-art $300 million tourism and tradeshow event center near McCormick Place in Chicago’s South Loop neighborhood -- with a new DePaul basketball arena at the heart of it.

The 10,000-seat facility -- which would cost more than $140 million for the arena itself -- will be the new home of the Blue Demon men’s and women’s basketball teams.

“I’ve made it a priority to make sure that Chicago’s convention and tourism industry is no longer second and no longer losing jobs and starting to add jobs,” Emanuel. said. “The city of Chicago, because of series of challenges was actually beginning to lose its place in the convention industry to Las Vegas and Orlando.”

With Chicago media, DePaul officials and McCormick Place employees on hand, Emanuel and Metropolitan Pier and Exposition Authority CEO Jim Reilly explained that the new center would play host to many events that will draw business to the South Loop neighborhood, helping fill hotel rooms in the area.

The total cost of the arena will be equally shared by MPEA and DePaul, given each use as a public and private facility. DePaul’s participation will allow MPEA revenues to be invested in other aspects of the District, such as Navy Pier.

The site of the planned events center will be north of Cermak Road between Indiana and Prairie avenues. Construction of the facility looks to begin in 2014 and is expected to open during the 2016-2017 basketball season.

DePaul will contribute $70 million for design and arena construction. The Metropolitan Pier and Exposition Authority will contribute the other $70 million along with $33 million in tax increment financing funds to cover costs of the land. That brings the total cost of the arena to $173 million, including land costs. The remainder of the $300 million budget goes for two hotels and other development at McCormick.

The project is part of a larger $1.1 billion project designed to revitalize Navy Pier, the historic Motor Row and nearby South Loop neighborhoods, and will include a boutique hotel at the arena and a nearby, 1,200-room headquarters hotel.

DePaul's president, Father Dennis Holtschneider, said the school considered as many as 12 other properties around the city closer to the Lincoln Park campus to build an arena. One of the many speculated venues was the United Center, where the Chicago Bulls and Blackhawks play. Although widely reported that DePaul would get free rent for 10 years at the United Center, Holtschneider said at Thursday's press conference that was not true.

With dates and time being an issue, Holtschneider put that idea to rest by saying the deal would have required DePaul to pay significant operating expenses in order to use the United Center.

“We’ve always said at DePaul, ‘We don’t need an arena for that many days of the year,’”  he said. “This becomes a way where we can actually afford to do this without raising tuition.”

Since 1980, DePaul has played at the Allstate Arena in Rosemont, more than 15 miles from the school's Lincoln Park campus. Attendance has waned as the team has struggled in the past several years, and students must ride a shuttle bus to get to the games. Now, they can take public transportation to the South Loop arena, something DePaul officials applauded at their press conference.
Athletic Director Jean Lenti Ponsetto said student access to the arena was critical in choosing a location. Although DePaul considered locations such as the old Morton Salt factory off Elston Avenue, just blocks west of the Lincoln Park campus, officials went with McCormick Place because of its proximity to public transportation and the ability to share building costs
"We were very conscious about looking at pieces of property that were along the Red Line," Ponsetto said, "because that runs from our Lincoln Park campus and our downtown campus." 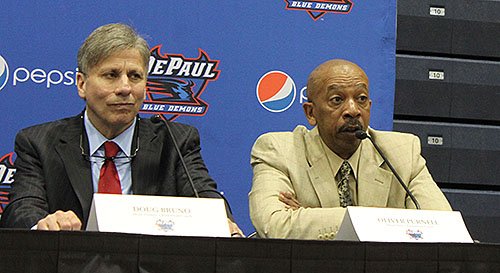 The new arena will bring the men’s basketball program back to the city of Chicago, helping the program reach an equal playing field with its competitors in the newly revamped Big East Conference. It will provide the men’s and women’s basketball teams with first-class facilities that will help attract young recruits, men's basketball coach Oliver Purnell said.

"Having a first-class, top-notch arena, along with the re-alignment of the Big East -- it's already starting to affect our recruiting," Purnell said. "One of the things I hear from people is 'Boy, if you only played in Chicago,'
"I can tell you already in talking about the possibility of building a place, has already helped in ... recruiting Chicago-area players."
Purnell and women's basketball coach Doug Bruno hope the new arena will help them with recruiting leverage in the city. Not since the days of Quentin Richardson (Whitney Young) and Bobby Simmons (Simeon) in the late 1990s has the program had local prep stars lead the program to the NCAA tournament.


"I've been dreaming about this day since they day I stepped on this campus," Purnell said. "But it's really just a dream that we will now be playing in a good, full-court environment and we will be back in the city.
"It's our goal here to have a top-notch men's basketball program. I really believe that this is the next best step."
But DePaul could have some company in its new arena.
During his Thursday morning press conference, Emanuel said another area college team has expressed interest in playing in the arena, where DePaul will be a long-term tenant and not a part owner.
“There’s a bright future if you’re willing to shape it and not be shaped by it,” Emanuel. said. “I’m proud that we’re building our future.”
Angelica Robinson and Josclynn Brandon contributed to this story.