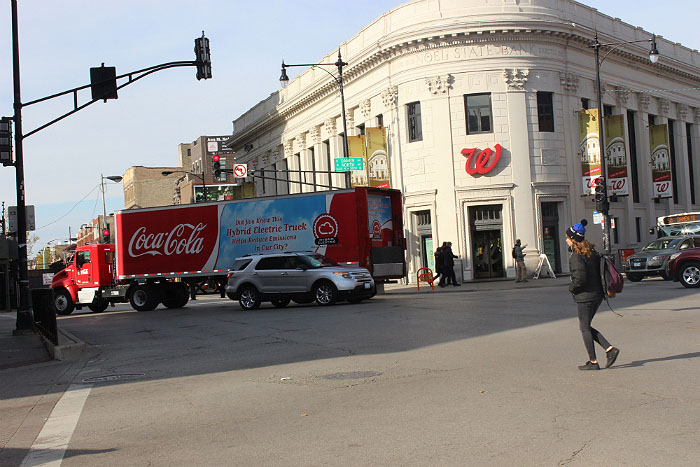 A few weeks ago, Austin residents Jennie Burkhalter and Tony Armstrong witnessed a friend get badly injured after being struck by a car near Chicago Avenue and Cicero Avenue.

Their friend, a black man wearing all black clothing, ran across the street where there was no crosswalk, according to Burkhalter, 51, who has lived in Austin since the early ’90s.

Chicago Avenue and Cicero Avenue is the second most dangerous intersection in the city, according to nonprofit advocacy organization Active Transportation Alliance.

In the middle of October, the group released a safety statistics report, which included a ranked list of the city’s most dangerous intersections.

Using the number of reported crashes, feedback from their community outreach team and 800 responses from an online survey, the organization determined that North Avenue, Milwaukee Avenue and Damen Avenue in Wicker Park is the most dangerous intersection in the city; Chicago Avenue and Cicero Avenue in Austin is the second most dangerous and Halsted Street, Lincoln Avenue and Fullerton Avenue in Lincoln Park is the third.

According to DePaul University professor Joe Schwieterman, Chicago’s wide streets are both a blessing and a curse.

“They really allow traffic to move swiftly but they can be a nightmare from a safety standpoint,” said Schwieterman, who has been studying transportation for 30 years. “When pedestrians cross some of these busy intersections, it can be harrowing.”

Six-way intersections, commonly referred to as “six corners,” have “long been a thorn in Chicago’s side,” Schwieterman said, adding that people get impatient because stoplight waits are long.

“[People] tend to force their way through the cycle of stop lights,” he said. “Motorists also get confused about turn lanes and make last minute changes to their routes as they’re confronted with all of these different options.”

Damani Anderson, 41, has worked at Wicker Park shoe store City Soles, 2001 W. North Ave., for the past seven years. The store sits at the corner of North, Milwaukee and Damen avenues.

In the time Anderson has worked there, she said she’s seen at least two accidents at the intersection.

Around three years ago, Anderson saw a car hit someone riding a bike through the intersection; several years ago, she saw two cars collide.

“It has nothing to do with people going out to dinner or partying,” said Anderson, who is the assistant manager at City Soles. “It’s people going to work. People are so preoccupied with getting to work on time.”

According to ATA’s analysis, the intersection has seen 43 reported crashes involving a pedestrian or a bicyclist over a six-year period from 2006 to 2012.

Anderson also points to the fact that Wicker Park has become “one of the biggest areas in the city for tourism,” which means there are more people coming and going, causing more traffic.

She said she sees a lot of people in a hurry on their way to the Blue line train station at Damen Avenue; the blue line is the only train that travels directly to international transportation hub, O’Hare Airport.

Abby Ham, 22, lives off of North Avenue in Wicker Park.

A regular cyclist, Ham said she is “absolutely not surprised” that the six-way intersection tops the list.

“I bike around here, and no one gives a sh**,” Ham said while waiting for the Milwaukee bus at the six-way intersection. “No one uses turn signals at all.”

Schwieterman said the six-way intersection at Halsted Street, Lincoln Avenue and Fullerton Avenue is similar to the Wicker Park intersection in that it’s also plagued with “incredibly heavy traffic.”

The Lincoln Park intersection had 37 reported crashes involving a pedestrian or bicyclist over a six-year period from 2006 to 2012, which makes it the third most dangerous intersection, according to ATA’s analysis.

“The only way to solve [traffic problems] is to put up no turning signs but that creates other problems so we live with the consequences,” Schwieterman said.

But Chicago Avenue and Cicero Avenue in Austin is not a six-way intersection, and it comes in at number two with 38 reported crashed from 2006 to 2012.

When asked why that might be, Schwieterman said: “It’s a non-transit friendly part of the city so the motorist is king.”

He added: “You mix that with a lot of congestion and you have a recipe for problems.”

For Burkhalter, it’s not the intersection itself that’s the problem.

“It’s not the corner, it’s the people being dangerous,” said Burkhalter.

She added: “It’s people being careless. I don’t sell drugs; I sell cigarettes. The police [are] more on me selling cigarettes than they’re on people drinking and driving.”

Burkhalter currently lives a couple blocks from the intersection, but she used to live on Cicero Avenue at Chicago Avenue. There, she saw “a whole lot of accidents outside of [her] window.”

Examining high-risk intersections is important, considering 80 percent of fatal and serious pedestrian crashes occurred within 125 feet of an intersection, according to ATA’s report.

“Much of the city is within 125 feet of an intersection since we have small blocks,” according to Schwieterman.

“It’s a sad fact of life that in many neighborhoods you’re unlikely to get caught if you get a pedestrian and leave the scene,” Schwieterman said. “In the poor neighborhoods it’s often at it’s worst because there’s often a culture of crime and a sense that encountering a policeman will lead to more problems so they flee the situation.”

While city officials can’t control people who decide to leave the scene of an accident, they can try and calm traffic in certain areas. And by identifying which intersections present the highest risk, the city knows where to channel its resources.

Schwieterman said the city has an “ambitious plan” to slow down traffic, including adding more speed bumps and raised medians as well as improving red light cameras.

The 10 Most Dangerous Intersections

Based upon analysis of crash data, staff feedback and more than 800 suggestions from the general public, the Active Transportation alliance selected the following 10 intersections as focus areas for its Safe Crossings campaign in Chicago: