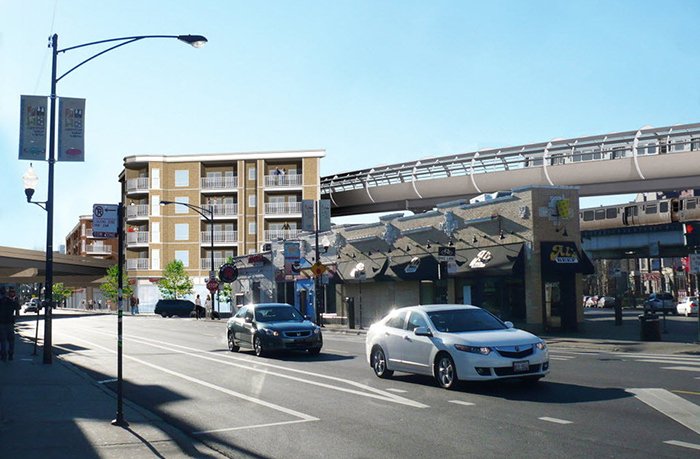 A rendering of the Belmont flyover. (Rendering courtesy of CTA)

More than 100 people filed in to the 19th District Police Department in Wrigleyville Thursday night for a hearing on CTA’s proposal to create a flyover rail bypass near Belmont Avenue.

This was the second hearing CTA held to gather public comments and feedback before moving forward with phase one of a major rail revamp dubbed “Red-Purple Modernization.”

The planned flyover received harsh criticism from some Lakeview residents, like Bob Hughes, who said the bypass would “block out the sky and totally destroy the neighborhood.”

Hughes lives on Wilton Avenue, just across the street from the flyover’s proposed location. The longtime Lakeview resident strongly opposes the CTA’s rail bypass proposal, calling it “unnecessary” and “destructive.”

CTA’s plans would require the city to forcibly purchase and subsequently demolish 16 buildings to make way for the new Belmont bypass.

CTA says the bypass is a necessary renovation that would ease bottleneck traffic at a nearby rail interchange where Red, Purple and Brown Line trains frequently encounter delays waiting for one another to pass.

The bypass would create a separate, nearby elevated track bed for Brown Line trains, eliminating the bottleneck problem, the CTA says. The flyover would be 40 to 45 feet at its highest and would increase overall rider capacity by 30 percent for all three rail lines, the CTA says.

Hughes said the slight time and space benefits created by the bypass aren’t worth the high cost to community stakeholders, who would either be displaced or forced to live with a noisy eyesore looming 40-plus feet high. 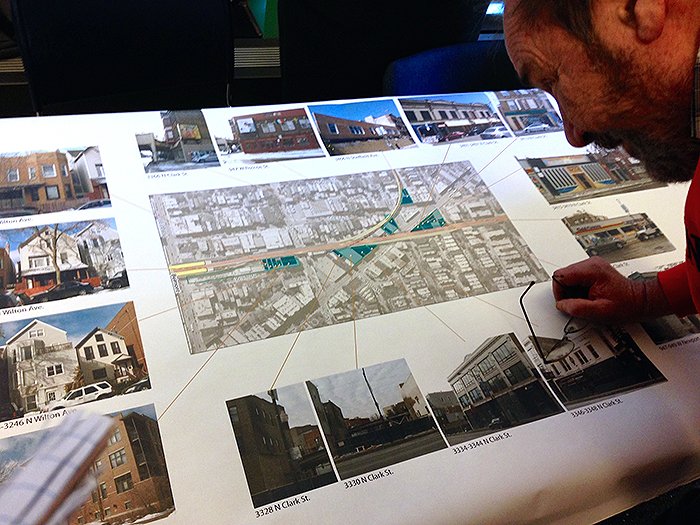 The 16 buildings highlighted in green [center image] would be forcibly purchased to make way for the new Belmont bypass. (Photo/Emily Brosious)

John Johnson, a block leader and member of Lakeview Neighbors Association agreed with Hughes assessment of the planned bypass. His association drafted its own alternative proposal for an underground subway bypass rather than a raised flyover.

“I’m worried about noise pollution and loss of the community’s local character,” Johnson said at Thursday’s meeting. “This subway bypass would alleviate bottleneck traffic on the North Side without destroying the neighborhood.”

Homeowner Mathew Duggan isn’t entirely comfortable with the idea of forcing people out of their homes and businesses under eminent domain. But he also sees the logic in CTA’s proposal.

Duggan said he was still weighing the pros and cons and hadn’t come to a decision either way yet.

“It’s and old neighborhood with a lot of locally owned businesses, and that’s a good thing. The bypass would change that,” Duggan said. “But I see the logic behind CTA’s project. The system is old and needs upgrades. It makes sense.”

Duggan said he was mostly worried about construction time and costs.

“The CTA rarely finishes projects on time and tends to go over budget,” he said.

One supporter with no qualms about the planned bypass at the CTA’s open house meeting was Harold Washington College student and frequent El rider Charles Papanek. He strongly supports the CTA’s planned bypass and public transit investment as a whole.

Papanek said this upgrade is important for the future of Chicago’s public transit system. Opponents are acting out of “misguided backlash,” he said.

“Their objections are about visual appeal and suspected corruption issues. It’s not about the transit,” Papanek said. “This is a good project getting caught in the crossfires.”

Papanek said he is frequently impacted by delays at the bottleneck interchange, though his support for the bypass project is about more than his own commute.

“It might sound cheesy,” Papanek said, “but this is about the greater good …This is about investing in efficient public transit. It’s about creating a system where people aren’t reliant on automobiles.” 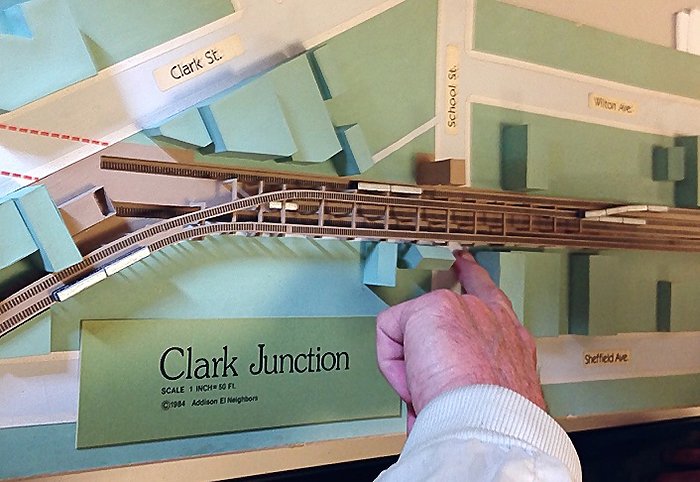 Lakeview Neighbors Association displayed an alternate bypass proposal to create a subway bypass instead of the flyover. (Photo/Emily Brosious)