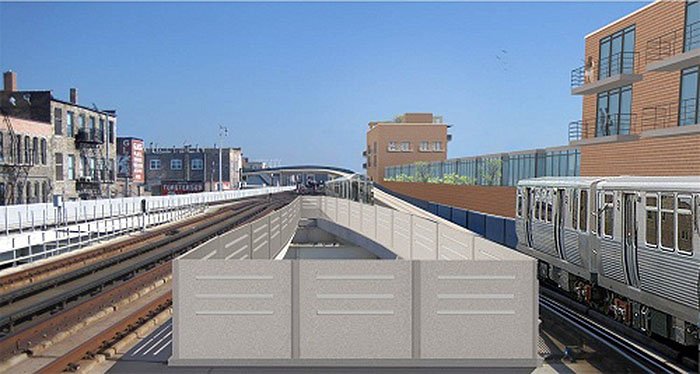 Rendering of what the Red-Purple Bypass could look like. (CTA photo)

The Chicago Transit Authority is moving forward with projects that will affect the Brown, Purple and North Side Red Lines and is currently soliciting customer feedback to the plans.

An open house meeting was hosted by CTA on May 21 at Harry S. Truman College, just west of the Wilson Red Line stop, for the public to learn about the early plans for phase one of its Red and Purple Modernization project, which includes the Lawrence to Bryn Mawr Modernization Project and the Red-Purple Bypass Project.

Customers and residents attended the meeting to read presentation boards, have their questions answered by approximately 20 CTA representatives and submit feedback on comment cards.

The first project intends to modernize the Lawrence, Argyle, Berwyn and Bryn Mawr Red Line stations, which were all built in the 1920s. Platforms would be widened from a 12 to 24 feet wide, elevators would be added, and amenities like benches and wind screens would be built on the platforms. Additionally, track improvements would be made between stations to make rides smoother and quicker for customers.

The Red-Purple Bypass Project would aim to reduce delays just north of the Belmont station, where northbound Brown Line trains currently have to cross the tracks of both northbound and southbound Purple and Red Line trains. This can cause delays of several minutes for up to four trains at once as they wait for signal clearance. The CTA said that as many as 150,000 customers use this station daily.

CTA media relations representative Tammy Chase said the current track setup “is like if on the Eisenhower [expressway] there was one lane that just suddenly crossed all other lanes to turn, and all other lanes had to wait for that single lane.”

The project would send the northbound Brown Line train on its own dedicated track, which would jut slightly to the east before crossing over the other tracks at an elevation of roughly 45 feet.

“We’re basically at capacity for number of trains [that can currently be on the Red Line],” Chase said. “And we do not expect that ridership will remain the same. Trains will continue to become more and more packed, and some riders will stop taking the train. That affects the quality of life in Chicago.”

CTA chief of capital construction financials Leah Mooney said that the Red-Purple Bypass Project could add as many as eight additional Brown Line trains and nine Red Line trains per hour because of reduced delays.

Current estimates for the cost of the two projects would be a total $1.7 billion. Michael McLaughlin, CTA vice president of planning and federal affairs, said that a little less than half of that would come from federal funding because of the Federal Public Transportation Act of 2012, while the rest would come from state and local sources. He said that “local” funding could come from a number of places—private investors, Cook County or the city of Chicago—but that is a way from being determined.

“It’s quite customary to think about the local funding now,” McLaughlin said. “But to line it up in a couple of years.”

The most common pushback from customers and residents had been from those living near the tracks whose properties would be impacted. Nineteen total buildings, 16 for the Red-Purple Bypass and three for modernization at Lawrence and Bryn Mawr, would have to be acquired by CTA to complete the projects. Residents and business owners would have to move their homes or businesses, but they would be paid fair market value or the original purchase price of their property, per the Uniform Relocation Assistance and Real Property Acquisition Policies Act.

Over the next year, the CTA will conduct an environmental assessment to qualify for federal funding. It will also be looking into ways to minimize the time and noise of construction, as well as the potential noise of faster and more frequent trains.

Construction for the projects would begin in 2017 and will take an estimated three to four years to complete.