Each year, more and more students enroll in public charter schools and leave their public schools behind – both nationally and in Chicago.

Communities are impacted as more options are made available with the creation of new schools, and as resources are divided. And Chicago has been no exception.

While there are additional variables in the broader picture such as students who leave the city to attend school in the suburbs —charter schools are growing and public schools are losing students within the city.

Nationally, from 2000 to 2016, charter schools rose from 2% of all U.S. schools to 7%, according to the National Center for Education Statistics.

“Charter schools are traditionally owned by Investors or corporations,”said Ald. Susan Sadlowksi Garza (10th Ward), who worked as a CPS elementary school counselor for 40 years. “They operate and receive funding from the states in which they operate. They pay their teachers less money than non charters and don't give a lot of money for supplies/computers and educational materials. So the corporations/ owners turn a profit.”

Chicago native Bobbi Macdonald created a charter school system in Baltimore called City Neighbors Foundation that operates three schools. She said charter and public schools are fundamentally different in the two states but she was able to comment about the politicization over the educational trend.

In 2011, City Neighbors claimed one of the highest attendances of any non entrance criteria high school in Baltimore. Macdonald focused on a collaboration with students and the community to foster personalized education and creative solutions at a time when she sought schools for her children to attend.

In Chicago, a significant shift occurred in 2014 when CPS adopted a system-wide Student Based Budgeting model to determine each school’s budget. While CPS argues this budgeting is beneficial, it appears that schools located in communities of color are not benefiting from this new system. Consequently, charter schools tend to cluster in these same neighborhoods.

These communities of color are now seeing a decrease in the enrollment of students in their neighborhood schools – many of which have served as pillars in their communities for years. Many schools have closed since the policy shift and more may continue to close on account of funding and reorganization.

“This school choice program said it was going to give students and parents choice, by offering a bigger menu of schools,” said Stephanie Farmer, a sociology professor at Roosevelt University who recently appeared on the podcast CTU Speaks!. Farmer recently studied SBB and spoke about her research .

“You have selective enrollment, gifted, career academy, STEM programs, and charter schools ... and when they began rolling out these schools in areas where they were losing population, swift declines of population," she said. "62% of these charter schools are in communities with a 25% or higher decline in population, so that becomes the context in which you now have under enrolled neighborhood schools."

This was the case for Humboldt Park, whose Lafayette Middle School was turned into a private selective enrollment school in 2014, as a result of low enrollment.

“Closing Lafayette will kill our neighborhood and our families,” Rousemary Vega said in an interview with CBS.

CPS enrollment has historically been predominantly people of color. As of 2018 more than 85% of their students were either African American or Hispanic.

CPS has lost about 11% of its African American students.

Daniel Alvarez, an assistant principal at Jane Addams Elementary School in Palatine, said student based budgeting impacts students outside of the classroom, too.

“I would say the biggest flaw (in CPS) is that there is no real pathway for students who need immediate social services. This is more of a district flaw than our school,” he said.

Many neighborhood schools that are dealing with enrollment issues find themselves in very similar situations. They are forced to prioritize certain staff, leaving their students without social services.

“Principal choices come down to whether the school should have a librarian or a PE teacher,” she said. “The only schools with increased funding as a result of SBB are overcrowded and have too many students per classroom.”

These now underfunded or overcrowded schools are most likely going to continue seeing a decrease in their enrollments. Which may eventually lead to their school getting closed down.

Others have advocated for charter schools in their right and ability to receive an equal amount of funding. “A charter school needs to have control of its own finances to run efficiently,” reads a statement from The Center for Education Reform.

The statement also encouraged that charter schools can offer outside support to their student bodies that encourage enrollment, private funding, and consequently affect the already underfunded CPS, like social services.

These social services can include counseling, school nurses, and all positions outside of direct educators. These assets to a schooling system are essential to low-income and minority based schools such as Southside CPS schools.

It appears as if charter schools are encouraging  students from CPS into their schools, leaving their neighborhood school starved of resources. SBB was intended to make budgeting equal across all schools, yet it may be one of the reasons why CPS enrollment has decreased.

Sadlowksi Garza added that aldermen are often left powerless when advocating for resources or changes regarding CPS in their wards.

“I can lobby for things at particular schools but I don't have a direct say in CPS funding,” she said. “But yes, there is a disparity. Northside schools have things that the South Side and West Side schools don't have. Full computer labs...science labs access to programs. The quality of your education shouldn’t depend on your ZIP code. Every school should receive funding based on their needs.”

Garza has argued for better resources at George Washington High School, of the 10th Ward, which received a new roof and science lab.

Some experts say it is clear that student-based budgeting is not an effective system for Chicago or its schools. Chicago, unlike most cities, has clear racial boundaries across its communities.

“Charter Management Organizations run these schools in a way that is beneficial to them, not in the interests of the students,” Caref said. 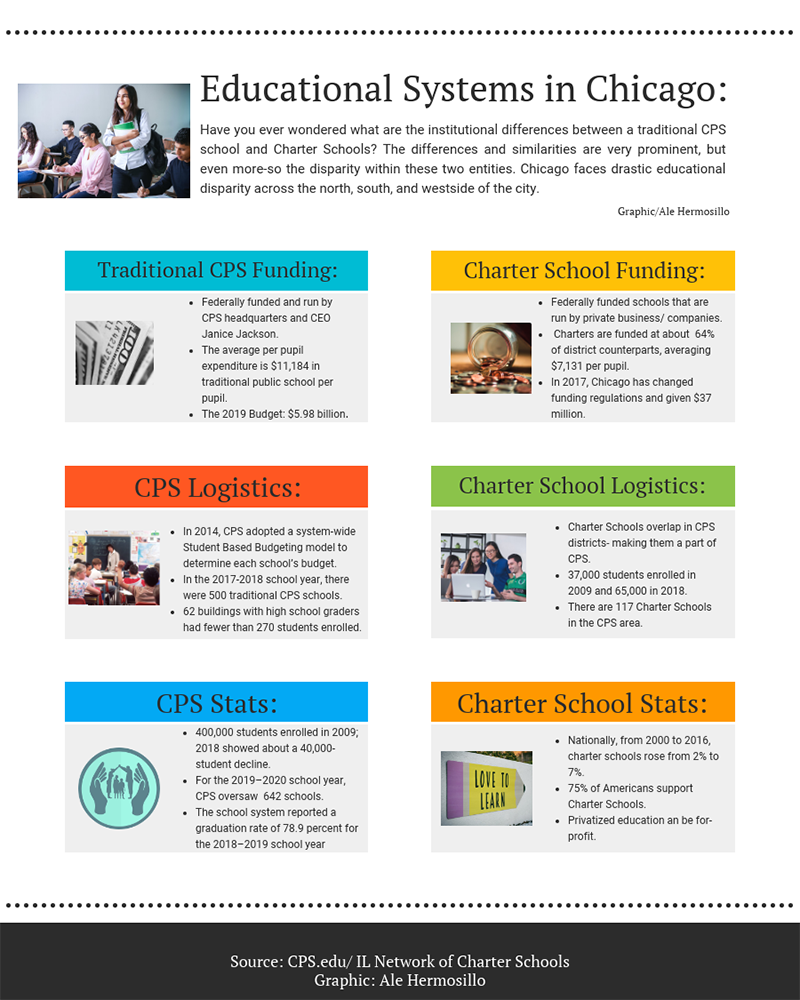