Where to Find the Coolest Street Art in Chicago, Suburbs

By Maddie Rose and Cristina McGraw | 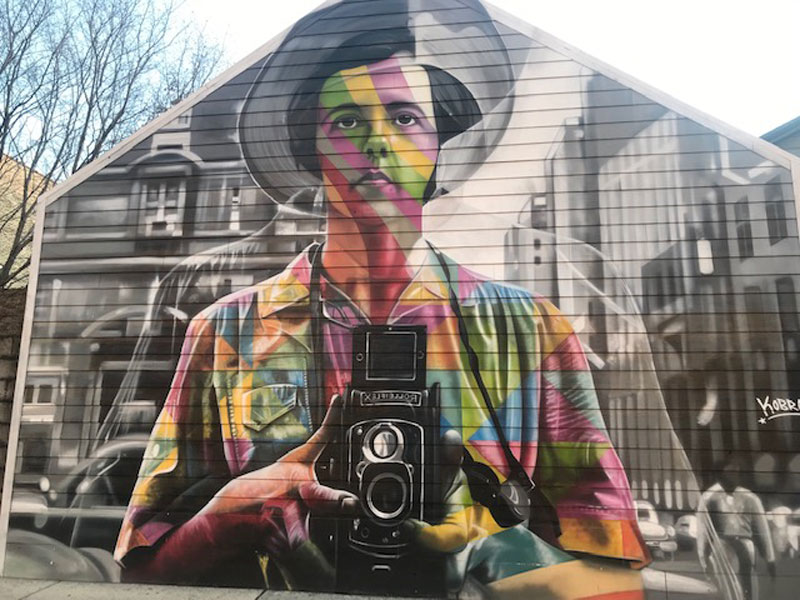 This Wicker Park mural is a tribute to one of Chicago’s most famous photographers, Vivian Maier. (Photo/Maddie Rose)

Marty Rose, an amateur artist in Chicago, explained what it takes to create a mural. Since he has been doing art his whole life, he can easily walk through the process.

“First I sketch a couple of designs for the client to choose from and then visualize it against the walls,” he said. “The only time I sketch it on the wall ahead of time is when it involved lettering so that it is spaced perfectly. The actual designs or illustrations are freehand.”

Many times artists are contacted by local businesses to make certain pieces for them. But sometimes muralists seek out their own places and use their designs.

As someone who is asked to do murals for businesses and clients, Rose was asked what work he has done in the past. Many of the works that he has done range from fantasy subjects for children’s rooms to the beautiful views of Tuscany scenery. Even some paintings as detailed as a tree spanning across a laundry room wall up to the ceiling with birds flying across the branches.

Artists like Rose are an example of one of the many amazing street artists in the Chicagoland area. The city and suburbs have many beautiful murals and cool street artwork.

Street art pieces are essentially created by artists in a public setting for everyone to see and engage with. The artist is usually trying to make a statement through public work.

A look at some of the cool artwork in the Chicagoland area:

StoryMap: Check out the location of the five murals

This piece is created by artist Ester Melina Scotte. She was born and raised in Argentina and began her artistic journey at the young age of 12. She acquired a lot of her artistic technique through combination of art school as well as her own personal development. She enjoys experimenting with various techniques and styles.

She said she “expresses her own world, vision, and personal emotions throughout different stages of her life through her paintings which are influenced by her own personal travels which allowed her to also travel through her art as well."

Her mural Butterflies Breaking Through the Clothes is located in Oak Park. She said the first step in creating the mural is to propose the specific art piece to the city, then showcase her idea or outline for approval prior. Once they approve the concept, she then begins outlining or creating the actual piece.

For this piece, she used a projector to sketch the shape to the murals, she added a combination of acrylic paints, finishing with graffiti varnish. The mural took about three days to complete with a total of 16 hours. When asked about some of the challenges of creating this type of artwork, she replied that the weather is a huge factor, especially in the Midwest.

When asked about the connotation of the painting, Scotte said “that it is about what we transmit and what we release to others through our energy in the shape of butterflies, that come from the inside and surround the women.”

She dedicated the mural to every person who enjoys viewing art, and called it her “small contribution to motivate others to leave more art on walls."

This piece is a mural by artist Hebru Brantley, a Bronzeville native. The artist said his work draws influence from pop culture, comic book heroes, as well as Japanese anime and bold aesthetics. He earned his B.A in film from Clark Atlanta University, with a background in design and media illustration. In his bio he describes that he uses the family of murals and graffiti work as a frame to explore his inquiries.

Brantley applies a “plethora of mediums from oil, acrylic, watercolor and spray paint to non-traditional mediums such as coffee and tea, as well as challenging the traditional view of the hero or protagonist”

The mural is located in West Town, Chicago. Which depicts his iconic character of the FlyBoy. He currently has an exhibition in Pilsen called the Flyboy Universe in NevermorePark.

This piece is by Puerto Rican native and Chicago resident JC Rivera. Rivera said he’s been illustrating, painting and doing anything related to art for the past nine years. His most popular trademark is the iconic Bear Champ, a yellow bear with boxing gloves seen in many Chicago neighborhoods. The specific mural is located at the West Loop Neighborhood, and depicts the Bear Champ holding a large slice of pizza.

College student and Chicago resident Kerenina Rosario Rivera’s Bear Champ is "becoming a Chicago symbol, kinda like the Bean but in a more underground way.” She explained that as a fellow Puerto Rican she feels proud to see their Boricua representation through his artwork.

This mural is done by Eduardo Kobra, a Brazillian street artist. This mural is dedicated to one of Chicago’s most famous photographers, Vivian Maier. It is located on the wall of a house in Wicker Park at 1651 W. North Ave.

Kobra is known for his use of bright colors and bold lines that give his murals a kaleidoscope feeling to them. The technique he uses consists of repeating squares and triangles to give the image he is painting that realistic touch.

Kobra made this piece when he got permission from the owners of the house to paint the mural. He was not paid to do this mural, instead he volunteered his time and used his own money to create this work to pay tribute to Maier.

Maier is considered one of the greatest photographers of all time. Before her death in 2009, Maier lived in Rogers Park and captured countless images of life in Chicago and the people who lived there.

The mural by Kobra is one of her self portraits that she took, where she is seen holding up her camera.

Eduardo Kobra brought to life one of Chicago’s most famous icons. Getting to drive past this mural that not only celebrates Vivian, but also the hard work done by Eduardo himself is a real treat.

5. Greetings From Chicago, by Victor Ving

This mural is called Greetings From Chicago, located in Logan Square. Painted back in 2015, it has been one of Chicago’s favorite tourist attractions. The mural captures the highlights of life in Chicago.

Muralist Victor Ving and photographer Lisa Beggs started a journey of traveling to different cities and creating what is called the Greetings Tour. As a group project the two have been using the classic large letter postcards and turning them into art.

Capturing the essence of each city they travel to, they create these murals inspired by the old large letter postcards back in the early 1990s.

The two have made 41 murals in 20 different states during the past four years of creating landmarks. They intend to make one in all 50 states.

The mural in Chicago includes a very colorful and fun image to depict some of Chicago’s most iconic symbols. It features some of Chicago's best within each letter including Chicago hot dogs, White Sox, Ferris Bueller, and many more.

Right off the California stop on the Blue Line, one can see the mural and its friendly greeting to the public. It has become quite a popular stop to take pictures for all forms of social media. The painting can be found right against a plumbing building on the intersection of Milwaukee Avenue and Prindiville Street.

Photo bubble: 360 view of the artwork

Doing this type of work is very different from a typical canvas and paint supplies, Rose said. Murals are done on different surfaces and cause from many challenges when making it. Some of the biggest challenges is to include all the details to make the painting perfect.

Making sure that the art the artist is doing what they visioned may be one of the biggest challenges especially with the obstacle of time. When doing a piece for a business it may cause lots of dedicated time in order to get the piece done promptly.

Rose said it's hard to estimate how much he spends on his murals.

“Very hard to answer,” he said. “Every job is different. It all depends on the amount of detail a project needs. The more detail, the more time needed. I’ve completed most inside of an eight-hour day, but ave frequently required a few days to complete a single project.”

He said that creating a mural is a strategic process from many artists. Having the privilege to explore ideas of what you can create and portray your art in a city like Chicago is a dream for many artists. It can take years to become an established artist within such a place like the city.

Being able to know what goes into creating murals like the ones scattered around the various neighborhoods in Chicago can give insight into the world of making murals.

If you want to know how you can be a part of making art like Rose and the other muralists in Chicago visit the Chicago Artist Coalition.