By Brody Ford and Kate Perschke |

Illinois has lost congressional seats, electoral votes and federal funding after every census since 1930. But for Census 2020, the state is trying a new outreach model, and, based on results, it appears to be working.

At least 439 Illinois organizations or government entities have received grants for Census 2020. Instead of hiring many short-term workers as the census traditionally has, Illinois committed $29 million of state money to existing community orgs to engage in census outreach.

When considering additional funding from Cook County, Forefront/IL Count Me In, Secretary of State, and City of Chicago, a total of almost $35 million grants have been issued for Census 2020.

This is the highest per-resident investment of any state. This decision is based on the belief that existing organizations are trusted by their communities, and are better able to communicate the importance of the census.

The U.S. Census has traditionally struggled to reach a handful of populations, dubbed “hard-to-count.” This includes immigrants, the homeless, children under the age of five, college students, and those without internet access. Organizations which have received funding focus on one or more of these groups.

So far, Illinois is ranked 9th nationally in census response rates. Among the top 10 states, Illinois has the highest population, and is the most diverse.

In the midst of a pandemic, response rates are predictably low nationwide. Field operations are currently suspended, and response deadlines have been pushed back. With the introduction of an online response form, Census 2020 may be well-equipped to deal with difficulties presented by COVID-19.

“All of the response rates are, I think on average, 10% to 15% lower than they were in 2010. I mean, that's just to be expected, that's COVID,” said Kathleen Yang-Clayton, Co-Principal for University of Illinois at Chicago’s Census initiative. “The biggest change that makes it really hard to compare between 2010 and 2020 is that we did not have internet access in 2010 to fill out the census form… Would that 10% to 15% lower rate be even greater if we didn't have the internet?”

On the Ground with Arab American Family Services

“I say it in my sleep sometimes. I have dreams about the census.” -- Omar Al-Yafai 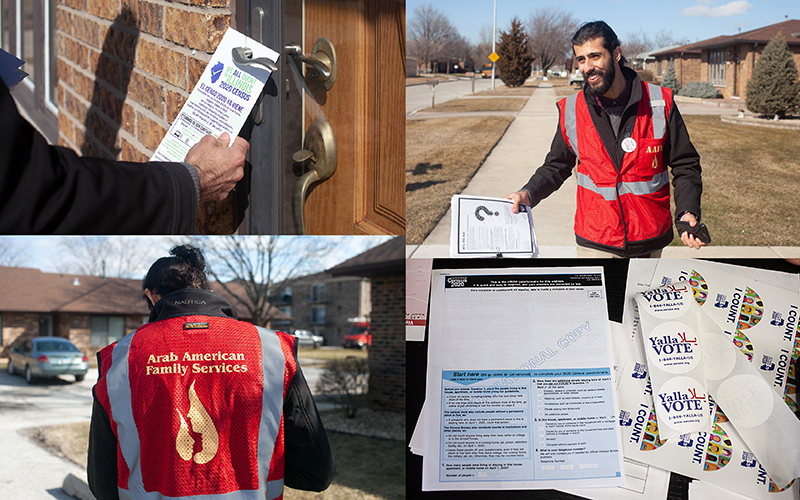 Omar Al-Yafai is a Census ambassador with Arab American Family Services (AAFS) in Worth, Illinois. He canvasses in the Southwest suburbs, reaching out to predominantly Arab communities, encouraging them to take the census.

AAFS is the recipient of five grants, from Cook County, Illinois Secretary of State, IL Count Me In (Forefront) and two from the Illinois Coalition for Immigrant and Refugee Rights. They’re in charge of areas that were drastically undercounted in the 2010 Census.

“There are billboards around, and flyers everywhere,” said Al-Yafai, referring to the multiple contacts it takes to ensure participation. “In different languages, the first time we talk to people, they don't know about it … then they see a billboard, and huh that looks familiar, then third attempt, then they have that idea.”

Before the Illinois Stay-At-Home order, a two-person team was able to knock about 100 doors a day. The calendar in their Census office was filled -- picnics, open houses, TV appearances -- all opportunities to spread word about how participating in the Census could help their community.

Now, the team has switched to phone banks and social media outreach. Through calls, each employee can reach as many as 200 people a day. Their planned comedy event for National Census Day, April 1, was replaced with a livestream by Al-Yafai, and a collaborative Tik-Tok video.

The name of the planned comedy night, “Do I Look White To You?,” is a reference to the fact that Arabs are demographically invisible on the Census. The lack of a MENA (Middle Eastern/North African) race option means that Arabs are counted as white in the 2020 Census. Rather than selecting “white,” AAFS is encouraging community members to mark “Other” and be specific about their ethnic or national origins.

Since census data is used for funding allocation and research, without a MENA box there is a lack of representation and funding for Middle-Eastern and North African communities. For Nareman Taha, Co-Founder of Arab American Family Services, 2020 Census outreach is a step toward getting this representation on the 2030 Census.

“We are very intentional to keep the conversation going. It affects our community, it affects our existence, our visibility, our power as a community ...  so we know for sure that at the end of the day, it doesn't stop June 30th. … our work is only as good if we have proof that we exist. And that's what we want to work towards in the next 10 years, is to show that we do exist.”

Taha expects a much better turnout in 2020 compared to 2010, because so many local organizations were brought on-board.

“It's probably the first time where grantees and organizations are not fighting each other, there was so much funding … Census wanted to make sure they covered all areas, all communities.”

The majority of Illinois’ $29 million census commitment was disbursed through Regional Intermediaries. These are established organizations which helped the Illinois Department of Human Services allocate funds, and manage outreach projects. 31 Regional Intermediaries assign census tracts and HTC populations to their pool of sub-recipients, divided into 12 regions.

Illinois Coalition for Immigrant and Refugee Rights is the single largest recipient of grant money. They’re in charge of allocating and managing $4.87 million of state funds to 66 sub-recipients.

“Folks on the ground know their communities best, and we need to follow their lead on how the message is communicated, so that we do the most to try to get all these hard to count populations to fill out the census,” said Viviana Barajas, census coordinator with the coalition.

Barajas oversees more than 20 sub-recipients mostly in the Collar Counties and suburbs. She believes that ICIRR was given so much responsibility in census outreach because of their long-standing relationship with immigrant communities of Chicagoland and local governments.

“Even if you don't specifically know what ICIRR does, a lot of people recognize our logo,” Barajas said. “To have a coalition like ICIRR that routinely does Know-your-rights workshops, and tries to teach people about Public Charge, to come and say, hey the census is important, it's very crucial for you to fill out yours, and to say that we condone you filling it out. For a lot of people within the undocumented community, that's a source of comfort.”

Each sub-recipient has a work plan that commits them to metrics — a certain number of doors knocked, phone numbers called, events attended. It’s common for them to go above and beyond.

“With some of the orgs that I oversee, their work plan says for them to only do, say, 120 flyers this month. But, I have some super overachiever orgs that are more concerned with the actual mission and the purpose of this project, where it's like, they're adamant about trying to get as many people to fill out the census, so they go above and beyond.”

With so many moving parts, it can be difficult to plan outreach, or quantify success as the work continues. For technical assistance in these departments, the State turned to the University of Illinois at Chicago.

UIC is both a Regional Intermediary and government partner in census outreach. The project is based out of the College of Urban Planning and Public Administration (CUPPA) with collaboration from the IDHS, the Urban Data Visualization Laboratory, and UIC students and faculty.

“As they were rolling out those contracts, they realized they needed a lot of technical assistance that they did not have inside the state. So, how do you work with census data, how would you visualize this? Training organizations around how they talk about the census and do door knocking and flyering and mailers, and phone-banking. All the technical things that you would need to know,” said Yang-Clayton, Director of Undergraduate studies at CUPPA, and co-principal for the census project.

Shreyas Shastri is a third-year Public Health major at UIC and a Census Ambassador. Shastri’s passion for the census stems from his major, where the core principle is equity. Upon learning about the project and its focus on hard-to-count populations, Shastri felt compelled to join.

Shastri’s role as an ambassador is to engage the student population at UIC, especially the Asian-American and Pacific Islander demographic.

“We have some really great organizations in Chicago, especially, for the Asian American community, who are trying to fight for more resources, more representation, but it often still falls short,” Shastri said. “The census is a tool that would automatically guarantee those things.”

The COVID-19 pandemic has altered planned outreach following Census Day, which was canceled due to the stay-at-home order in Illinois.

While in-person organizing is off the agenda, Shastri and the UIC team have transitioned to digital efforts to continue their work.

“Social media is one of the biggest ways we can still get the word out, even though we don’t have meetings and workshops in public places,” Shastri said. “You can still [send] flyers out, you can still have promotional materials, and we’re still doing a lot of work.”

The U.S. Census Bureau has considered the impact that the virus has caused on a national level, wanting to delay the count which would postpone the redrawing of districts and release of data to states, announced in a press release on April 13. The bureau suspended all fieldwork until June 1, announcing the count would conclude in October, and requested that lawmakers approve an extension of the original timeline by 120 days.

Discussions between the White House and the House Committee about the request have begun, however Steven Dillingham, Director of the Census Bureau, has not been allowed to be on the calls. This is not the first impact the Trump administration had on census efforts, having controversially pushed for a citizenship question in the summer. While the efforts were blocked by the Supreme Court, the fear was damaging in hard-to-count communities that consist of immigrants and undocumented persons.

The work is far from over, as many organizations continue to ease the public’s nerves and encourage them to be counted without the advantages of cultivating in person relationships and being on the ground.

As of April 28, Illinois has a 59.4% response rate with 50.9% of responses being completed online. Nationally, 54.3% of the population has responded.

Due to the outbreak of COVID-19, census efforts may seem bleak in comparison to the reality facing the country. But, to Barajas, now is more important a time than ever to fill out the census: “With everything going on with coronavirus, knowing how many people we have in communities will allow us to be better prepared for situations like this.”