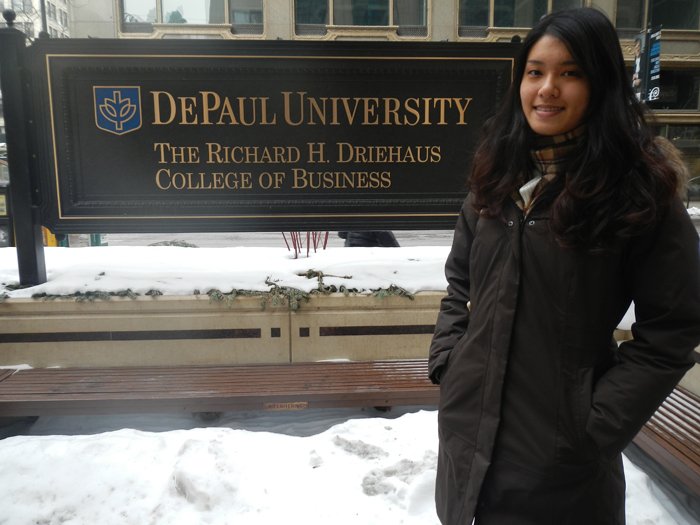 International Students Resourceful in Finding Ways to Study in U.S.

Yu-Ting Kung, 23, from Taiwan enrolled at DePaul’s Kellstadt’s Graduate School of Business in the fall quarter of 2013 with hopes of improving her English skills.

“Studying overseas gives me a better and higher chance of getting employment when I return home as I am able to speak English well,” Yu-Ting said. “And having accreditation from a higher institution in the U.S. will be a bonus to my resume.”

With the support of her family and two months later after receiving her Bachelors Degree in Geology Science from the National Taiwan University, Yu-Ting was on a 16-hour long flight to Chicago to start graduate school.

“Chicago is a big city, which to me meant there will be good opportunities for internships and maybe even a permanent job in future,” she said.

The number of international students moving to the United States in search of quality education continues to grow every year.

In  2012-13, this number reached a record high of 820,000 studying at U.S. universities and colleges, an increase by 7 percent from 586,000 in the last 10 years, the Institute of International Education reported. This means that international students now constitute 4 percent of the total U.S. higher education population.

For months leading up to the completion of her undergraduate studies in Taiwan, Yu-Ting worked with an agent in her country discussing university options and requirements that she would need to meet in terms of her TOEFL and GMAT scores – exams that are compulsory for prospective international students who wish to study in the U.S.

It was a long process but she was determined. Her options were narrowed down to universities in Chicago and she was delighted when she received an offer from DePaul. She enrolled in Marketing – something she had always been interested in pursuing.

“I had a few other options but my online research and strong recommendations from my agent stated that DePaul had a better reputation over the other schools that I had on my list,” Yu-Ting said. “So here I am.”

Although many international students are now entering the U.S. to study at the graduate level, those who come in to study at the undergraduate level still have the higher population. Sources of income for these international students also vary greatly. The IIE reported that 64 percent of primary source of income for these students come from personal and family funds, while 21 percent come from U.S. college or university, 9 percent from other sources and the remaining 7 percent comes from foreign government or university.

Yu-Ting is among the 64 percent of international students whose source of income come from family funds.

Makiko Hirano, 23, from Japan recently started her graduate program in Urban and Regional Planning at the University of California – Irvine. Like Yu-Ting Kung, Makiko’s primary source of income also comes from her family.

“The reasons behind making the decision to study in the U.S. instead of studying in Japan was mainly to help improve my English speaking and writing skills, have the opportunity to gain a global experience, and learn various peoples’ values since I would like to work in a global setting in future,” Makiko said.

“Maybe I will have a big advantage to find a job in Japan in terms of [knowing English better] because most Japanese cannot speak English well,” she said. “Some global companies would like to have people who have experienced overseas living and they will evaluate my challenge to undertake my masters program in the U.S.

However, she said this could go either ways as some big Japanese companies do not like people who are too intelligent as they might mess with their traditional ideologies.

“Education here [in the U.S.] is greatly different to that of Japan in terms of how students participate in classes and other activities. And this is an advantage for me,” she added.

According to data from the U.S. Department of Commerce, international students contributed over $24 billion to the U.S. economy in the 2012 and 2013 academic year, according to Special Reports: Economic Impact of International Students.

Dael Davila-Elguera, 26, is from Lima, Peru. He moved to Chicago in July 2012 to start his five-month English Program at Southern Illinois University. Unlike Makiko, Dael’s primary source of income comes from foreign government or university that makes up the remaining 7 percent of where primary funding for international students comes from.

"Education here [in the U.S.] is greatly different to that of Japan in terms of how students participate in classes and other activities. And this is an advantage for me."

Public Affairs Officer with the U.S. Embassy in Port Moresby, Papua New Guinea, Natalia Capel explained that the program is designed to increase mutual understanding between the people of the United States and the people of other countries.

“Fulbright scholars are chosen for their academic merit and leadership potential, and they have the opportunity to study, teach, conduct research, exchange ideas and contribute to finding solutions to shared international concerns,” Capel said.

For the 2013 fall quarter, DePaul University had also seen an increase in international student enrollment.

Sylmina Alkaff, 25, is a second year Biomedical Engineering Fulbright student at Northwestern University. She is from Indonesia. Before moving to the U.S. to study, Sylmina did her undergraduate studies at Sepuluh Nopember Institute of Technology for three years in Indonesia. She then transferred to Fontys Hogescholen in Holland to complete her final year of studies. She graduated in July 2010 and worked in safety systems with Yokogawa Europe B.V, a big electrical company in Holland over the course of two years.

Sylmina returned to Indonesia in July 2012 when she was offered the Fulbright Scholarship. She left for Chicago in September that same year to start her two-year program. Even though this was Sylmina’s first time to the U.S., her previous experiences in Holland had prepared her to have easy settlement into another country.

“One of my biggest challenges when I first moved to Chicago was to find accommodation. I was looking at affordability, locations and the amenities that were provided in those locations,” Sylmina said. “It’s difficult especially when you don’t know where to start from.”

Sylmina was happy when she finally found Granville Tower in North Sheridan. She found a roommate, another Fulbright student from Loyola University who had just started in the fall quarter and together they shared the rent costs for the 2-bedroom duplex apartment.

“The good thing about this place is that the $825 that each of us pays per month covers all other utilities provided so we don’t have to pay bills to different companies,” she said.

Sylmina is on a full scholarship where her airfares for the start and end of her program, tuition and monthly stipend of $1,690 are covered by the IIE. Like others who receive their monthly stipends, Sylmina breaks down this amount into rent, food, clothing, footwear, entertainment, other utilities and savings.  She is due to graduate in June 2014.

While Sylmina is working toward her graduation, Isaac Mejia, 25, from Guatemala had just enrolled in the Mechanical Engineering graduate program at the University of Illinois at Chicago. Isaac is also under IIE and has a monthly stipend of $1,500. Unlike Sylmina and Dael, Isaac lives on campus. His monthly budget sees him spend $1,250 on UIC dorm and dining hall services, with $200 divided evenly between entertainment, clothing and footwear.  The remaining $50 goes to eating out when he chooses to.

While meeting people in a different social environment besides his classmates is challenging for him, he wants to further his education and live an international experience.

“That is why I chose to study my masters,” Isaac said.

Prior to moving to the U.S. from Guatemala, Isaac worked with Grupo EBIS, an enterprise that sells cable and network equipment. He plans to work elsewhere or start up his own business upon completion of his studies in May 2015.

Although Isaac agreed that it is cheaper to live off campus, he still stays in the UIC dorms.

“The cost of learning to live in a foreign place, in this case, the U.S. is high,” Dael said. “Because we do not really know what to look for, and know the different costs, we just spend so much money. When we learn, we change for more affordable options. Sometimes we succeed, sometimes we don’t.”

Dael had switched from being under IIE to LASPAU when he completed his five-month English Program. While he was under IIE, he was receiving a monthly stipend of $1,100. At that time he rented a studio apartment at Carbondale for that period. He moved out of this place forfeiting his bond fee and moved into North Kenmore Avenue with a roommate to commence his 2-year graduate program.

“I liked my studio apartment but it was too noisy in the building. We had too many drunks and it wasn’t a conducive environment for me to study,” he said. “I am happy at my new place. My roommate and I share the rent, paying $550 each a month and then I spend around $200 for food and other utilities. My monthly stipend increased to $1,690 when I was transferred to LASPAU.”

"The cost of learning to live in a foreign place, in this case, the U.S., is high."

Dael is currently studying Public Policy at the graduate level at Loyola University. He graduates in December 2014. On his return home, he hopes to continue working in mining companies in social responsibility, enhancing public sector projects in his region.

Dael’s current contract with LASPAU requires him to pay for his own airfares to and from his home country when he finishes his program. He also has to pay for his own fares to return home during the summer as he is only eligible to study in the fall, winter and spring quarters.

Roger Fassinou, 30, is studying Computer Science at the graduate level at Loyola University. Roger is from Benin in West Africa and is one of two Fulbright Scholarship awardees. He lives in a studio apartment off campus and spends his monthly stipend of $1,690 from IIE on mainly rent and food, while he saves the rest.

Currently, Roger is among the best three from his home country.

“There are two of us on Fulbright Scholarship and one on Humphreys. It’s a big achievement for all of us,” said Roger. “It is not easy to get in but we made it. We are proud of this accomplishment. I acknowledge the Fulbright Commission for this wonderful opportunity – thank you.”