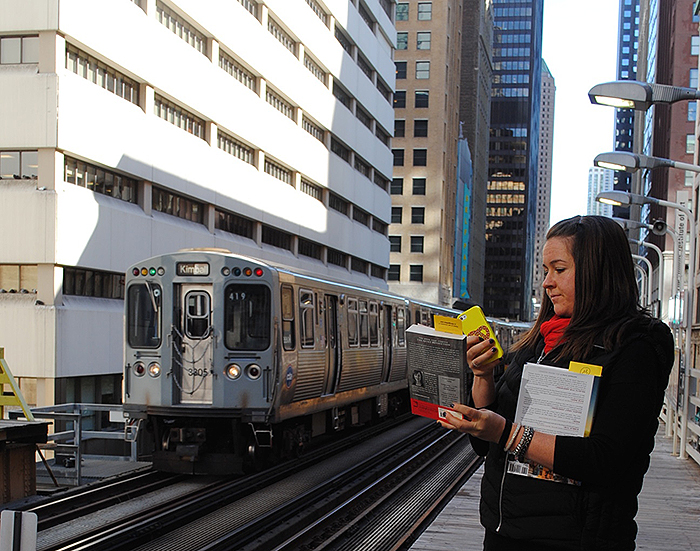 'Books on the L' Program Brings Literacy to the Masses

On most days, Anthony Ramirez takes the CTA Orange Line to the Purple Line to get to his job at Walgreens, just off the Chicago Brown/Purple Line station. On those trips, he never usually encounters anything out of the ordinary.

But on this particular day, Ramirez saw the book “The Happiness of Pursuit,” by Chris Guillebeau resting on a seat next to him on the El. A sticker on front cover that matched the color of his bright yellow Livestrong hooded sweatshirt caught his eye.

“The title was a sign maybe,” Ramirez said. “I went into the first part of the book and thought, ‘Yeah, maybe this could help me.’ I want to keep it, I want to read it. Maybe I can use it.”

Ramirez, a cancer survivor, found one of the thousands of books dropped off as part of Leo Burnett's “Books on the L” project. Every day members of the Chicago-based advertising firm drop books randomly on all eight El lines leading up to and perhaps beyond October’s Chicago Ideas Week celebration.

The minds behind the project hope commuters finding books will help spread ideas and knowledge throughout the city.

Ramirez said he doesn’t read much and usually picks his next book by catchy titles. But while searching through the first few pages of his latest find, he believed he found a new way to keep occupied during his train rides. He felt the book might be a source of inspiration.

“I think if the project worked for me, it will work for other people,” he said. “ I know I’ll keep an eye out for it now and tell people about it. So by word of mouth alone people are probably hearing about it.”

Books on the El and Beyond

Although this is the first year that Chicagoans are seeing random books on their train rides, the concept is far from new.

The idea can be traced back to 2012, where Holly Belton started the “Books on the Underground,” project, leaving publications around London’s public transit.

Since then, the idea was adopted in New York – “Books on the Subway,” – before Leo Burnett and Chicago Ideas Week put the plan to work earlier this month.

“It fits in with our general mission to spread ideas,” said Chicago Ideas Week managing editor Erin Robertson. “It’s great for people to find something on the El that’s such a positive initiative. It’s a really positive way to start or end your day.”

Along with finding a free book on the train, the program added some extra incentive. Some books contained special tickets that would get visitors free entry to select talks during Chicago Ideas Week.

So far the project is getting an array of feedback on social media through the hashtag, #BooksontheL. And it’s not just riders who push the ideas – publisher support is a key element to the success of the project.

All the books are donated by publishers, like Penguin and Harmony, or from Chicago-based nonprofit literacy advocate Open Books.

“It’s like a sampling program,” said Marie Roche, a strategist at Leo Burnett. “We want to get these books into the hands of people who wouldn’t normally take them.”

There’s some hinting that the project could continue on well beyond Chicago Ideas Week. Roche said there’s chatter about getting the program to go year-round. Leo Burnett is looking into a tracking system to see how many times a book is put back on the El or other transportation system.

“Imagine if a book that started out here ended up somewhere else in the country or across the sea in London,” said Leo Burnett book ambassador Bridget Kuehn.

Getting Them on the Trains

Kuehn and her coworkers each drop a few dozen books on the train every week. They say one of the best parts of the task is seeing the reactions of the people who pick the books up.

“I watched man on the Brown Line flip through the book, tuck it under his arm, smile and start reading it,” Kuehn said. “It’s a simple idea and that’s why it hooks people.”

About 40 book ambassadors go out to make drops every week. Ambassadors tend to leave books at the front of the train, where there are more open seats and less crowding.

It’s also easier to go in the middle of the workday so people won’t think they’ve accidentally left a book behind.

“It happened to a colleague of mine on the Blue Line,” Kuehn said laughing. “The girl tracked her down right to the platform to give the book back.”

And for those the project reaches, Kuehn knows a free book can go a long way.

“It’s about putting great ideas into action,” she said. “We want people to share aspects and gain knowledge. This is a great way to do it.”

What a novel idea! Found this book on the L. Gonna read it and leave it. @chicagoideas #BooksOnTheL pic.twitter.com/syDWTKPUs5

Video: How the Books on the L program got started. (Video/Marc Filippino)