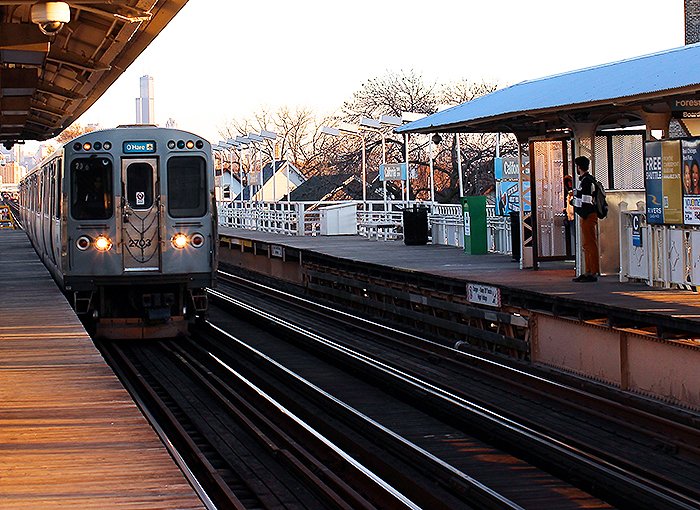 The modernization project, dubbed “Your New Blue,” will cut 10 minutes off travel times between O’Hare and downtown, officials said.

While there has been periodic construction on the O’Hare Blue Line for years, CTA officials said this project represents the most comprehensive investment for the line since it was extended from Jefferson Park to O’Hare in 1983.

Renovations will include complex signal work, power upgrades, track improvements and reduction of slow zones along the line. Upgrades to 13 stations and added 4G wireless internet infrastructures within subway tunnels are planned as well, officials said.

The first phase of O’Hare Blue Line renovations is expected to begin next year, with the entire project slated for completion in 2017, officials said. Exact construction schedules are still being finalized, but CTA officials said the plan is to begin track work first, followed by station renovations, power upgrades and then signal improvements.

“This Blue Line plan is far-reaching and long overdue, and will help meet increasing demand,” Emanuel said at a press conference Thursday. “It’s also part of our latest efforts to modernize our transit system for the 21st century.”

The O’Hare Blue Line serves around 80,000 passengers on a typical weekday, according to CTA statistics. Ridership between the Logan Square and Grand stations has risen 44 percent over the past five years, officials said. That makes it the fastest growing rail section within the entire CTA system.

CTA President Forest Claypool said “Your New Blue” is aiming for consistent speeds of 55 mph throughout the branch.

It should be noted that this is the same projected rail speed that former CTA President Ron Huberman claimed a 2008 O’Hare Blue Line renovation project would achieve, but never did.

Funding for the nearly half-billion dollar project will come from a combination of federal, state and local resources, officials said.

“By modernizing the Blue Line we are creating more than 1,000 jobs while making it faster, safer, and more reliable for the millions of travelers that use it every year,” Gov. Quinn said at Thursday’s press conference.

Jared Melnyk, a commuter at the Blue Line California stop, said the O’Hare Blue Line didn’t seem slow to him. But he said he still supports the decision to upgrade the branch.

“I think spending money, in general, on auto transit is worthwhile,” Melnyk said. “I mean, I think we need more money in education too, but I’m a big supporter of rapid transit, so I’m happy to see money going towards this.”

Christina Seo, another commuter at the Blue Line California stop, agreed that the rail renovation project was a good investment.

“The Blue Line is occasionally on-point,” she said, adding that there are real service issues, such as trains running off-schedule.

Unlike CTA’s recent overhaul of the Red Line South Branch, where rail service was completely shut down for five months for construction, officials said the O’Hare Blue Line will remain largely open during the four-year renovation period.

Claypool said that the decision to maintain O’Hare Blue Line rail service during the project was primarily based on the fact that it’s the city’s only rail line to that airport.

Additionally, the Blue Line doesn’t have an alternate rail running parallel to it, as the Red Line does with the Green Line, he said.

Passengers can expect sporadic delays and service interruptions for temporary station shutdowns and overnight and weekend track work, officials said. Shuttle busses will be provided to transport riders to alternate rail lines during that time.

“I am not looking forward to this inconvenience,” said Samantha Agoos, a Logan Square resident without a car who rides the O’Hare Blue Line at least twice daily.

Agoos said the Blue Line is easy and convenient but definitely in need of major structural work. Over the last month she has seen at least three major leaks in the underground platform at the Logan Square stop, she said.

However, Agoos said some of the costly planned Blue Line improvements sound like luxuries, not necessities. For instance, the proposed $27 million in 4G Wi-Fi improvements for better connectivity on the Blue Line, with a focus on underground tunnels.

“I think Wi-Fi in the tunnels would be convenient, but unnecessary due to the significant cost,” she said. “We could definitely spend that money elsewhere.”