The Chicago Blackhawks took a break from their bar crawl with the Stanley Cup this week to take their celebration on a different route on Friday -- a parade through downtown Chicago and a rally on a warm, sunny summer day at Grant Park.

It was the second citywide celebration of the Cup, following the 2010 rally at Michigan Avenue and Wacker Drive. Chicago Police estimated Friday's crowd -- parade and rally combined -- to be at 2 million people.

Despite the fact the city had only a few days to prepare for the expected crowds, the number of fans who came out to show their support and partake in the festivities on Friday couldn’t help but leave Blackhawks captain Jonathan Toews in awe.

“This is unbelievable,” Toews said at the rally. “For the guys that were here in 2010, we didn’t think there was a chance that we could outmatch that performance by the fans, but you guys did it somehow.

“This shows how unbelievable this city is.”

According to the Chicago Police, the estimated attendance surpassed the 2010 attendance numbers, which were just more than 1 million.

A large percentage of those people arrived hours before the parade, waiting on Jackson Boulevard and Congress Parkway at Michigan Avenue to enter Grant Park for the rally.

With no rain or cloudy skies in the forecast, fans arriving early to get a good spot along the parade route or at the rally had to wait patiently in the hot sun.

Fans did plenty of hydrating and tried to keep themselves busy while they waited, by passing beach balls throughout the crowds and spraying water on people to cool off.

The parade began at 10:30 a.m. as the Blackhawks front office and players boarded red double-decker buses and departed from the United Center. The buses sped down Washington and turned on Columbus Drive, slowing and going south until they reached Grant Park.

Awaiting the Blackhawks was a giant sea of red and black stretched across Hutchinson Field. 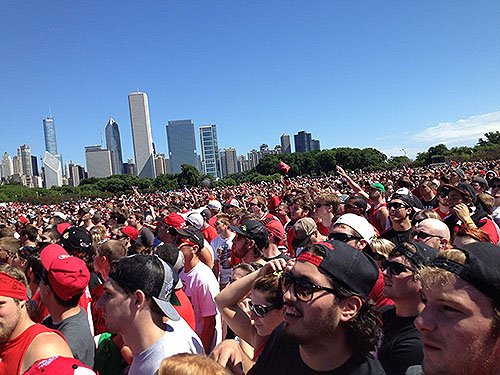 The rally began a few minutes later than the scheduled 11 a.m. start, but it did not seem to bother fans as the noise level skyrocketed once the coaches’ and players’ faces could be seen on the giant screens installed at the park.

Fans got a little bit of everything at the rally. Vice President and General Manager Stan Bowman announced the celebration as the best birthday he could ever have, and fans serenaded him with the "Happy Birthday" song. Gov. Pat Quinn -- who declared the day Blackhawks day in Illinois -- was booed loudly when he was introduced at the rally.

The crowd also got a few words from Blackhawks Coach Joel Quenneville, who thanked the fans for coming out and stressed how the city of Chicago is a special place to be.

“We’re all very fortunate to play in a special place here,” Quenneville said. “We’re all so excited about what just happened and the best part about winning this championship we get to share it with you our fans.”

However, none could surpass the level of excitement and cheers from the fans that the players received, especially Patrick Kane, who was showered with “M-V-P” chants as he made his way to the podium.

“The only reason this day is fun is because of all you guys coming out and supporting this team,” Kane said. “It makes hockey fun.”

Kane then presented the team's championship belt -- a symbol of the players' choice for the best playoff contributor -- to goalie Corey Crawford.

Crawford, who kept his emotions in check during the Stanley Cup Finals, provided perhaps the most colorful speech at the rally,  blurting out a couple of expletives.

“Fucking right Chicago,” Crawford said. “No one will ever take this away from us. We’re the champs.”

Blackhawks defenseman Duncan Keith made a memorable speech as well, reciting a famous scene from the film “Braveheart,” while putting his own spin on it.

“So I ask you Chicago,” Keith said. “Live today, with me and my teammates, as lions.”

Once the players finished addressing the fans, confetti fell on the stage and fireworks shot into the sky as the celebration concluded with a fan-led rendition of the Hawks' anthem “Chelsea Dagger” by The Fratellis.

Winning the Stanley Cup twice in four years has set the bar high for the Blackhawks, but alternate captain Patrick Sharp told fans that he wouldn’t  have it any other way. 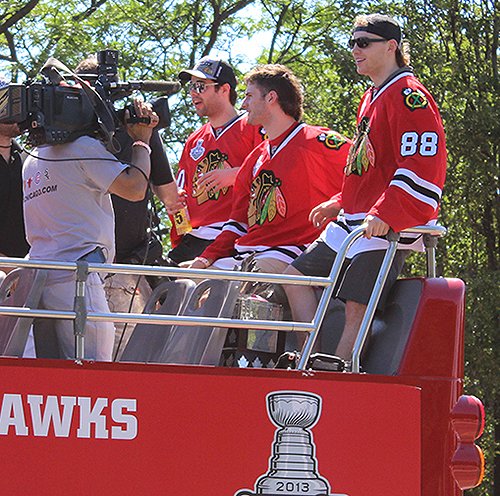 Patrick Kane is interviewed on the way to the rally. (Photo/Jakub Rudnik)