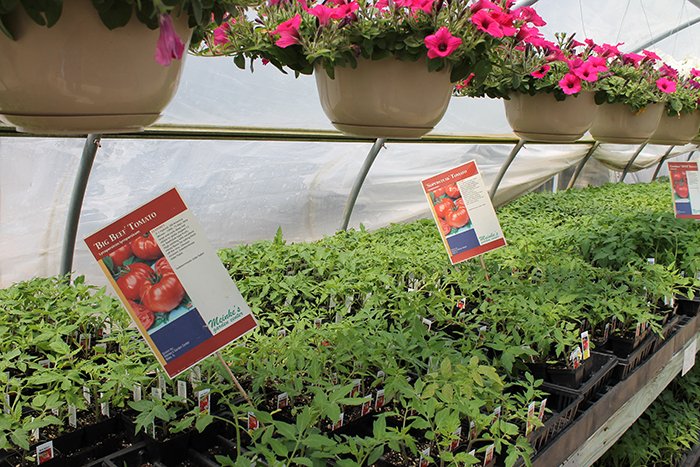 Backyard Gardeners Create Their Own Bartering Market in Chicago, Suburbs

A woman took a piece of dill and put it to her nose, rubbing it between her fingers. Her cart had a tomato plant, sweet pepper plant and sage.  She took a dill plant and added it to her cart.

The woman was one of many backyard gardeners examining the long tables filled with flowers and vegetable plants last spring at the Meinke Garden Center in Niles. She's part of an increasing trend in the Chicago area of people growing vegetables in backyard gardens.

Andrew Babochay, 50, carried a basil plant and looked at the sage plants.  He bought vegetables and herbs for his backyard garden this year.  Although he only has a small yard, he grows hot peppers, rosemary, basil and chives.

Babochay said he enjoys having vegetable garden because it is a convenient way to get fresh produce and herbs.

“When I’m cooking, I can go out in the yard and get something,” he said.

Babochay said he uses herbs like chive flowers “to add a visual appeal to his meals.”

Researchers from the University of Illinois, using satellites to survey urban agriculture in Chicago, found approximately 4,648 agricultural sites in the city in 2013.

Approximately 86 percent of sites were residential vegetable gardens, according to the report from researcher Jon Taylor of the University of Illinois’ Department of Crop Sciences.

Babochay said an interest in sustainability determines most why more people are having more gardens.

“More people are interested in knowing where their food comes from and want control over their health and what they are taking in,” Babochay said.

Sara Walsh, 34, a bookkeeper in Chicago, grows heirloom tomatoes, apples and peppers. There is too much processed food available for Chicagoans and backyard vegetable gardens can be an inexpensive way to get vegetables, she said.

“When I’m hungry I can just walk outside and pick something to eat,” Walsh said.

“My blood pressure went down and I feel better,” Trafelet said.

Pat Kushiner, 62, a copy editor, said she worries about eating fruits and vegetables covered in chemicals. People want to know what they are consuming and have control over what they are eating, she said.

Dennis Evans, 66, grows broccoli by his mobile home in Wheeling, and cooks the broccoli for his daughters when they come over.

“Produce is getting more expensive and growing vegetables means less you have to buy,” Evans said.

The cost of vegetables increased this year -- including a 0.7 percent jump just in April -- due to the drought out west that reduced fruit and vegetable crops, according to the Bureau of Labor Statistics.  Prices are expected to rise even higher this summer, analysts said.

Many of the gardeners said their green thumbs saved them money.

“I freeze tomatoes and they last me the entire year,” Kushiner said, adding that she does not have to buy certain vegetables even in the winter.

Using satellite images, researchers found that a large amount of residential vegetable gardens were located in food deserts, where there are few grocery stores, including the Bridgeport and Chinatown neighborhoods.  Backyard gardens can help compensate for the lack of quality foods in these areas, according to Taylor’s report.

Trafelet said she shares her produce with neighbors who grow different vegetables than her.

“One neighbor grows tomatoes and cucumbers, and she leaves one cucumber plant by the fence so anyone can take cucumbers for free,” Trafelet said.

Kushiner said gardeners trade their home-grown vegetables at the church.

“They say, ‘I’ll give you four beets for two cucumbers,’” Kushiner said.

“You feel proud you can grow things and eat your own veggies,” Kumnerdmer said.

Trafelet said she enjoys maintaining and growing the vegetables.

“It’s my therapy, working with the earth and exercising,” Trafelet said.  “The garden is my sanctuary and I love being out there.”

This story was written in Heather Cherone's Intro to Journalism course at DePaul University's College of Communication.