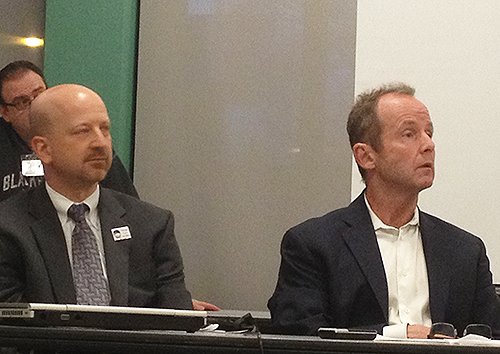 BREAKING UPDATE: Late Sunday night, the Cubs announced they had struck a deal with the city to renovate Wrigley Field and add a hotel across the street from the park on Clark Street. The $500 million plan includes a 5,000-square-foot video board in left field, expanded bleachers, 40 night games, street fairs, more 3:05 p.m. starts and several other updates. Check back for more updates ...

Ald. Tom Tunney (44th ward), residents, and Chicago Cubs and city officials gathered Tuesday night to discuss the Cubs and negotiations to renovate Wrigley Field. The final score: a lot of talk but no deal expected for ballpark renovations by the April 1 deadline the Cubs sought.

Lakeview residents raised concerns about the possibility of additional night games, real estate development -- including a planned hotel across Wrigley to be built by Cubs owner Tom Rickets -- from and concerts. The greatest concern of attendees at the meeting was parking and traffic.

"My job is to make sure we have a comfort level in the community," Tunney said. "We have a supportive mature community that isn't getting rattled."

Tunney said he will continue to listen to the residents’ feedback about the quality of life in the neighborhood.

The Chicago Cubs opening day is April 8, and the Cubs and Wrigleyville rooftop owners have yet to reach an agreement on the team’s proposed $300 million renovation plan. The team rejected a revenue-sharing advertising proposal in January from the rooftop owners, who fear the Cubs could build a large jumbo scoreboard in right or left field and block the view of the ballpark from the rooftops. Rooftop owners make thousands of dollars from charging fans to sit up there.

The rooftop owners' plan would allow the Cubs to sell ads on digital video scoreboards that would be constructed on the rooftops on Sheffield, Waveland and Kenmore avenues.

“They've got to understand that this is a very successful community,” Tunney said. “[We’re] working with them trying to make that stadium ready for the World Series in the next hundred years."

With Monday's deadline quickly approaching, both the Cubs and Wrigley rooftop owners are starting to feel the pressure. Mayor Rahm Emanuel has told both sides to "work it out." However, Tunney said he's confident they can still come to an agreement.

"There is mutual respect and I think we can get a deal done,” Tunney said.

Julian Green, Cubs vice president of communications and community affairs, said the team will work around the clock to deliver a plan good for everybody in the community.

"I think anything is possible and the reason that we are trying to talk and hammer this stuff out every day means that there is a possibility for success,” he said.

Green also says the Cubs want a deal that’s best for the neighborhood.

“A deal that’s good for the city of Chicago,” he said. “A deal that brings jobs and economic development to the city.

“We are trying to work out issues not only with rooftop owners, but business owners and residents.”

One thing that officials made clear Tuesday night was that Wrigley Field will remain in its current location. Reports last week said that Rosemont was trying to woo the Cubs to the northwest suburbs with a sweetheart land deal for the Ricketts to build a new staidum. Tunney says that’s untrue.

"We have utmost respect for investment at Clark and Addison for the last 100 years," Tunney said. "Why would anyone want to see a landmarked ballpark (and a) great ballpark leave?

"The other side is that it's a very successful congested neighborhood, some of the ideas belong in an area where they would have a little more latitude … parking."

Much of the meeting, which drew about 100 people to a police station meeting room near the ballpark, focused on neighborhood complaints about parking, limos idling near homes and public urination by fans. The team also discussed its plan for 30 night games this year -- including some more Saturday night games -- and possible 3:05 p.m. starts for some Friday afternoon games. The late Friday starts drew mixed reactions from the public.

A closed-door meeting, which Tunney anticipates will further discuss the renovations and the proposal of a hotel, plaza area, and remote parking, will be held Wednesday night.